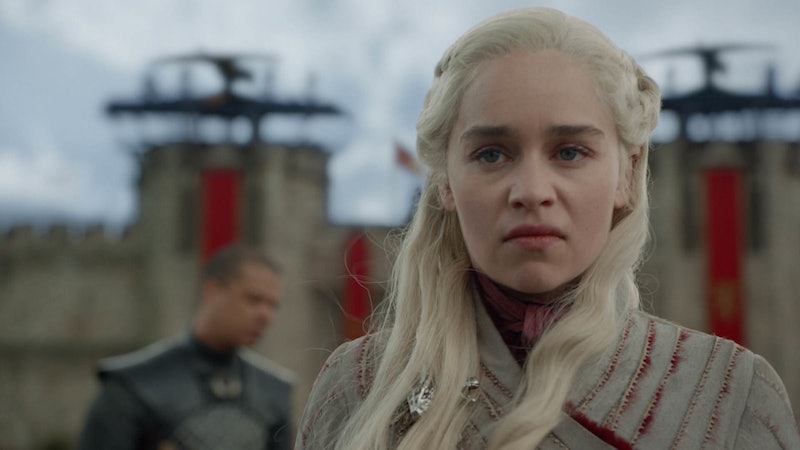 Game of Thrones has always been a show known for inspiring massive fan theories. One of the best parts about being a fan of this show is all the hypothesizing going on outside of the episodes. Even though it's finished for good, does that mean GoT fans stop with the conspiracies? Nope, of course not. One week after the controversial series finale, there's a new Game of Thrones theory that suggests Daenerys could still be alive, even after Jon unexpectedly stabbed her, and to be honest it's quite good and is pretty convincing.

As viewers all saw, Daenerys became the Mad Queen in Season 8, whether you agree it came out of no where or think her story was done justice. And, instead of talking it out with Dany or trying to work towards a better, more sane future with her as queen, Jon Snow stabbed her with his dagger, ending her life. In Dany's final scene, a distraught Drogon melted the Iron Throne to the ground, and flew off with his mother in his claw. It's not explicitly said where Drogon is taking Dany, but a new theory suggests Drogon is taking her somewhere she can be resurrected.

There are two versions of this theory, but both are pretty similar. One, as reported by Esquire, came from Reddit user Psyduck-Stampede, who suggested that Daenerys is being taken to Asshai to "become the Undead Dragon Queen of the Shadowlands." Fansided, however, reported a theory that Drogon was taking Dany to Volantis to be resurrected. Here's everything Game of Thrones fans need to know to understand this new theory, and figure out whether or not to believe that Dany could still be alive.

Asshai is a port city shrouded in mystery and the farthest east the Known World maps go. And the place sounds like one of nightmares with a corpse city, no living plants or animals, and dragons (important!). It's also a mystical land where Dany's dragon eggs were rumored to have come from, and it could hold untold powers.

Volantis is the home to the Temple of the Lord of Light, the god Melisandre worships. It's also where Kinvara comes from, the high priestess who told Tyrion and Varys that Daenerys is the one who was promised. Assuming that the priests and priestesses of Volantis still think this, or at least hold allegiance to Daenerys, they might be inclined to use their powers to bring her back. Maybe dying was part of her greater destiny to becoming the queen she was meant to be.

Where Was Drogon Going?

In one of the final scenes of Game of Thrones, Bran's council of advisors discussed whether they might go looking for Drogon. "He was last seen flying East, towards Vo-" Sam said, before being cut off. It sounds as if Sam was hinting at "Volantis," which supports the Fansided theory that Drogon was taking Dany to the Temple of the Lord of Light. That said, he also says Drogon was spotted going East, which is also where Asshai is. And, as this theory suggests, "Volantis" is actually what Sam was about to mention before he got cut off, and if so, the GoT finale definitely hinted that Dany could be revived in the future.

How could Drogon know where to go?

Dragons are a lot smarter than you'd think, and their intelligence is hinted at in the show through the connection they share with Dany, and Drogon's last move with the Iron Throne. Some may doubt that Drogon meant to destroy the throne to make a statement against power and the monarchy, but it's quite possible.

Dany (or Melisandre) could have somehow shared knowledge with him of Volantis, and he probably has an instinctual connection with Asshai. It's where dragons reign, or did in the past, and any magic there could be calling to the dragon.

What could it mean for Daenerys?

If Drogon brings Daenerys to Volantis, the allegiance those holy people have to Dany would encourage them to bring her back. And, in that case, she'd be free to do what she wanted — or whatever they thought she was destined to do. However, if the reddit theory is correct and she is being taken to Asshai, she might not be brought back to life quite so easily. According to Esquire, she'd be the Undead Dragon Queen of the Shadowlands, possibly becoming another version of a White Walker, the Night Queen.

Whichever theory you choose to believe, it all points to the same end: Dany coming back to life, proving that her story is far from over.