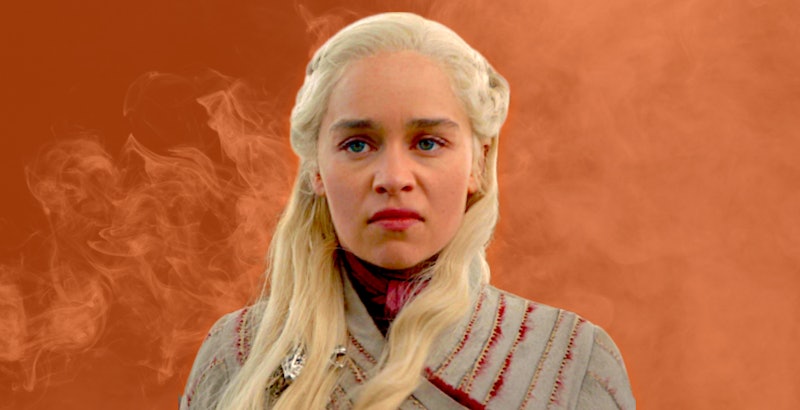 For seven seasons, Game of Thrones viewers have watched Daenerys Targaryen contend with what it means to be a good ruler in the shadow of her father, the infamous Mad King. Up until recently, it seemed that despite some flare-ups, she was determined to be the just ruler her father wasn't. Season 8, however, is determined to erase all that by doubling down on suggesting that her ambition and impulsivity will lead Daenerys to become The Mad Queen. But by trying to force her to be the heir to her father’s madness, the show has lost the complexity that made Daenerys a hero from the beginning. The worst crime the show's creators committed in "The Last of the Starks" was using actual emotional setbacks to signal Dany’s descent into madness. They equated a woman’s rightful anger with "crazy," and I don't buy it.

For few seasons now, Daenerys Targaryen, flanked by three full grown dragons, a disciplined Unsullied army, an indestructible Dothraki army, envious fleet, powerful allies, and devoted advisers, was the unbeatable ruler of the show. Caught in the glamour of her power, it is easy to forget that Daenerys, unlike Cersei or even Jon, was not born in the lap of privilege. She earned her way to the top.

As a baby, she was in exile, always on the move in fear of being killed. She was raised by a petulant and abusive older brother who was obsessed with the Iron Throne. He sold her off to the leader of an unruly tribe, who then forced himself on her during their wedding night. She grew to love this husband, then lost him and their child to the dark magic of a witch. Daenerys built a following from virtually nothing, and amassed a devoted army by freeing them from slavery. She is Mhysa, a mother capable of great deal of affection and sympathy. Her quest for the Iron Throne, then, is also her quest for a home that was stolen from her family.

But in Season 8, the show reduced Daenerys to her most vulnerable. The selflessness she displayed by abandoning her mission and joining forces with Jon to save humanity was never thanked. She is still unwelcome in the North, still looked at as a foreigner. Four episodes in, she has lost two of her dragons, whom she considered her children; her most trusted advisor Ser Jorah, her closest confidant Missandei, and a good chunk of the army that pledged its allegiance to her not for money or out of force, but because she earned it. Yet the show insists on painting the anger she feels, the vengeance she undoubtedly craves, as a sign of madness. Does this hit awfully close to home?

Propping up a male candidate to the throne over a woman who has worked her butt off to get here feels like an especially Machiavellian scheme.

In "The Last of the Starks," with Jon’s parentage out of the bag thanks to an incredibly uncharacteristic and petty Sansa hinting at it to Tyrion, all of Daenerys’ surviving advisers are starting to consider Jon Snow a better option for the throne. He’s level headed, they say. A Targaryen and a Stark, he will be the one to unify the North and the South. But the underlying reason is more sinister. “He’s a man,” Varys says, “which makes him more appealing to the Lords of Westeros.” Varys is adamant that it is in fact a lack of interest in ruling that makes Jon the better ruler. Where was this forethought by the famed master of whispers when he rallied to get Daenerys on the throne in the first place? By positioning Jon as the more acceptable ruler, the show is dialing back to its patriarchal beginnings, undoing the heroic character arc of Daenerys Targaryen.

Game of Thrones has always served as a high fantasy mirror to our contemporary times. The patriarchy, the class separation, and fascist policies of the rulers makes the show feel relevant to the present day. But propping up a male candidate to the throne over a woman who has worked her butt off to get here feels like an especially Machiavellian scheme. By projecting Daenerys as too emotional, unpredictable, and uncontrollable for the throne and Jon as too tempered, the show reminds us of the mental gymnastics people go through in the real world to declare a woman unfit for power. (Nevermind that Jon has, until now, displayed no actual ruling caliber.)

So let’s be clear about this. If there is a Mad Queen on the show, it’s Cersei Lannister. She's the woman who blew up the Sept, killing a good portion of the townspeople all in the name of revenge. The woman who opened up the gates so there could be more common casualties in the war for power. The woman who chose to stay back, and let the rest of the world die in the fight for humanity. The woman who sent a hitman to murder her own brother. The woman who has had a hand in manipulating every evil political scheme on the show. Daenerys has done little to earn the title by comparison.

Daenerys certainly has the fiery temper of the Targaryens — especially given all the inbreeding, there is cause to believe that she could come untamed. But in "The Last of the Starks," she was remarkably reined in. She agreed to the peace talks, and resisted from storming the capital. After the deaths of those closest to her, it's understandable that she would now seek revenge. And if we see that next episode, it will be vengeance rightly served.