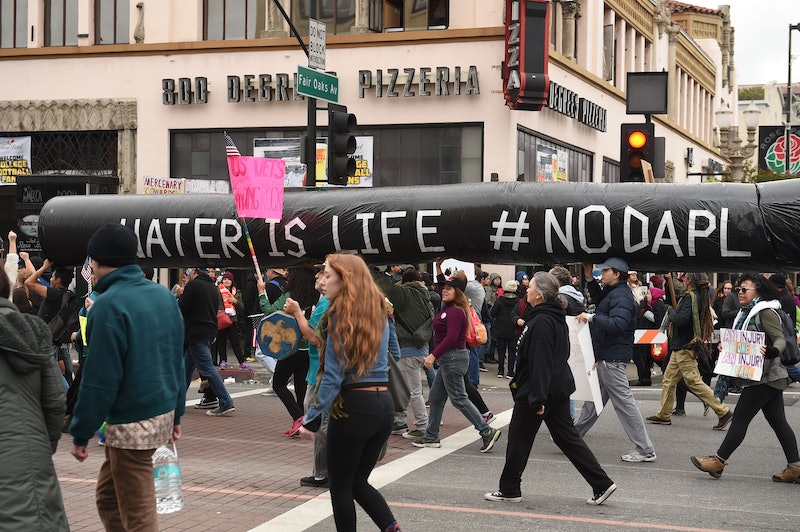 Just a few hours after Donald Trump signed an executive order on Tuesday to move forward with the contentious Dakota Access Pipeline, community organizers in New York were already planning No DAPL protests to try and prevent the project from moving forward. A rapid response protest planned for Tuesday evening will take place just a few blocks away from Trump's Manhattan headquarters as citizens fight to prevent the environmental issues and degradation of indigenous rights that the pipeline would entail.

Though few details of the executive orders have been released, the little being reported out of the White House right now does not look good. Trump's order also enabled construction on the infamous "pipeline to nowhere," the Keystone XL, which was rejected by President Obama at the very beginning of his administration. Both projects would create thousands of miles of new pipeline connecting Canada and the Texas Gulf shore, where hundreds of refinery sites produce the lucrative byproducts of natural gas.

The DAPL controversy started nearly a year ago when LaDonna Brave Bull Allard of the Standing Rock Sioux tribe founded the Sacred Stone Camp at the pipeline construction site. In September, she penned a stunning essay for Yes! Magazine explaining why the Water Protectors were taking a stand for their river.

Where the Cannonball River joins the Missouri River, at the site of our camp today to stop the Dakota Access pipeline, there used to be a whirlpool that created large, spherical sandstone formations. The river’s true name is Inyan Wakangapi Wakpa, River that Makes the Sacred Stones, and we have named the site of our resistance on my family’s land the Sacred Stone Camp. The stones are not created anymore, ever since the U.S. Army Corps of Engineers dredged the mouth of the Cannonball River and flooded the area in the late 1950s as they finished the Oahe dam. They killed a portion of our sacred river. I was a young girl when the floods came and desecrated our burial sites and Sundance grounds. Our people are in that water.

In addition to the sacred history of the land, the Standing Rock people were fighting against the high potential for environmental damage inherent in these projects. Oil pipelines have an unfortunate tendency to leak, decimating local ecologies and straining resources of local environmental agencies left to deal with the aftermath for decades. The Sioux also still drink from the waters of the Missouri River, where the pipeline would cross, putting them in danger of environmental displacement.

Thanks to Allard and the hundreds of indigenous peoples who camped out in freezing temperatures and endured police violence, the Obama administration denied the final permission needed to complete the pipeline in early December. It was a victory, but a tentative one in the face of the previous month's presidential election. The reversal of the decision felt like a looming reality, and the announcement from Trump's White House Tuesday had the unusual quality of being entirely expected.

But community activists are wasting no time organizing the resistance, which kicks off Tuesday night near Trump's home. The stakes of the pipeline are far greater than just shifting gas prices or a quick fix for jobs, and protest will hopefully prove that to the administration. Between the environmental, moral, and social implications, the DAPL isn't a risk Trump needs to take right now.