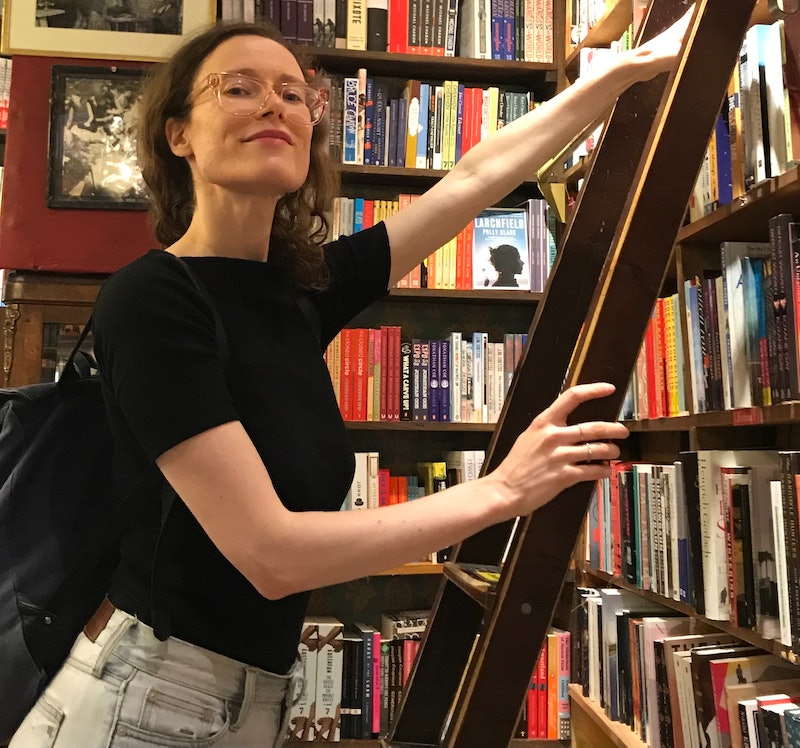 When I was two years old, I started taking dance classes. I remember twirling to “The Itsy-Bitsy Spider” in a small room made for small people, wearing a pink leotard and tutu and ballet slippers.

When I was six, I started modern dance classes with Ellen Robbins at Dance Theater Workshop in New York. This was the beginning of a years-long love affair with modern dance, culminating my freshman year at Bennington College, where I thought I’d study dance and writing and figure out later which would win. Spoiler alert: It was writing. I loved dance, but I chose not to pursue it professionally; the competition and tough life was not for me. (If that’s what I was worried about, I should not have chosen writing either, but that’s another story.)

Though I didn’t become a dancer, I held onto what I learned over the course of many years in several dance studios. Sure, I remember how to do a plié and a jeté and an arabesque, and I could probably do some contact improv if pressed. But what I really pirouetted away with was a lasting sense of self-expression. Dance taught me how to express myself and understand others, and gave me nonverbal communication skills that I wouldn’t have if I hadn’t spent every weekend and some weekday evenings throughout my childhood practicing.

If you can get up in front of other people and use your body to transmit a feeling, and you do that over and over every week, eventually you will probably internalize the idea that it’s OK to be seen.

There’s nothing quite like dancing onstage in front of an audience. I probably won’t do that again, but I remember what it feels like to try to convey something with my body without words. And in countless conversations since my last performance, almost 20 years ago, I have used what I learned to communicate.

I am sensitive to body language, attuned to the way people hunch their shoulders and use their limbs when they speak. And I try to make my own body a safe place from which to communicate: open shoulders and good posture make for a projection of an open heart.

This affected how I saw my own body as well. I spent countless hours of my life with nothing more between me and the world than a piece of stretchy cotton, and I think those years ultimately taught me to be comfortable in my body.

It’s a scary place out there for women sometimes, with the internet, men, and even other women telling us how we should look and act and behave. I was not impervious to pressure to be thin as a dancer, nor am I now. But I think — I hope — I have always had a relatively solid understanding of myself and my body thanks to dance.

Perhaps this can be chalked up to strong self-esteem in general, something I certainly wound up with thanks in no small part to dance. It would be too simple, though, to say dance set me up for life in all of these ways, without including the fact that I struggled significantly in my twenties. It has taken a lot of work to build my self-esteem to the point it is today. That said, there has always been an underlying sense of who I am through it all, and I credit dance for that. If you can get up in front of other people and use your body to transmit a feeling, and you do that over and over every week, eventually you will probably internalize the idea that it’s OK to be seen.

My childhood was tough. Every year for our performances, we choreographed a three-minute solo, choosing our music and title, and making a placard on poster board for display before the dance. While my parents were going through a contentious divorce, when I was about 10, I performed a dance I called “Emotion,” set to an instrumental Smashing Pumpkins song. The poster was covered with what would now be called emojis, and I dressed in a white unitard and danced my heart out.

It doesn’t take a child psychologist to puzzle out what I was trying to express with that one. I think I walked away from that solo and the others I choreographed and performed over the years with the idea that it is fine — even good — to tell other people how I’m feeling, and that’s an instinct I’ve carried to this day.

As an adult, there have been no shortage of difficult conversations. Especially in romantic relationships, I have found myself in situations that require me to be emotionally vulnerable and honest, and communicate what I think and feel and need. I’ve been told that I am especially adept at these discussions, which I think is true. It is difficult and sometimes painful to tell another human being how I feel. But I can do it.

Dance is a give and take: When dancing with others, I was constantly in tune with where other dancers were in the space, what they were doing, and what they would do next.

And in these exchanges, I use my dance training to notice what others are experiencing as well. Dance is a give and take: When dancing with others, I was constantly in tune with where other dancers were in the space, what they were doing, and what they would do next. This was true with choreography, but even more so with improvisation, which required us to communicate without words.

Once I spent 45 minutes improvising with two friends during class in my freshman year of college. It was supposed to be a short improv, 20 minutes or so. The three of us fell into a pattern that was nothing like anything I’d experienced before or since. We were speaking to each other with our bodies. I knew exactly where they would be next, which meant I could move in concert with them without worrying about clashing, and we were able to lead and follow each other easily. Slowly the rest of class stopped dancing, and watched us dance.

Those moments were rare, but they were a formative part of my dance background. And though it’s tempting to pretend otherwise sometimes, I am usually pretty aware of the way my loved ones are feeling when we communicate. The hard part comes when I challenge myself to be attentive to those subtle body language cues — and listen to myself, trust myself, and say what I need to say. It’s all a dance.

More like this
11 Super Bowl Instagram Captions To Use On Game Day — Even If You Don’t Like Sports
By Alexis Morillo
These Artists Are Reimagining Black History Month To Create A Better Future
By Katie Mitchell
25 Inspiring Quotes From Black Women To Celebrate Black History Month
By Kyli Rodriguez-Cayro and JR Thorpe
The 6 Best Sunglasses For Snow
By Lauren Moison
Get Even More From Bustle — Sign Up For The Newsletter
From hair trends to relationship advice, our daily newsletter has everything you need to sound like a person who’s on TikTok, even if you aren’t.