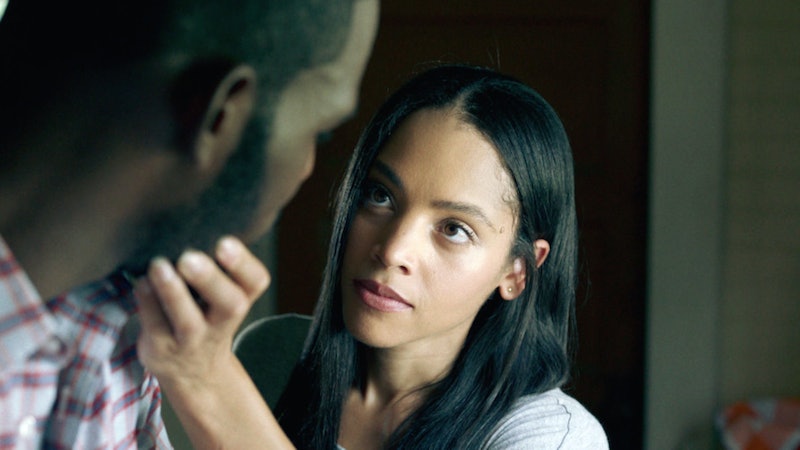 After a mid-season break, Queen Sugar — about three Bordelon siblings and their battle to keep their late father's sugarcane farm up and running — has returned with some of the most dynamic storytelling on TV today. Although, this season the Bordelons aren't the only ones commanding the screen. Instead it's Bianca Lawson's Darla who is dominating Queen Sugar with her heart-wrenching portrayal of a recovering drug addict.

Many television shows have attempted to capture the downward spiral of addiction, as well as the effects that an addict's choices have had on their families and friends. But few series have shown the redemption stage of recovering addicts as they struggle to reintegrate into the world the way Queen Sugar does. OWN's hit series realizes that for all of pain inflicted on loved ones during a drug addiction, the toughest battles remain with the person in recovery, and in this case it's Darla who's charging on through.

The formerly absentee mother to Ralph Angel's son Blue, Darla was all but banished from the Bordelon family for much of the first season. She struggled to convince them that she was clean, sober and ready to be a parent again. To prove how serious she was to the family — who stepped in to care for Blue while she was away — Darla secured a job and regularly attended Narcotics Anonymous meetings. And finally in the early half of Season 2, things started to look up for her. She took a different job as Charley's assistant at the mill, grew closer with Blue, and even rekindled her relationship with Ralph Angel, leading to an engagement at the end of the mid-season finale.

In the mid-season premiere, directed by legendary filmmaker Julie Dash, newly engaged Darla and Ralph Angel share the news about their impending nuptials with everyone at a engagement party thrown by Aunt Violet. Darla should be beaming with joy but instead fans see Darla crying on the phone. With her voice shaking, she leaves a dreary voicemail for her estranged parents about her upcoming wedding in hopes that they will come. After hanging up she briskly wipes her eyes and returns back to the party, as a diner door baring a "congratulations" sign ironically swings behind her.

As a woman of few friends and no family, Darla later goes wedding dress shopping with Charley. It's a sad day as Darla, hesitant to enjoy the moment, doesn't believe Charley when she says she looks beautiful. It's almost as if Darla doesn't think she deserves to be happy after everything she's done in the past. She goes on to confess to Charley that she called her parents, recalling how she "always wanted to make them proud," and how by making that call, part of her still was.

Later in one of the most infuriating moments of the premiere, Darla walks out of a gas station store, while a man leaning against a car in the parking lot refers to her as “Star.” She quickly picks up the pace and attempts to rebuff him but the man won't give up. “Nah, I’d recognize that ass anywhere,” he shouts behind her. Pumping gas, Ralph Angel watches nearby as Darla jumps into the truck. When asked if she knows him, Darla says no, but her tears make it clear that she does.

At home Ralph Angel barely looks at her clearly upset over the whole debacle. “This is the first night living in this house and you’re acting like you don’t want to be anywhere near me,” Darla says. Ralph Angel responds by saying he knows she knew the man from the gas station.

Since they got back together Ralph Angel has struggled to understand why Darla's recovery. He scoffed at her want to still attend NA meetings after being sober for two years. He guilted her into leaving a job that was crucial to her recovery early one day — thus getting her fired — just so that she could be there for him when he was having a tiff with his sisters. He even bristled at her suggestion that they attend pre-marital counseling, convinced that some "preacher that ain't never been married" couldn't teach him how to be a husband. Ralph's faulty moral compass, need to constantly be in control and commitment to ragging on Darla at every turn, perfectly illustrates what some addicts deal with from loved ones daily.

According to the National Institute on Drug Abuse, 40-60 percent of recovering addicts will relapse at some point. These relapses are usually triggered by stress and linked to particular things like certain people, places, and moods. Unfortunately that means that Ralph's unsupportive comments and the pressure he's putting on Darla to rejoin society at a quicker pace might just be what sends her back on a downward spiral later in the season.

Through a powerful and unique portrayal of addiction Queen Sugar shows that Darla shows is more than the sum of her mistakes and instead is simply a human being who longs to have a fresh start. Fans had grown used to Darla taking Ralph Angel's — and everyone else's — constant criticism and snide comments in stride, but finally in the premiere she had had enough. Darla makes her request for a new beginning abundantly clear at the end of the episode when she tells Ralph Angel that she won't marry him so long as he treats her like she's nothing more than damaged goods. "You can’t keep punishing me,” she says before carrying her pillow out of the room to sleep on the couch.

It's only five words, but the line packs a serious punch. Darla understands that while she's hurt a lot of people and can't erase her mistakes, she doesn't have to allow Ralph Angel or anyone else to insult the progress she's made and will continue to make — a moving testament to all those out there watching and recovering from addictions of their own. Her character shows that while the road to redemption might be long and rough, it's all about taking things one day at a time.