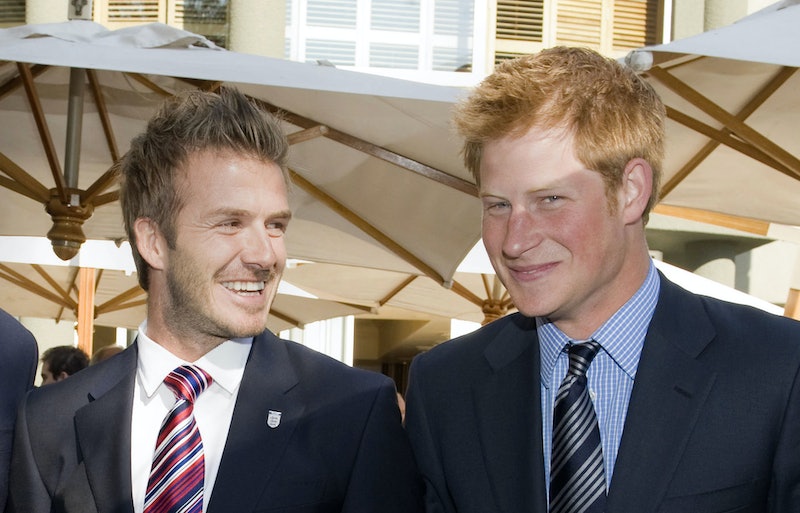 It sounds like the synopsis of a buddy comedy: a young prince meets a world famous football player and they form an unlikely yet long-lasting friendship. David Beckham and Prince Harry have long supported each other in professional and personal capacities, and with the royal recently following in his friend’s footsteps and making the move to North America, Beckham had the nicest things to say about Harry and his parenting to nine-month-old son Archie.

Asked by Entertainment Tonight yesterday (Feb. 26) about Harry, Beckham said: "I haven't spoken to Harry about him moving. We speak as friends and that's the most important thing for me." He continued:

“I think he's enjoying being a young father for the first time and that's what we always spoke about. When you are a parent, it changes everything for you. He always needs to be happy.”

While Harry and Meghan have come under some criticism for ditching life in the UK to move across the pond, dad-of-four Beckham, who splits his time between the Cotswolds and U.S., said he was really “proud” to see Harry carve out his own path since the birth of his son.

As Bustle has previously reported, the royal and footballer player have shared a bromance ever since they first met back in 2010, with Beckham later attending Harry and Meghan’s epic wedding in 2018 with his wife, Spice Girl and fashion mogul Victoria Beckham.

While details of what guests experienced on the big day have naturally been pretty hush-hush, Victoria let slip a few details to the Evening Standard, saying: “It was such a beautiful, incredible wedding. It was just the best day. They looked so happy, and everybody was just so happy for them. Meghan seems like a genuinely lovely woman, who really loves him. It felt very real, very honest.”

Having always had a good eye for style, Meghan has continued to show support for her friend by wearing Victoria Beckham’s clothing line on multiple occasions, even picking out an all-VB outfit to attend church on Christmas Day in 2018.