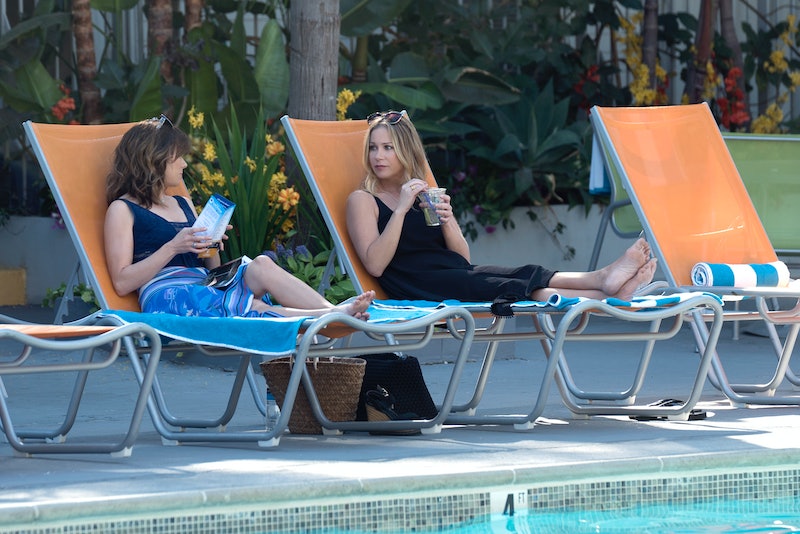 Losing someone you know is tragic. Losing the person closest to you is completely life altering, and almost impossible to get over. Dead to Me, Netflix's new half-hour series, is about just that: Jen (Christina Applegate) is a sardonic widow determined to solve her husband’s recent hit-and-run murder, and Judy (Linda Cardellini) is an optimistic free spirit who’s recently suffered her own tragic loss. They're two totally opposite women who become unlikely friends after meeting at a grief support group. Every detail about this new series revolves around the saddest moments of these characters' lives. And yet it's not a drama — it's a comedy.

That might sound like a mistake, but it's not. Dead to Me, which begins streaming May 3, is a dark comedy that's shockingly addictive and twisty despite its label. It's unlike anything you've seen before, as it plays with tone in ways that will constantly surprise you. You wouldn't think that a show about death and grief would be funny, but the series will make you laugh when you least expect it.

"I don't know if you can find the humor, I think humor finds you," Applegate tells Bustle of what happens during your lowest moment in life. "Humor gives you a break, you know what I mean? When I've gone through my darkest moments, the last thing I wanted to do was laugh at something. But something will happen and [it] makes you laugh. It's like the universe allows you to take a breath."

"You're in such a dark, deep place that humor just lifts you out for a minute."

Cardellini, who plays a woman struggling with multiple miscarriages and a failed marriage as a result, thinks that the comedy is what makes Dead to Me so relatable. "There's talk about laughing at a funeral because it happens, not because it's funny that the person has passed," she says. "You're in such a dark, deep place that humor just lifts you out for a minute."

For Applegate, bringing Jen's journey to life reminded her of when she first became diagnosed with breast cancer in 2008. "When I was sick many years ago, I was in the hospital and I remember walking down the hallway and it was such a bummer," she says. "I was having to learn how to walk and I was in pain. There was a sign on one of the patients' doors that said: 'Nothing per anus.' I just stood there and I went, 'Like nothing? Not even this pen?'"

Both Applegate and Cardellini start to laugh. "We all, standing in the hallways, were just cackling," Applegate adds. "That became the joke of the century. Like really, you can't put anything, nothing per anus? Don't go into that room and put anything into that guy's butt. I was in the hardest time in my entire life but that happened. Life just happens and takes you out of your darkest moments."

Cardellini reminisces about a time when she couldn't stop herself from cracking up during a serious moment. "I remember this one funeral I went to for someone who was close to me, when they were closing the mausoleum, someone had put a singing bear in there and as soon as the drape closed you hear this Elvis song coming out and everyone just lost it," she says.

On Dead to Me, both Jen and Judy are going through some of their darkest moments. Jen's husband was just killed in a hit-and-run accident, and the case is still wide open. Her husband's killer got away. Judy just suffered yet another miscarriage and no longer has the support of her significant other to help her get through her grief. And yet, their lives go on. Small moments, like what happened in Applegate and Cardellini's real-life memories, take them out of their grief and remind them that they're still alive. Dead to Me excels in finding the real-life hilarity in something that everyone will have to deal with at some point in life.

"That's the hardest thing about when darkness or trauma hits, you realize people are still living life while yours has fallen apart," Cardellini says. "Then you find yourself doing exactly the same thing because life ends up going on. You just have to move forward."

It's hard to talk about some of the biggest aspects of Dead to Me, because much of the later episodes rely on the mystery of all the major reveals when it comes to Jen's husband's murder. The dark comedy becomes a murder mystery, and that's pretty much all that can be said without spoiling what makes the series work so well. But James Marsden, who plays Judy's ex Steve, is proud of how the show is able to realistically balance humor, grief, and suspense.

"As soon as you have a preconceived idea of what life's supposed to be, life humbles you and spins you around in a way," Marsden says with a laugh. Dead to Me works because it does that, too. "It's like having a tender conversation with a friend and then a bird takes a shit on your head. That right there is what you see all through Dead to Me. Metaphorically, that's what is going on."

Marsden is amused that the show is even billed as a comedy, because to him, it's impossible to nail down just one genre. "There's this great feeling of we're doing something different, something special, in our confusion of how to label it," he says. "I like that the comedy comes from moments where you go, 'Should I even be laughing at that? Should I feel guilty about laughing at this?'"

If you learn anything from watching Dead to Me, it's that the answers to those questions are yes and absolutely not.

More like this
How Much Are The 'Schitt’s Creek' Stars Worth?
By Hugh McIntyre
‘SNL’ Finally Spoofed Nicole Kidman’s Weirdly Beloved AMC Ad & Nailed It
By Stephanie Topacio Long
'Interview With The Vampire's Lestat Is Sam Reid’s Biggest Role Yet
By Kadin Burnett
Jonathan Bailey’s BTS ‘Bridgerton’ Photos Celebrate 6 Months Of “Kanthony”
By Stephanie Topacio Long
Get Even More From Bustle — Sign Up For The Newsletter