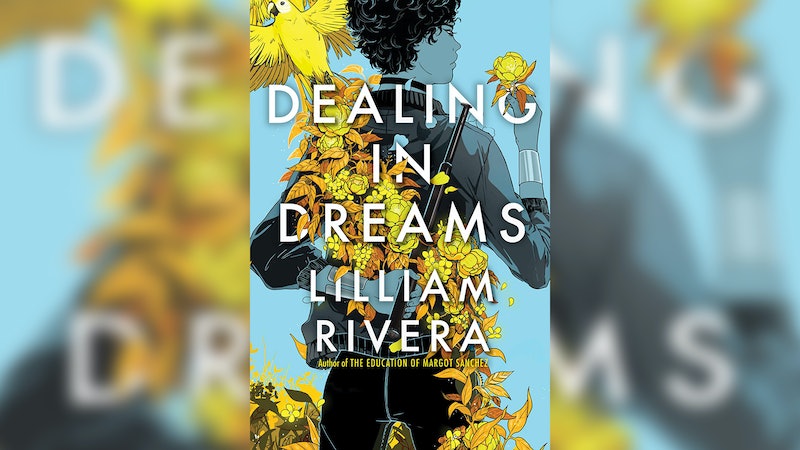 In 2017, author Lilliam Rivera made a splash in the world of young adult literature with her debut novel, The Education of Margot Sanchez, a Pretty In Pink-esque story set in the Bronx. Now, Rivera is back with a very different story: Dealing in Dreams is a dystopian novel about sisterhood, class, and the length to which a person will go to create a life of stability and security for themselves.

Dealing in Dreams is set in Mega City, where 16-year-old Nalah leads the area's fiercest all-girl crew. Together, they plot throwdowns and celebrate at the city's boydega clubs, where partiers pop pills called "sueños" like candy. But Nalah doesn't need a sueño pill to envision a different life for herself: She dreams of breaking free of this cycle and securing a home in the ultra-exclusive Mega Towers. In order to do so, she must prove herself to the city's founder — and that involves a journey to the other side of the border in search of a mysterious gang, the Ashé Riders. But Nalah quickly realizes that this quest may force her to do the unthinkable — and she must decide if it's worth it to get what she has always wanted: a home.

Dealing with Dreams is available now wherever you buy your books. Read an excerpt of the book below:

Provocative images of guys in various forms of undress cover the walls of the boydega from their latest calendar, the Papi Chulos of Luna Club. One papi flexes his muscles, another admires himself on a full-length mirror, and another sucks on a lollipop. When I was young and lived in the training camp, papi chulo trading cards were given to those on good behavior. I collected the cards and traded with others, professing my undying love for my favorite. My preference always leaned toward the papi dressed as a scholar by way of thick, black-rimmed glasses and an open book on his lap. He looked smarter and hence more approachable. The chulos here are kept forever young with a fresh crop of candidates willing to strike a pose.

I peel off my jacket, remove my cuff, and thrust my arm under the detector. I can’t shake the uneasiness I’ve felt since the run-in with the ANT. I sent Nena, Smiley, and Shi back home. Nena’s carelessness caused the rest of them to get screwed out of papi action.

Doña Chela offers a toothless grin when the mandatory bell rings the rank of our crew. Only the top-five gangs gain VIP entrance to this particular club. Everyone else who wants to party in the Luna Club must contend with begging for access. If you’re not VIP, expect to wait hours to get in, if you get in at all. The embedded numerical rank placed under my skin is proof of our worth. With every throwdown, Déesse and her inner circle determine your crew’s rank. There are currently about fifteen registered crews in Mega City, each ranked in order. Unregistered crews are not worth a mention.

Doña Chela offers a toothless grin when the mandatory bell rings the rank of our crew. Only the top-five gangs gain VIP entrance to this particular club.

I’ve been to underground boydegas when Las Mal Criadas were just starting five years ago. The chulos were so ugly and dirty. There are Mega City residents who don’t approve of boydegas, which is hard to believe. Instead they cut loose with the Rumberos over by the water. A religious group, the Rumberos spend way too much time dwelling in the spiritual mumbo jumbo instead of reality. They are a small, forgettable bunch.

The Luna Club is legit. There’s good food, music, and potent drinks. There are sueño tabs too, if you are into that. My crew stays far away from sueños. We keep our minds clear of manufactured dreams. It’s a decree I made when I started the gang. I’ve seen firsthand how sueños can destroy a person.

I won’t stay long tonight, though, just long enough to return to my normal self, not shook because of a dumb charm.

“What other mocosos are here trying to uglify your home, Doña?” Truck asks as she checks in her weapon. Truck loves the club. Here, the chulos think Truck is the bomb. She plays drinking games with them or wrestles. She’s generous with the papis to the point one summer I cut her off for trading too much of her sueño supply. Sueños are our top currency. With every throwdown won, we get paid in tabs. Since Déesse provides us with food and we carve our own shelter, there is no need for old-school money. Still, we can’t spend tabs carelessly. That summer the battles were pretty dull, so Truck went kind of nuts with boredom. She handed out tabs as candy. It got so bad I had to block her from entering the club for a whole month. Nowadays I allow her a little bit of leeway. Not much.

My crew stays far away from sueños. We keep our minds clear of manufactured dreams.

“Nobody’s here, just a couple of my girls. Quiet. I think everyone is getting ready for this weekend.” Doña accepts my sueño tabs and chucks them into her purse. She calls gang members, no matter what affiliate, her girls. Doña doesn’t have any children of her own, although she gives a motherly vibe. I don’t have that type of relationship with her and I don’t let my soldiers be seen that way. We don’t need mothers. We only need each other.

“We’ve got a special tonight,” she says. “If you buy two, you get the third chulo at half price.”

There won’t be any sales on the day of the throwdown. In fact, she’ll make renting a papi twice as expensive. That’s when everyone will want papi action. I’m glad the club is empty. For the most part, boydegas are neutral territory. No one is supposed to fight. Of course, things get stirred up from time to time. How could they not when you have rival crew hanging in one spot? Not tonight. Everyone will save their aggression for the throwdown this weekend.

The booming bass from a popular song rattles the gilded mirrors lining the stairs leading down to the club. I catch my reflection and see the long, jagged scratch left by the last lost toiler. Kicking her felt justified. My black curls lay limp. I look tired and run-down, much older than sixteen.

Giant paper animals hang from the ceiling: massive tigers and lions, pandas, and kangaroos, each with a maniacal grin. When the place is jumping with people crushed side to side on the dance floor, Doña Chela usually invites the victors to bash the giant animals and shower the partygoers with candy laced with “happiness.” Unlike the synthetic sueños, the candy has a natural high consisting mostly of THC. On this subdued night the giant animals stay put. The massive piñatas turn their heads as if they are watching us.

Truck elbows me. A couple dances in the center of the club. I recognize the Deadly Venom colors, black and pink, on the drunken girl. The chulo she leans on tries his best to keep her steady.

“She’s by herself,” Truck says. I shake my head, signaling to Truck she’s not worth it. The couple continues to dance. I sit at our table a little away from the dance floor.

Doña Chela usually invites the victors to bash the giant animals and shower the partygoers with candy laced with “happiness.”

“What’s going on with you?” Truck says after taking a large gulp from her drink. “You’ve been with a sour expression. We need to get pumped for this weekend. It’s on!” She pats my back hard.

The throwdown this weekend is by far our most important one. We’ve sparred our way to this very moment, beating other crews and proving we’re the best. The Deadly Venoms is hopefully the last obstacle for us to overcome before we step to the Towers. The stakes are too high for us to mess up.

I want to live in the Towers. It’s what I’ve been dreaming most of my soldiering life. We’ve never been this close to having this dream realized. I sense — no, I can see — it becoming my reality. No one else sees it as clearly as I do. Truck is too busy thinking of what’s going on right now, beating so and so, drinking and fooling around with chulos. I’m thinking about our future, of my whole crew’s destiny. Battling gangs for a measly crumb is dead. Once we’re set up in the Towers, we can watch other crews bash each other’s heads. Truck is wrong in thinking this weekend’s throwdown with the Deadly Venoms is just another fight. We are not only avenging Manos Dura’s death, but we are proving once and for all we’re worthy enough to live in the Towers.

“We can’t just beat the Deadly Venoms. We’ve got to put them on display,” I remind her.

Truck settles back down into her seat. She places her hand on my shoulder, a rare gesture that would embarrass others. Truck is fearless that way, not afraid to show a bit of vulnerability.

“Don’t worry. I’m here. We’ll get to the Towers,” she says. “No one else comes close. They’re even proclaiming our name.”

I look at Truck. There is never any doubt, only confidence. I wish I were like her.

Truck gestures over to a chulo to bring us more drinks. If Truck is nervous she’ll never tell.

Truck is fearless that way, not afraid to show a bit of vulnerability.

“What are you tired cows doing here?” The drunken Deadly Venom pulled away from her chulo and now points at our table. The drink is giving her courage.

“No. I want to talk to them,” she slurs. “Las Mal Criadas are a bunch of played-out girls who can’t fight. Just wait until you see what we are going to do to you.”

This Deadly Venom is barely twelve. There are no scars or marks on her. She must be a new soldier, as green as Nena. I want to warn her, to tell her no matter how many soldiers she knocks out, there will be another one waiting to strike her down. I want to tell her she’s young enough to bail. This life is definitely not for everyone. The sueño factories aren’t that bad. There’s time to carve a decent if boring life as a toiler. Instead, I keep quiet.

The Deadly Venom lunges toward us. She bumps into our table and tips over our drinks. Truck looks at me. To let this soldier go would mean to show weakness. It doesn’t matter how green she is or if she acts alone. I must play the part.

I get up and shove the Deadly Venom hard. Before the young girl has a chance to figure out her next move, I straddle her and throw a flurry of punches to her side, then toward her chest and ears. The girl tries to protect her face. I stop when her blood covers my knuckles.

“Go home or I’ll end the night with you,” I say. “Tell your leader we are ready for this weekend.”

The papi chulo helps the Deadly Venom up. He muffles her cries with his hand. The giant piñatas grin their paper smiles at me.

“That’s what I’m talking about.” Truck laughs. I do not join her.

Dealing in Dreams by Lilliam Rivera is out now.