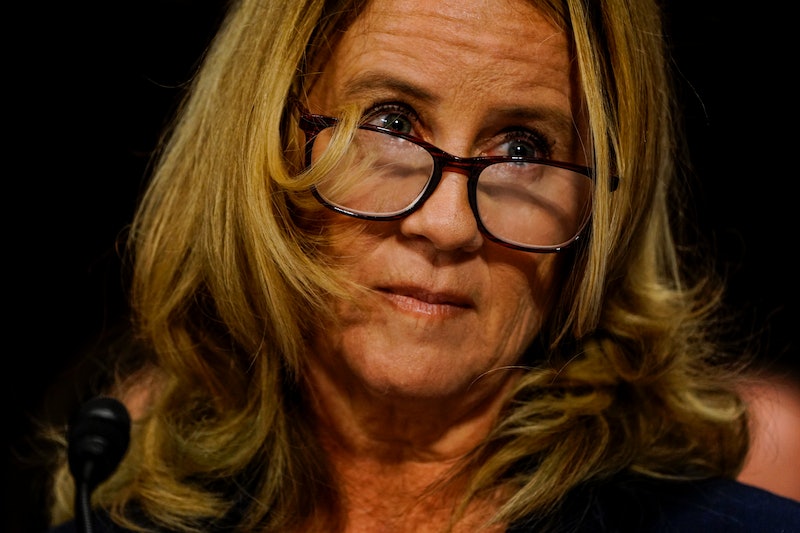 Watching Christine Blasey Ford's testimony in front of the Senate Judiciary Committee, many women — particularly, but not only, survivors of sexual assault or attempted sexual assault — probably feel as though they're going through the questioning right along with her. One woman, though, really does know something about the position that Ford is in — and she offered Ford her support directly. Another woman who has come forward with claims against Brett Kavanaugh, Deborah Ramirez, wrote Christine Blasey Ford a message through her lawyer on Twitter, and it's all about solidarity.

Supreme Court nominee Kavanaugh has denied all of the allegations against him, according to CNN, including Ford's allegation of attempted sexual assault and Ramirez's allegation that he exposed himself to her at a party.

"From Debbie Ramirez," Ramirez's lawyer John Clune wrote on Twitter on Thursday. "'Thinking of you today, Christine. They want us to feel alone and isolated but I’m there wrapping my arms around you and I hope you feel the people of this nation wrapping their arms around all of us. Holding you up in spirit.'"

Both Ford and Ramirez have been subjected to harassment in the time since they came out with their public accusations against Kavanaugh. Ford and her family had to leave their home and go into hiding because of the death threats that she received, the Guardian reported.

Ramirez, too, has been the victim of that kind of harassment, the Denver Post reported. Both she and Safehouse Progressive Alliance for Nonviolence, a domestic-violence support organization she works with, have reportedly received numerous harassing, hateful messages and threats.

Ramirez's lawyer had initially said that she would be willing to testify in front of the Senate committee, the New York Post reported, but then on Thursday, Clune said he did not believe the committee was handling the whole process in such a way that made it make sense for his client to testify.

According to New Yorker reporter Ronan Farrow, the Senate Judiciary Committee hasn't even been willing to speak to Clune, much less invite Ramirez to testify.

“She ... repeatedly has asked the Committee to speak with her about a process by which she can be heard by Committee members," Clune wrote in a letter, according to Farrow. "But the majority staff thus far has refused even to speak with Ms. Ramirez’s counsel.”

In lieu of actually testifying along with Ford, though, Ramirez has made it clear that she's standing right up there alongside Ford in spirit, along with so many other people doing the same on social media.

"Christine Blasey Ford is a hero," the Women's March wrote on Twitter. "She is shouldering such a huge burden. We wish we could shoulder it for her."