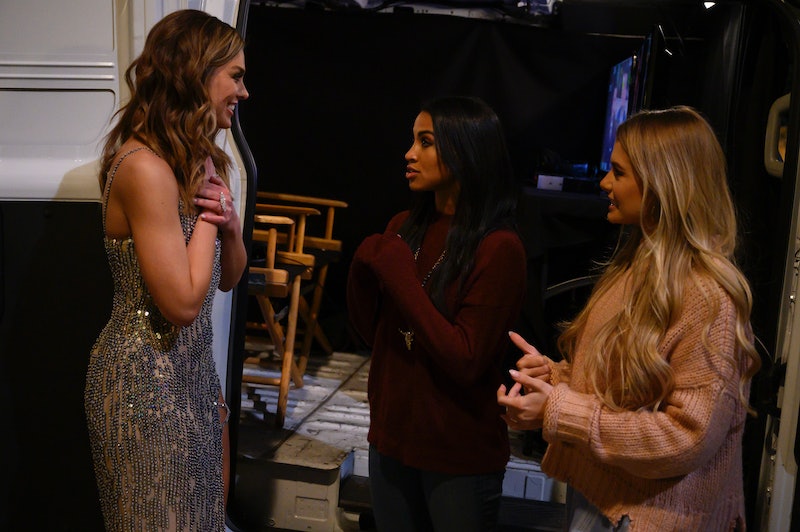 The first night of The Bachelorette doesn't feature the same difficult choices as the show's later episodes, when people are saying goodbye to people they've formed genuine connections with, but the act of trying to find your soulmate in the Bachelor mansion can still be incredibly awkward. Luckily for Hannah, the Bachelorette surveillance van is making its debut this season as a new tool to help the Bachelorette focus her attentions.As if the ability to play Big Brother on The Bachelorette wasn't already a huge advantage, Hannah will also be assisted by two trusted advisors who will be vetting the men for her — former Bachelor co-contestants from Colton's season, Katie Morton and Demi Burnett.

"We were listening in to all the conversations with Hannah and the guys, and all the convos between the guys," Demi told Entertainment Tonight, "We were just trying to make sure everyone was there for her." As fans know, there is no greater threat to a Bachelor or Bachelorette than someone who is not there for the right reasons, so having Demi and Katie on site to snipe out the troublesome contestants and the guys who might be more concerned with getting camera time than getting close to Hannah is a major advantage. It will save Hannah some time, and probably also lead to some juicy drama for fans at home.

While there's little doubt that Hannah would be able to suss out the good from the bad over during her time on the Bachelorette on her own, she may find that her two friends know her in ways that she may not know herself. Or at least be able to predict what will happen if she meets a guy that isn't quite on her level. "We're maybe a little bit mean, but it's funny," Demi said of her and Katie's van presence in that same ET interview. "Maybe a little critical, but it's because we're protective of her. Any guy with a weak personality, I was like, 'She's going to eat him alive.'" Demi added that Hannah also needs someone who is "religious" and isn't "scared of anything."

To be honest, who wouldn't want Demi and Katie to have their backs?

While the inclusion of the van seems like a set-up for some lighthearted jokes, the season preview suggests that Demi — who at one point is seen calling out, "that's the guy, that's the guy!" from the van — is able to track down someone who may be hiding something major. Being able to just get right into the confrontations is a good thing on this show.

While the surveillance van is a brand new inclusion to the series, its impact on Hannah's first night could push the show's producers to bring the van back for future seasons and help pick off people who aren't there for Hannah. If nothing else, it allowed Demi and Katie to scope out some possible future visitors to Bachelor In Paradise that they might want to run into this summer on the beach.