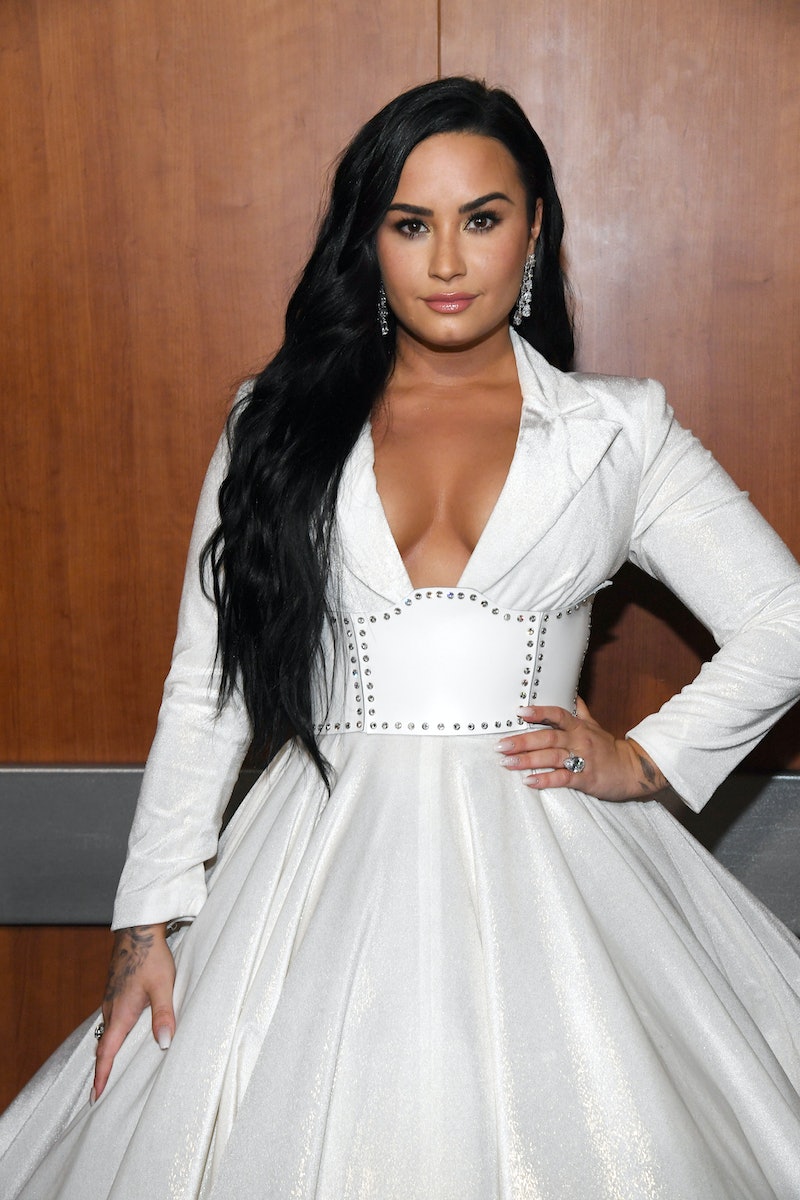 In line with her propensity for candor, Demi Lovato described coming out to her parents on the Thursday, Jan. 30 episode of Andy Cohen's SiriusXM show Radio Andy. Cohen had asked the singer about a recent Beats 1's interview with Zane Lowe in which she revealed she's unsure if she'll start a family with a man or a woman in the future. In response to the Bravo exec's question, Lovato described the "emotional, but really beautiful" 2017 conversation with her mom and stepdad, Dianna and Eddie De La Garza. (Her biological father Patrick Lovato died in 2013.)

"After everything was done, I was like shaking and crying, and I just felt overwhelmed," Lovato recalled to Cohen. She added that her "incredible parents . . . were so supportive," and her father even had a somewhat comedic response. "My dad was like, 'yeah, obviously,'" she joked, adding that he referenced her 2015 song, "Cool for the Summer." (The track's lyrics seemed to reference a secret, experimental summer fling with another female.)

Her mom was the one she told Cohen whom she "was super nervous" to come out to, however. "But she was just like 'I just want you to be happy," added Lovato. "And that was so beautiful and amazing, and I'm, like I said, so grateful."

Although Lovato tends to reject labels on her sexuality, she described herself as sexually fluid during an interview for InStyle's April 2018 cover story. Explaining that she's "very fluid" and believes "love is love," the Grammy-nominated artist elaborated: "You can find it in any gender. I like the freedom of being able to flirt with whoever I want."

When it came to the topic of wanting to start a family, Lovato told Cohen that whether she has kids "this year or in 10 years," she's "still figuring it out" and doesn't know what her future looks like. In fact, she said she's even open to having a baby all on her own, adding, "Women, we don't need partners."

Recently, Lovato had casually dated Mike Johnson from The Bachelorette briefly last fall, but the fling seemed to fizzle around Oct. 2019. Then, Lovato went public about dating model Austin Wilson in a since-deleted Nov. 2019 Instagram post, but People confirmed on Dec. 21 that they'd split. "She's concentrating on herself and her work right now, as well as focusing on her relationship with God," a source explained to the magazine at the time. "She's excited for what this next chapter in 2020 will bring."

Since then, Lovato has already made an emotional comeback performing her new single "Anyone" at the 2020 Grammys, and she's also scheduled to sing the National Anthem at Super Bowl LIV in Miami on Feb. 2. And whether or not motherhood will soon follow or not, it seems that her parents will be supportive regardless of her partner's gender.

More like this
What Demi Lovato Really Thinks About Child Stardom, Depression, & Sobriety
By Radhika Menon
Demi Lovato Might Stop Touring Forever Due To Being "So F*cking Sick"
By Jake Viswanath
Pro Footballer Zander Murray Is "Blown Away" By Support After Coming Out
By Sam Ramsden
Jinkx Monsoon Is About To Get Real Sketchy
By Sam Ramsden
Get Even More From Bustle — Sign Up For The Newsletter