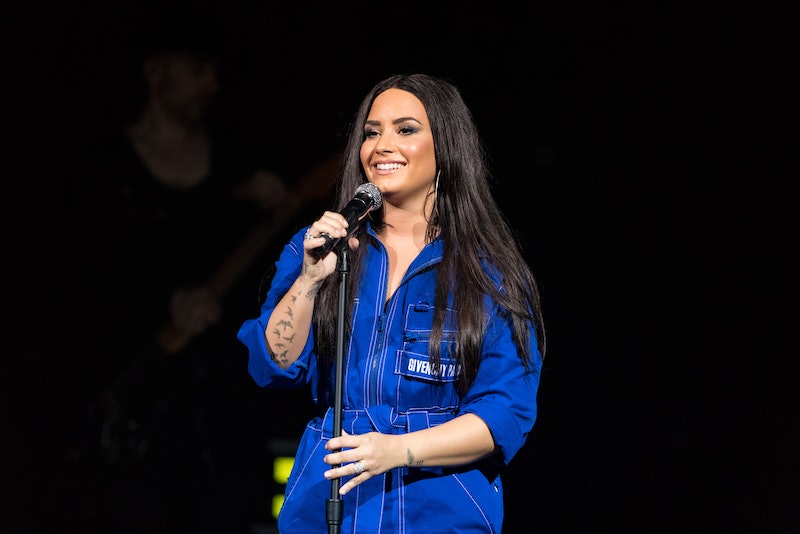 Hard times can often show you who your true friends really are, and it's been a pretty rough year for one famous pop star in particular. Luckily, it seems like she's had a super solid support system. In a touching Instagram post on May 14, Demi Lovato thanked her best friends who stood by her when others didn't, as pointed out by Billboard.

In July 2018, TMZ reported that Lovato was rushed to the hospital due to an apparent overdose. The singer seemingly confirmed the news herself several weeks later, in a post on Instagram that has since been deleted. "I have always been transparent about my journey with addiction," the statement began. "What I've learned is that this illness is not something that disappears or fades with time. It is something I must continue to overcome and have not done yet."

She then went on to thank God "for keeping me alive and well," her fans for their "love and support," her family, her team, and "the staff at Cedars-Sinai who have been by my side this entire time." Now, though, Lovato is voicing her gratitude for two more people, both of whom she suggested have been crucial to her recovery.

In the caption of a photo that shows Lovato alongside her friends Matthew Scott Montgomery and rapper Sirah, she wrote,

"Thank you for never leaving me in my darkest moments, for always drying my tears.. even when they’re from watching Moana.. thank you for being loyal, honest and so grateful for every little thing.. like crying because we swam with fish/sharks/stingray and coral reef. I’m so lucky to be best friends with two incredible souls who are so talented and creative because it inspires me daily."

Lovato then recounted some of the ways that Montgomery and Sirah have shown their support for her during tough times. "You've traveled across the country to visit me and stayed with me at my house for days on end when I’m struggling to make sure I’m okay but most importantly you never abandoned me like others did when I was going through sh*t," the star wrote. "[You] were there to listen, without judgement and only love and I can never fully express what that means to me."

Um, does anyone have a box of tissues nearby? Toilet paper, perhaps? Some paper towels? An unused napkin? Anything to sop up all these tears that won't stop flowing now. Seriously, though — what an incredibly touching tribute to her friends.

Lovato closed out her post by adding, "You’re the greatest friends I’ve EVER had and our future together is so bright. I love you both more than you can imagine!!" Anyone else feel like calling their BFF right now? Maybe try to stop crying first, though. Don't want to like, completely freak them out.

Lovato celebrated six months of sobriety in January of this year, and it seems like her friends have played a big part in helping her reach that milestone. She looks super happy and healthy these days, and is lucky to have them by her side.