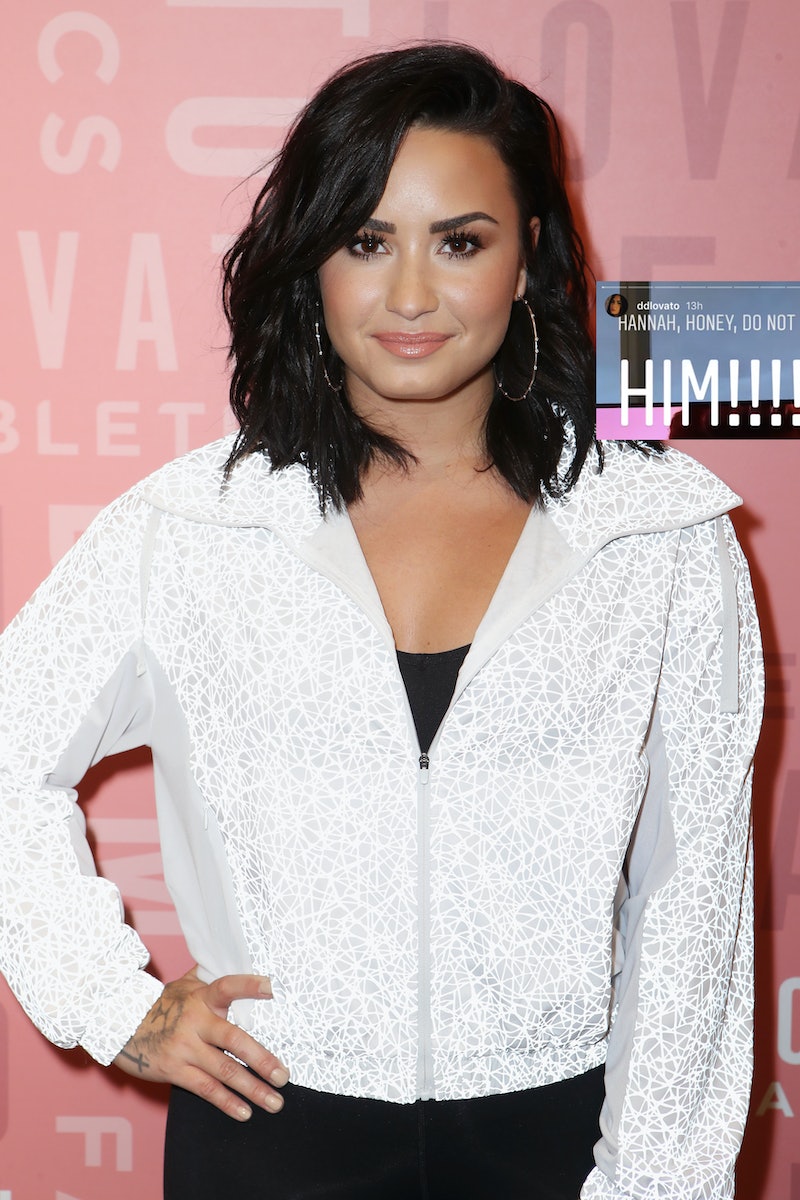 There are a lot of celebrities who are avid fans of The Bachelor and The Bachelorette, but Demi Lovato isn't in that bunch — or at least she wasn't. She actually just watched the show for the first time ever and she already has some strong opinions. Lovato does not trust Bachelorette contestant Luke P., and she couldn't help "warning" Hannah Brown on her Instagram Story, as pointed out by Us Weekly.

On Tuesday, May 21, Demi watched the show with her mom Dianna de la Garza by her side. The singer shared all of her reactions with her Instagram followers. Even as a first-time viewer, she couldn't help being emotionally invested. Why was she so outraged? Luke P.'s premature love confession for starters. On the last episode, Luke caused some major waves and it was only the first date of the season. Oh, and it was a group date at that.

He told Hannah that he was "genuinely falling in love with her" during the "talent" portion of the pageant competition. Since when is telling women (what he perceives) they want to hear considered a talent? Apparently, he does know what he's doing though, since Hannah said that she did "believe" his words. However, Lovato was not picking up what Luke was laying down.

When Luke came on the screen, Lovato wrote on Instagram, "Hannah, honey, do not trust him!!!!!!"

She couldn't help sharing her shock when Luke continued to spill his feelings during a one-on-one talk with Hannah during the nighttime portion of the group date. Yes, girl, even the seasoned viewers' minds are exploding. A first date is just way too soon to declare love for someone, even in the accelerated environment of The Bachelorette.

Lovato managed to find some positives during the episode. She even has her own favorite contender. She revealed that Mike is her pick to win the final rose at the end. Us Weekly shared that Lovato remarked, "he should win" when Mike came on screen.

And Mike isn't the only one Lovato is feeling. She's a big fan of the Bachelorette herself. She declared that she is "sooo cute!!"

During the second group date, the guys participated in roller derby, which looked like a fun activity to Lovato. She wrote that she wants to "do this so bad."

Maybe Lovato will get hooked on watching the show and make an appearance on a group date next season. She wouldn't be the first celebrity fan to do so. Mila Kunis and Ashton Kutcher ran a group date on Rachel Lindsay's season of The Bachelorette in 2017. Amy Schumer helped the guys with their standup routines on Kaitlyn Bristowe's season in 2015. Will Lovato show up for The Bachelorette in 2020? You never know.

By the way, Lovato watched up until the very end of the episode. When Luke barged in while Hannah was recording an interview post-rose ceremony, Lovato declared, "I'm uncomfortable." She also wrote that she was "crinnnggging" with a lot of additional letters, making her point very clear.

If only Lovato was on hand to offer advice during filming. Luke P. needs to go, but it doesn't seem like that's going to happen at anytime soon. Will Demi Lovato stay with the show though? Let's hope that she continues to watch and share her reactions on Instagram.