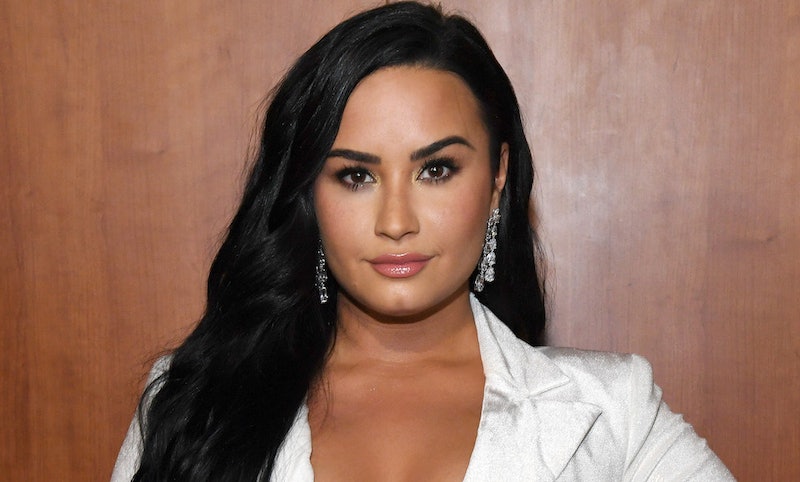 During an interview on Ashley Graham’s podcast Pretty Big Deal on Tuesday, Demi Lovato said her approach to body positivity centers on acceptance rather than love. In a discussion that touched on sobriety and overcoming an eating disorder, the "Anyone" singer revealed how her dietician altered her perception of her body with a mantra that prioritizes acceptance above all else.

“Now when I look in the mirror and I start to have a negative thought, I don't stop and say, 'No, you're beautiful. You're gorgeous. I love you. You're perfect the way you are,’” she told Graham. “Because I don't believe that." Instead, Lovato has learned to say, “You’re healthy and I accept you.” She explained, “So you express gratitude in the health, and then you just express reality in accepting yourself rather than trying to convince yourself of something that you don't believe.”

She added, “I would love to be in a place where I can say I'm super confident in my body, but the reality is, I'm not." With this new approach, Lovato said she now has no idea how much she currently weighs — and the unawareness has been a source of freedom. She said, "I finally feel like I have freedom from it because I literally don't know my weight; and it's the most free that I've ever felt in my whole life."

Lovato also discussed her decision to share her viral unedited Instagram bikini photo in September 2019. “I was in the studio and I was working with one of my favorite producers. We were writing and we were making this song, it was like an anthem about body positivity,” she told Graham. “When I go into the next chapter of my career, what do I want it to be? Because I’ve always done the sexy route. I’ve never really done the whole feeling comfortable with yourself.”

The singer has been a longtime advocate of body positivity. In her first interview in over a year since her 2018 overdose, Lovato appeared at the Teen Vogue Summit in November 2019 and reflected on how she’s learned to embrace her body. "I've been through a lot and I genuinely see a fighter," she said. “I don't see a championship winner, but I see a fighter and someone who is going to continue to fight no matter what is thrown their way… That's what I see when I look in the mirror — a strong woman."

More like this
'The Bachelor's Peter Weber & Kelley Flanagan Are Reportedly Back Together
By Grace Wehniainen
Gisele Bündchen Appears To Address Those Tom Brady Divorce Rumors
By Radhika Menon
Why Constance Wu Calls Her Apology To This 'Fresh Off The Boat' Star Unforgettable
By Marina Watts
Everything To Know About Taylor Swift’s 10th Studio Album, 'Midnights'
By Grace Wehniainen and Jake Viswanath
Get Even More From Bustle — Sign Up For The Newsletter