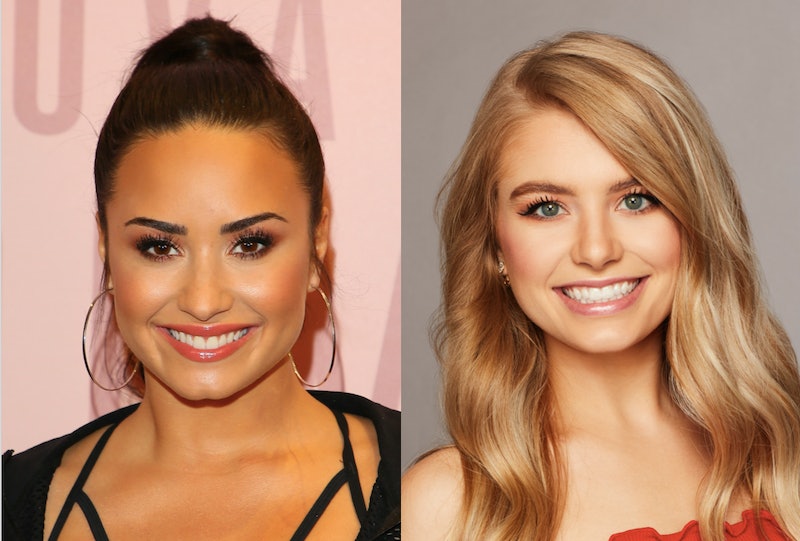 Welcome to Bachelor Nation, Demi Lovato. The singer recently watched The Bachelorette for the first time ever and had a lot of opinions about the guys. Apparently, Lovato is officially a true fan now, since she started following Hannah Brown on Instagram. Not only that, but Lovato watched The Bachelorette again on Monday, May 27, and her commentary included a shoutout to the other Demi — Demi Burnett from Colton Underwood's season of The Bachelor. Ironically, Burnett's Instagram handle is @demi_not_lovato.

Maybe Lovato will go back and marathon Colton's season of The Bachelor to see Burnett in her shining glory? Or, perhaps, she'll just move forward with the Bachelor franchise and tune into Bachelor in Paradise when it starts up this summer. Especially since Burnett is very likely to be a part of BiP, which seems like her true element in all honesty.

Last week, Lovato shared her reactions to The Bachelorette episode on her Instagram Story. She was very adamant about her distaste for Luke P. and she even warned Hannah against moving forward with him. Unfortunately, it's a pretaped show and Hannah could not incorporate the "Sorry Not Sorry" singer's advice during filming.

Still, Hannah did notice Demi's episode commentary, of course. She even tweeted about it, because who wouldn't tweet about that?

This week, Lovato was done with Cam and his constant acronyms. He did not receive a pity rose from the pop star or from Hannah.

However, Lovato did have some positive things to say this time around. She gave a shoutout to her name twin during her cameo on the episode.

Last week, Burnett tweeted about Lovato's Bachelorette-inspired posts and now she's a part of them. What a cool moment.

As far as the suitors this season go, Lovato has one standout guy: Mike Johnson. Both last week and this week she posted about Mike. When Hannah gave him the group date rose, Demi exclaimed, "Yes, boo boo!" in support of the Bachelorette contestant. She even threw in "Suck it, Cam." Ouch, but very much warranted.

Surprisingly she did not make any remarks about Cam rocking a sweatshirt, sportcoat, and pocket square all at the same time. However, she did comment, "He's just gonna stare at him like a psycho," and she called Cam a "weirdo."

In another post, Lovato put a big, red "X" over Cam, which shows she has very good instincts about this show even though she's new to watching. Hannah did end up sending Cam home after confronting him for telling her an emotional story to get a last-minute rose.

Clearly, Lovato is a fan of the show now. This is the second week in a row that she has tuned in to The Bachelorette after admitting that she had never seen any show in the franchise before that point. Does this mean that she will watch next week's episode too? More importantly, will she share her reactions with the world via Instagram Story?

And looking way ahead, is it too soon to wonder if she will make a guest appearance at some point in the future? A group date with Demi Lovato sounds like a great idea.