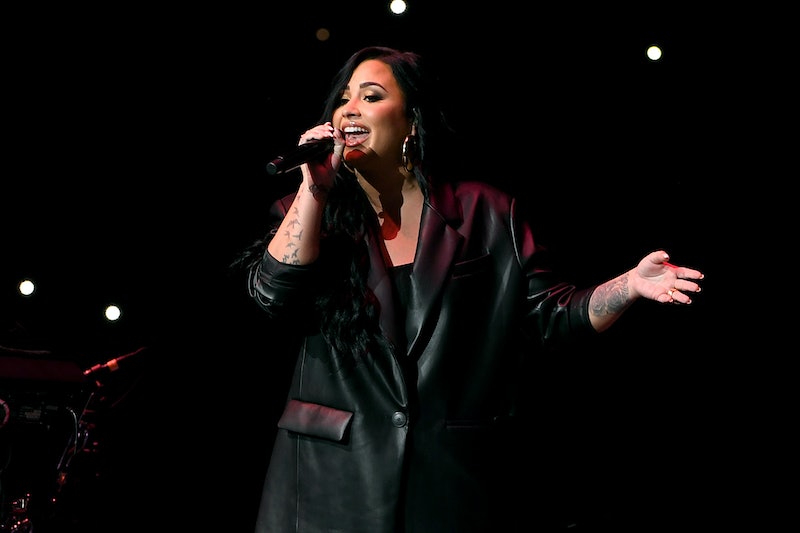 While in Miami to perform the National Anthem at Super Bowl LIV, Demi Lovato sang "Speechless" at a pre-Super Bowl performance on Saturday, and the singer's vocals impressed the crowd, according to Billboard. During a performance at the Bud Light Super Bowl Fest, Dan + Shay brought Lovato on stage for a special rendition of their Grammy-award winning track.

Manager Scooter Braun, who represents both Lovato and Dan + Shay, made the performance happen after he brought the pop star backstage to meet and greet the duo. On Instagram, Braun captured all three musicians practicing their rendition of "Speechless" on video, captioning the post, "Moments when my job allows me to see moments that are just amazing." He added that Lovato was a fan of Dan + Shay, and that the musicians were initially just "talking music." However, the mutual appreciation between the artists resulted in the beautiful jam-session and ultimately led to "an amazing surprise on stage." Of the performance, Braun added: "Wow."

During Dan + Shay's concert, Lovato left her seat in the VIP section, where she was seated with her parents, and hopped on stage, joining the duo for the track, as per Billboard. Fans captured video of the impromptu performance, and in the background the crowd can be heard cheering loudly. On her Instagram Story, Lovato provided live updates from the concert, writing, "Dan + Shay with Mom & Dad." She also included a video of the duo performing, writing, "F*cking love these guys." Later, she reposted Braun's video on her Instagram Story as well, writing, "I love Dan + Shay so much."

On Twitter, fans reacted to the "Anyone" singer's surprise performance, with one fan writing the artists should record the new version of the song, writing "Um excuse me @DanandShay we are going to need a Demi Lovato version of Speechless now please and thank you," and another fan requested a recording as well, tweeting, "So I know Dan + Shay re-released Speechless with Tori Kelly but after watching them perform the song with Demi Lovato. I want that version as well!"

Lovato's surprise cover of "Speechless" won't be her only major performance this weekend. On Sunday, Lovato will sing the National Anthem at Super Bowl LIV, before the San Francisco 49ers take on the Kansas City Chiefs. Later, Jennifer Lopez and Shakira will perform a star-filled halftime show with J. Balvin, Bad Bunny, and more, according to Billboard. It will be the first time J.Lo and Shakira have performed on stage together, and the singers promised the performance would be "energetic" during a pregame press conference, as per CBS.

Between the "Sorry Not Sorry" singer's National Anthem performance, and J.Lo and Shakira's take on the Super Bowl half time show, it's going to be a major night. Lovato's cameo during Dan + Shay's show was just the perfect way for fans to kick off the weekend.

More like this
What Demi Lovato Really Thinks About Child Stardom, Depression, & Sobriety
By Radhika Menon
Twitter Is Freaking Out Over Rihanna’s 2023 Super Bowl Halftime Show Announcement
By Stephanie Topacio Long
Everything To Know About Taylor Swift’s 10th Studio Album, 'Midnights'
By Grace Wehniainen and Jake Viswanath
How Ghosts Inspired Kesha’s New Music
By Jake Viswanath
Get Even More From Bustle — Sign Up For The Newsletter