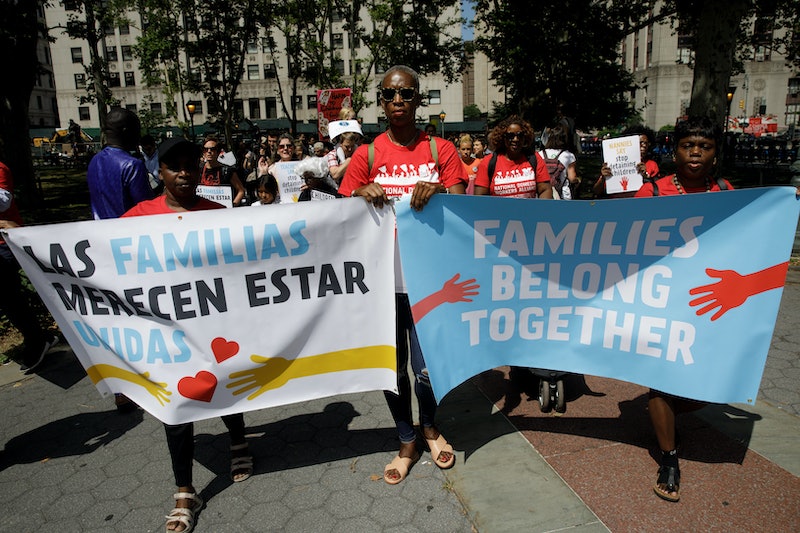 Nearly 30 pregnant women detained by Immigrations and Customs Enforcement (ICE) miscarried in 2017 and 2018, and a Honduran woman delivered a stillborn boy at a Texas immigration detention center in February. In response, NBC News reports that Senate Democrats have asked ICE to free detained pregnant migrants on presumptive release like the agency used to.

ICE introduced the policy to detain pregnant women following an executive order from President Donald Trump in January 2017. Before that, pregnant migrants would be released automatically with orders to appear before an immigration judge at a later date. Some 16 senators say the new detention policy needs to be reversed.

"In the absence of compelling evidence that the detention of a pregnant woman is necessary because she is a threat to herself or others, or is a threat to public safety or national security, the civil detention of an expectant mother for potential immigration offenses is never justified," the letter to both ICE and Customs & Border Protection (CBP) reads.

The senators went on to say that they have received reports of "pregnant women having been denied access to medical care or receiving inadequate medical care while in ICE detention." The senators also write that some women have said they were mistreated by ICE and CBP officers, both physically and psychologically, and were "shackled around the stomach" while being transported. Bustle has reached out to CBP for comment; ICE declined to comment on the senators' letter.

"Stories of pregnant women being mistreated or having their medical needs neglected while in [Department of Homeland Security] custody are unconscionable," Nevada Sen. Catherine Cortez Masto, who was the lead signature on the letter, said in a statement provided to NBC News. "These women need a safe environment and regular access to medical care, which ICE and CBP have failed to provide."

Via email, ICE provided Bustle with a general statement on medical care.

"ICE takes very seriously the health, safety and welfare of those in our care, the statement reads. "ICE is committed to ensuring the welfare of all those in the agency’s custody, including providing access to necessary and appropriate medical care. Comprehensive medical care is provided to all individuals in ICE custody." The statement also included information on what medical providers ICE contracts, and the total cost of $269 million a year.

An online FAQ says ICE doesn't generally detain women in their third term, though it says all detention is consistent with the law. ICE also wrote that "facilities will continue to provide onsite prenatal care and education, as well as remote access to specialists for pregnant women who remain in custody."

As for the Democrats' letter, Masto was joined by 15 others, including many 2020 candidates for the Democratic presidential nomination. Sens. Cory Booker, Kirsten Gillibrand, Kamala Harris, Amy Klobuchar, Bernie Sanders, and Elizabeth Warren all co-signed the letter.

The letter included a list of questions to ICE and CBP that the senators want answered by April 26. Among the questions are inquiries on the number of OB/GYNs available at different facilities, how many pregnant women are currently being held, and the procedures surrounding miscarriages.

"We cannot stand by while women are harmed by this administration’s inhumane policies," the letter reads. "We strongly urge ICE to reverse its decision and reinstate a policy of presumptive release for all pregnant women, and CBP to institute strong measures that ensure the timely and appropriate treatment of pregnant women in its custody."