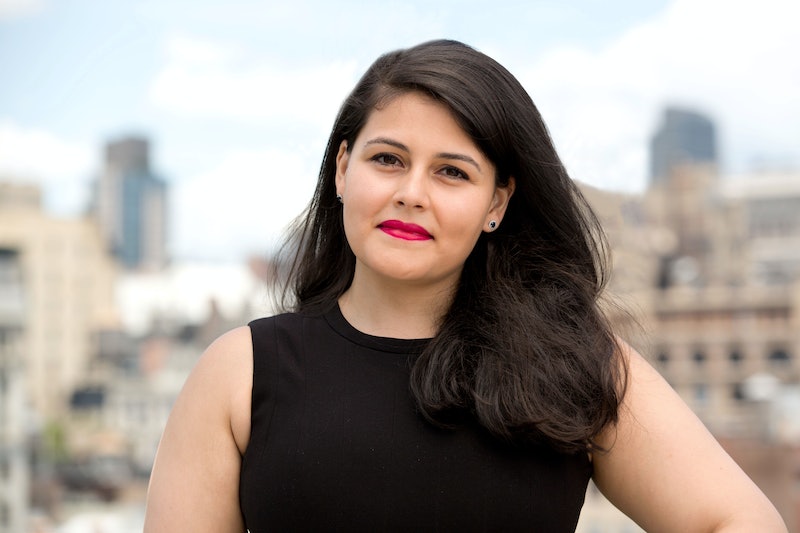 There was a poster at the entrance of NYFW that said "You're not fat, you're beautiful," which implied that you can only be one or the other — not both. It was a perfect example of how brands mess up the body positive conversation they're trying to be a part of. Body positivity, which I think is probably what that poster was trying to do, is something that's really only for individuals. It's about taking control of yourself and saying "I'm going to feel this way about my body regardless of what the world tells me."

At Dia & Co, when we think about the role brands should play in the body positivity conversation, it's really much more about figuring out how this system can change. Brand leaders need to recognize weight bias and the other ways they've participated in making women feel the way we do about our bodies. What have we, as brands and an industry, done to make it so that women have to have radical boldness and courage to feel comfortable in their own bodies? Most of it comes from weight bias. So, we have to approach serving the plus-size customer in particular from a place of care and dedication. It's not fair for brands to say, "Actually, ignore the message we've been telling you for so long. Now, you need to feel good about yourself." That puts the onus back on the women to instantly unlearn things they've been hearing from brands for years.

Our job as a brand is just to amplify those personal stories, not to try to write our own story as a voice of body positivity.

I'm of two minds about the current state of inclusivity in fashion. At Dia & Co, we firmly believe that we should celebrate all moments of progress and it sometimes feels as though the industry has come so far, but when you actually stop and take inventory of where we are, you realize the journey toward true inclusivity is only just beginning. Take New York Fashion Week, for example. The preliminary numbers about model size diversity for SS2020 Fashion Week are really disappointing. [Ed Note: The Fashion Spot's official diversity report ultimately said that 68 plus-size models were cast this season, making up 3% of the total models cast.]

Even though that flabbergastingly low number is up from past seasons, it's the same designers casting diverse shows. It's Chromat; it's Christian Siriano; it's Fenty. The vast majority of non-sample-size models walk in those shows. I hope that those brands get the recognition that they deserve for really leading the charge. But what is going on with everyone else?

We need to advocate for educators who have the expertise and the appreciation for designing for all body types.

As brands, we can begin to counteract decades and decades of negative visual representation of larger bodies in the media, fashion, in movies — you name it — by showcasing beautiful women coming down the runway who just happened to have larger bodies. I remember the first time that I saw a plus size model for Nordstrom on Instagram. My jaw hit the ground. I've been plus all my life and I'd never seen anyone that looks like me be successful or be a style icon, or be an icon really in any way. That sort of representation can change people's lives.

Brands can also become a platform to let people who have been the leaders in body positivity share their own stories. Dia & Co's Fashion Forward campaign featured a group of women across a variety of fields that found the courage to live their life more boldly than how people thought that they should in their body. We featured entrepreneurs and editors. We featured the first transgender plus size model to make a fashion campaign, and the woman who runs New Orleans film society. These people have done extraordinary things despite being told time and time again that their size would prevent them from being able to see their dreams out.

That campaign really started a conversation around what it means to live fully in larger bodies, along with how other people treat larger bodies, dress larger bodies, and serve larger bodies. Ultimately our job as a brand is just to amplify those personal stories, not to try to write our own story as a voice of body positivity. It's not about Dia's story on body positivity. It's about these iconic women across various industries who have had the radical courage to go out and live extraordinary lives despite the fact that their size was suppose to have been a limiting factor.

We have to approach serving the plus-size customer from a place of care and dedication.

Education is another huge root cause as to why quality clothes are not being made for all sizes. Yes, it's about educating current designers and team members of brands around what it means really design well in an inclusive way. But to really making long-lasting change — so we're not still having this conversation in 10 years — the industry needs to be investing in designers in the earliest stages of their careers. We need to advocate for educators who have the expertise and the appreciation for designing for all body types. In Dia & Co's case, we teamed up with the CFDA to, basically, be their official size inclusive partner.

Dia & Co created a capsule collection of T-shirts designed by people like Venus Williams, Christian Siriano, Tracy Reese, and Lizzo. All the proceeds from those tees went to a fund that was meant to create size-inclusive education at design schools across the country. That can help designers come into the industry with more of an awareness and appreciation and a skillset that lets them do inclusive designing right.

An excuse I often hear from other brands who don't make plus size or inclusive size ranges is that it's too much of an expensive investment. But what I hear when they say that is, "We're not sure this investment is worth it." Because anyone will make an expensive investment if they think there will be a worthwhile return. I've found that the brands that feel really strongly about inclusivity somehow find a way to spend that money.

Just like serving any customer, there are nuances and areas of expertise required to do inclusive sizing well. So, ultimately, the biggest obstacle for a brand is not having that genuine desire to make sure it's done correctly. But if, as an industry, we work on addressing those root causes, I have faith we'll eventually get it right.

As told to Kara McGrath. This interview has been edited and condensed for clarity.