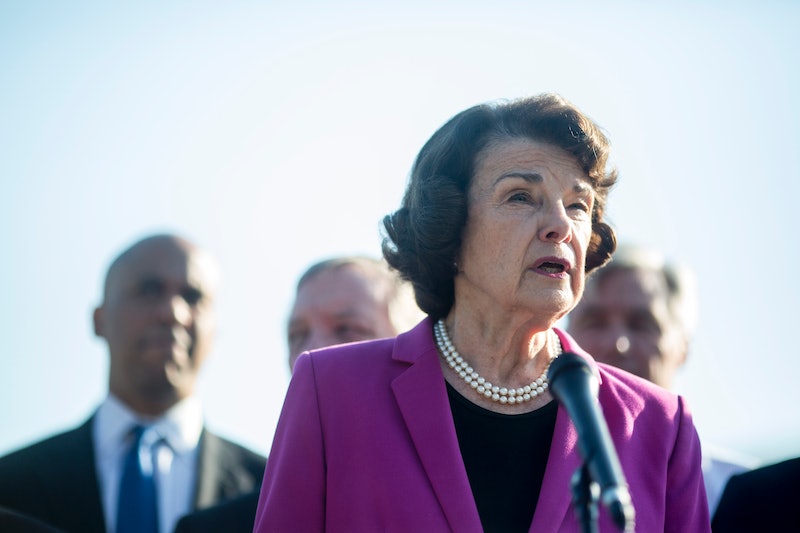 Dr. Christine Ford has accused Supreme Court nominee Brett Kavanaugh of sexually assaulting her when she was 15, throwing Kavanugh's Senate confirmation hearings into disarray. Kavanaugh denies the allegation, and Republican senators have vowed to move ahead with his nomination regardless. But in a statement Friday, Sen. Dianne Feinstein backed Ford and rebuked her GOP colleagues for trying to "rush her into a hearing" with Kavanaugh.

“Dr. Ford is receiving death threats," Feinstein said. "She’s had her identity stolen and her email account hacked. She fled her home [with her] family. But Republicans want to rush her into a hearing. It’s mean-spirited and candidly shows no sympathy or empathy whatsoever."

Ford's lawyers have been speaking with the Senate Judiciary Committee in an attempt to schedule a hearing for her in the Senate, but have so far struggled to reach an agreement on the conditions of such a hearing. According to various reports, one sticking point is the timing: Senate Republicans are demanding that Ford testify on Wednesday, but her lawyers say that the earliest she can do so is Thursday.

In her statement, Feinstein scolded her Republican colleagues for refusing to shift their schedule back by a day to accommodate Ford's schedule.

“It’s just an extra day, why not wait 24 hours?” she said. “Republicans should show a little compassion, not to mention consideration that she'll need to prepare for the hearing.”

Sen. Charles Grassley, chair of the Judiciary Committee, proposed a format for Ford's testimony on Friday. Under Grassley's plan, Ford would be questioned by outside counsel before Kavanaugh takes the stand; Ford's lawyers had wanted her to be questioned by Republican senators after Kavanaugh already testified, however.

Grassley had originally set a deadline of 5 p.m. Friday for Ford's lawyers to respond to that offer; when that deadline passed, he said in a statement that he's made "extensive efforts to make testimony possible" but nevertheless extended the deadline by several hours.

“I’m providing a notice of a vote to occur Monday in the event that Dr. Ford’s attorneys don’t respond or Dr. Ford decides not to testify,” Grassley said. “In the event that we can come to a reasonable resolution as I’ve been seeking all week, then I will postpone the committee vote to accommodate her testimony. We cannot continue to delay.”

Feinstein, however, noted that Senate Republicans had no problem delaying confirmation hearings when the nominee was picked by a Democratic president. Republicans refused to hold hearings for Merrick Garland, Barack Obama's last Supreme Court nominee, for 293 days — longer than any other nominee to the high court in U.S. history.

"I would remind my Republican colleagues that they blocked President Obama's nominee for a year and the court survived," Feinstein wrote. "Show some heart. Wait until Dr. Ford feels that she can come forward before the committee."

Republicans have sought to dismiss Ford's accusation through various means: By suggesting that it's absurd, by explicitly stating that it's "absurd," by accusing Ford of misremembering who allegedly assaulted her, by noting that the alleged incident took place a long time ago, and by claiming that Ford is acting as part of a centuries-old socialist plot to undermine America's values.

As of this writing, it's unclear when or if Ford will ultimately testify before the committee.