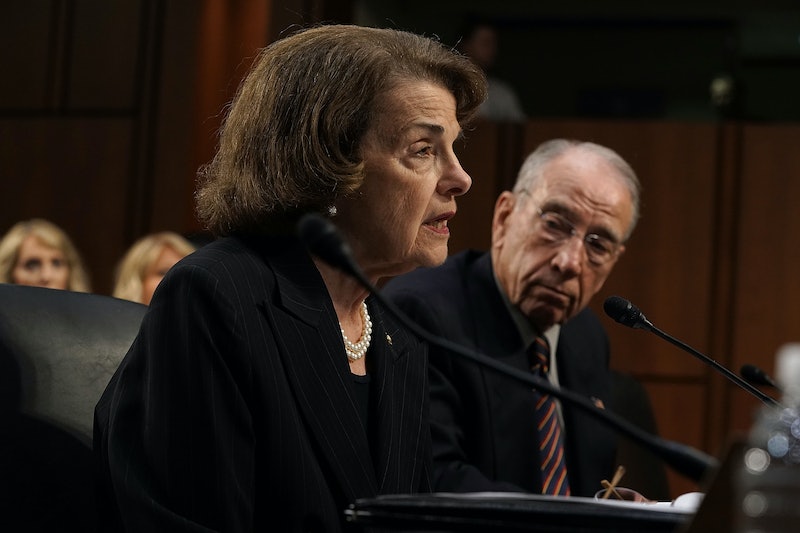 Just one week before the Senate Judiciary Committee is slated to vote on Brett Kavanaugh's nomination to the Supreme Court, a new document received by California Sen. Dianne Feinstein has generated significant speculation. The Intercept reported on Wednesday that Feinstein had received a document about Kavanaugh from California Rep. Anna Eshoo, but the contents of the document are unclear.

Feinstein, who is the Senate Judiciary Committee's top Democrat, has confirmed receiving it in a statement issued Thursday:

I have received information from an individual concerning the nomination of Brett Kavanaugh to the Supreme Court. That individual strongly requested confidentiality, declined to come forward or press the matter further, and I have honored that decision. I have, however, referred the matter to federal investigative authorities.

BuzzFeed News reported that Senate Democrats have since referred the document to the FBI, while The Daily Beast reported that Feinstein herself referred the document to the Department of Justice. An FBI spokesperson tells Bustle, “Upon receipt of the information on the night of September 12, we included it as part of Judge Kavanaugh’s background file, as per the standard process.“ Bustle has also reached out the DOJ for comment.

In response to a request for comment, a spokesperson for Feinstein directed Bustle to the statement the senator released on Thursday concerning the document, and indicated that she had no further comment on the subject.

According to The Intercept, different unnamed sources alleged that the document pertained to an incident involving Kavanaugh and a woman while they were in high school. This has not, however, been confirmed by Feinstein or Eshoo.

The New York Times, meanwhile, cited two unnamed officials as saying that the incident allegedly described in the document may have involved sexual misconduct. Kavanaugh has not yet commented on the document's existence. According to the Times, Feinstein received the document from Eshoo's office over the summer, and notified her fellow Democrats on the Senate Judiciary Committee of its existence on Wednesday.

The Times reported that several Senate Democrats urged Feinstein to take the document to the FBI. The Intercept, meanwhile reported that Feinstein refused to disclose the document to her colleagues on the committee despite their private requests, though it is unclear whether or not they are still unaware of its contents. However, the White House was quick to respond, condemning what it perceived as another attempt to delay Kavanaugh's nomination:

“Throughout his confirmation process, Judge Kavanaugh has had 65 meetings with senators — including with Senator Feinstein — sat through over 30 hours of testimony, addressed over 2,000 questions in a public setting and additional questions in a confidential session," White House spokeswoman Kerri Kupec said on Thursday. "Not until the eve of his confirmation has Senator Feinstein or anyone raised the specter of new ‘information’ about him. Senator Schumer promised to ‘oppose Judge Kavanaugh’s nomination with everything I have,’ and it appears he is delivering with this 11th hour attempt to delay his confirmation.”

Eshoo's office also told The Huffington Post that the document would not be made public because it was considered casework and had come from a constituent in her district. Nonetheless, the document has already stirred up significant speculation about its contents.

This document procured by Feinstein is not the first to cause controversy as Kavanaugh seeks confirmation to the Supreme Court. Earlier this month, the Trump administration announced that it was withholding approximately 100,000 documents concerning Kavanaugh's work for the George W. Bush administration, leading Democrats to condemn the confirmation hearings as premature.