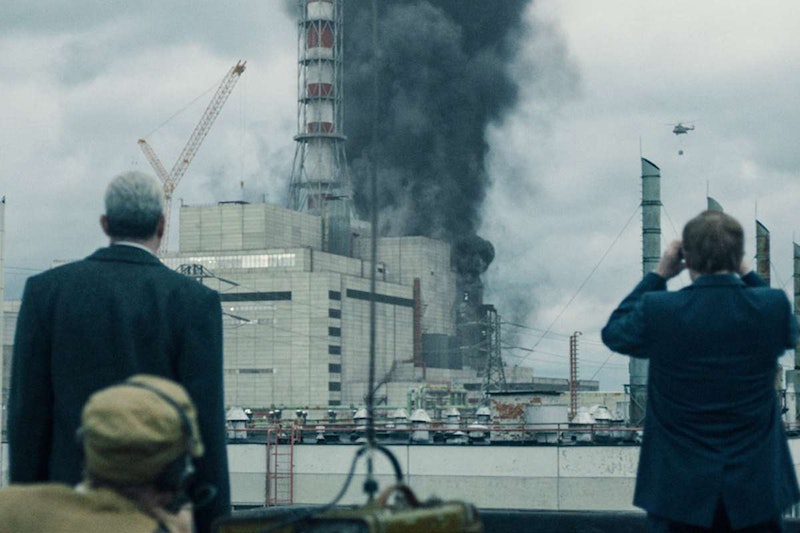 HBO is airing a five-part miniseries which aims to shed light on the horrors that unfolded on the day of the explosion of the nuclear reactor explosion at Chernobyl Power Plant, as well as the events leading up to it. Which means people are understandably casting their minds back to the 1986 disaster. There's also quite a lot of questions left unanswered, that the series doesn't necessarily cover. One that's on my mind is: did anyone go to prison for Chernobyl? Since the series hones in on some of the irresponsibility which led to the catastrophe, I want to know what kind of justice was served for the many people who lost their lives because of it.

The New York Times covered the events that unfolded on Jul. 30, 1987, just over a year after the Chernobyl disaster, as Chernobyl Officials were reportedly sentenced to time in a labour camp. Since Chernobyl arguably still stands as one of the worst nuclear power accidents in history, some people didn't feel the sentencing was harsh enough when the head of the Chernobyl nuclear power station at the time, alongside his two aides, were given 10 years at a labour camp. "After a three-week trial, most of it closed, three other officials received shorter labor camp terms," the paper reported at the time.

According to Russian site Accidont, of those sentenced, the chief director of the plant V.P. Bryukhanov, and the chief engineer N.M. Fomin got the maximum amount of time, as they were made to serve 10 years at a regiment prison, while others involved received varying sentences, anywhere from 10 to two years in length.

But, as mentioned, there are those who feel that the punishment didn't match the crime. This is the stance that Ukrainian politician and activist Alla Yaroshinskaya takes in her book Chernobyl: Crime Without Punishment, which contains secret documents on Chernobyl from the Communist Party Central Committee, according to The Moscow Times. If you're interested in learning more about Chernobyl following HBO's miniseries, Yaroshinskaya's book is where I'd start.

HBO's series, which premieres on Sky Atlantic (Sky Channel 104) at 2 a.m. on Tues, May 7, takes a similar stand to Yaroshinskaya's, since, as The Daily Beast wrote ahead of the show's premiere, it exposes the "horrifying scope of Soviet deception." So while the series should open your eyes to the true level of terror that Chernobyl's victims endured, it'll focus above all on the question: how did this happen? There may be a conspiracy lurking there after all, the series seems to suggest.

So, no matter how far you've looked into Chernobyl, this is a must watch for anyone. The series has already scooped up incredible reviews from some of the most prestigious publications, including the Atlantic who called it "a thorough historical analysis," of the disaster, as well as a "gruesome, riveting fable," in their review. There's no doubt that the series will provoke conversation on Chernobyl, and the threat of nuclear power in general, and it's a TV event you won't want to miss out on.