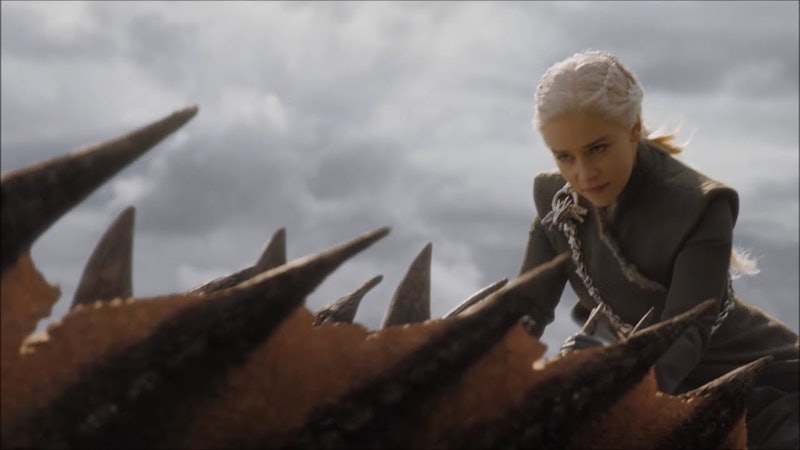 Game Of Thrones is back in full swing and, guys, I know right? We need to talk about it. As each episode airs, we get one step nearer to the end of the journey this incredible HBO show has taken us on. Which is a bitter pill to swallow and we all know it. If that wasn't anxiety inducing enough, things have seriously started to heat up and after last week's drama — it looks like it's about to go off in Westeros. In a fairly one-sided battle right? Well guys, rumours that Daenerys' dragon had babies is making it look like it is a one-sided battle, but not the side you had initially thought.

OK obviously, I am about to hit you with a lot of spoilers so consider this your warning.

Have you placed any bets on who is going to rule at the end? I seriously hope not because it feels like at this stage, it could be anyone's game. After last week, when we saw the second of Daenerys' three dragons slain by arguably one of the biggest d-bags ever, Euron Greyjoy, things weren't looking so great for the lot who had come down from the north. However, Reddit has been popping off about a potential game changer that would seriously bolster Daenerys and her crew. User Justzxcvbnm kindly brought it to our attention.

Shut the front door. How did we miss this?! So, you remember back in season five when one of Daenerys' dragon Drogon (who was kind of the biggest and scariest) disappeared for ages? Well, some people have speculated that Drogon spent that time laying eggs. That would explain her burning loads of fields and killing all those sheep — maybe she was doing it to feed her bambini dragons.

I know right? This is 100 percent too much to handle.

Also, remember the early season when the dragon eggs were kept on the fire the whole time? That would explain all the burning as well; Drogon was flipping burning up those eggs in an effort to get them to hatch. And guys, Drogon is the last dragon alive. So she might well be about to call in her kids to help. Gah.

Further evidence is the teaser trailer for episode five. The trailer was a bit "meh I have seen this before", with the mega cross bow being set up and Euron looking up to the sky. However, he looks a little bit shocked this time. Not only that, but also the sound of a dragon's roar and the memory of poor old Missendei's final words "dracarys," which basically means "burn those a-holes to the ground". Yep, making it look fairly possible that a whole bonus army of dragons are about to come to fight. Not to mention how fuming Daenerys was after her BFF lost her head (literally) and memories of her dad being the mad king. The fan theories about the mad queen might be about to come true.

Wow. OK. Roll on the next episode.

More like this
You’ll Definitely Recognise Both Of Ty Tennant’s Parents
By Maxine Harrison
'House Of The Dragon’s Theo Nate Is A “Massive” 'GoT' Fan
By Maxine Harrison
Rhys Ifans Has A Good Reason For Keeping His Love Life On The DL
By Maxine Harrison
'The Lord of the Rings: The Rings of Power' Revisits Iconic Spots From 'The Hobbit'
By Darshita Goyal
Get The Very Best Of Bustle/UK