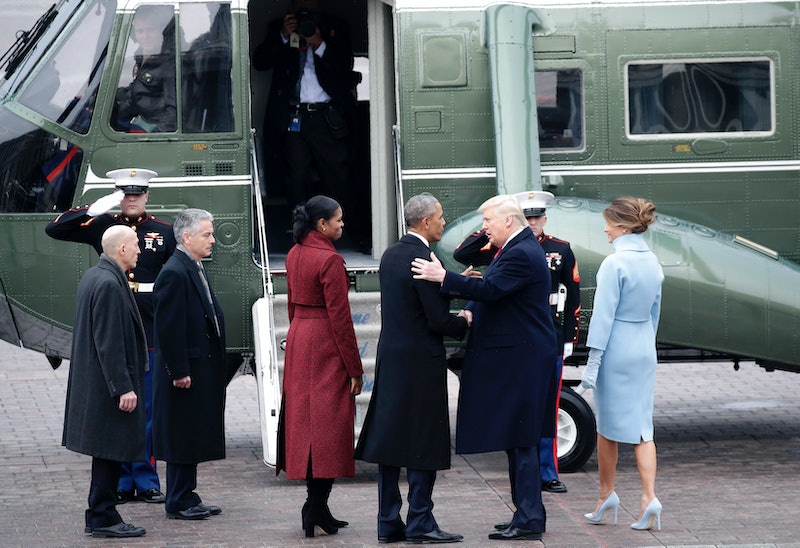 Update: The Washington Post debunked the rumor, writing in an article Friday afternoon that the confusion came from an ABC editing issue. "This is not a camera shot of a photo on the wall; it’s the actual photo, inserted into the video feed to show what ABC’s David Muir and Trump were discussing," writes Philip Bump.

Earlier: A journalist once referred to Donald Trump as a "short-fingered vulgarian," and ever since then, he's been notoriously insecure about the size of his hands. That insecurity reached absurd heights on Friday, with new speculation that President Trump may have photoshopped his hand to make it look bigger in a photograph that's now hanging in the White House. While that certainly seems like something Trump would do, the evidence so far is inconclusive.

It appears to have begun with a tweet from the Observer's Dana Schwartz, who spotted a picture of Trump hanging in the White House during an ABC interview with the new president. Schwartz posted that image, which depicts President Obama speaking with Trump on inauguration day, next to a Getty image of the same encounter, and noted that Trump's hand appeared bigger in the White House photo. Bustle has reached out to the White House for comment.

"Trump 100% photoshopped his hand bigger for this picture hanging in the white house, which is the most embarassing [sic] thing I've ever seen," Schwartz wrote.

The side-by-side comparison got over 20,000 retweets within two hours, but the difference was very subtle. Did Trump truly edit a picture of him in order to make his hand look better, or was this just yet another example of the internet prematurely jumping to a reasonable-sounding but ultimately unsubstantiated conclusion?

Twitter sleuths quickly got to work, using various photo comparison techniques in an attempt to figure out what exactly is going on here. They came to conflicting conclusions.

Joaquin Baldwin, a layout artist for Disney, argued that the image was modified. He created a GIF that allegedly flips between the Getty images source and the White House print, and in it, Trump's hand is clearly bigger in the White House print. Moreover, parts of the background around his hand balloon out as well; as Baldwin pointed out, this strongly suggests that somebody warped the photo to enlarge Trump's hand.

One source of the confusion appears to be the fact that ABC didn't actually depict the real picture hanging on the White House wall. Although the program features Trump and a journalist looking at that picture, the broadcast cut to an insert of the Getty image itself, not an actual shot of the picture itself.

What remains unclear is the source of the image in Baldwin's GIF — the one in which Trump's hand is clearly bigger. Baldwin hasn't yet responded to Bustle's request for clarification on this.