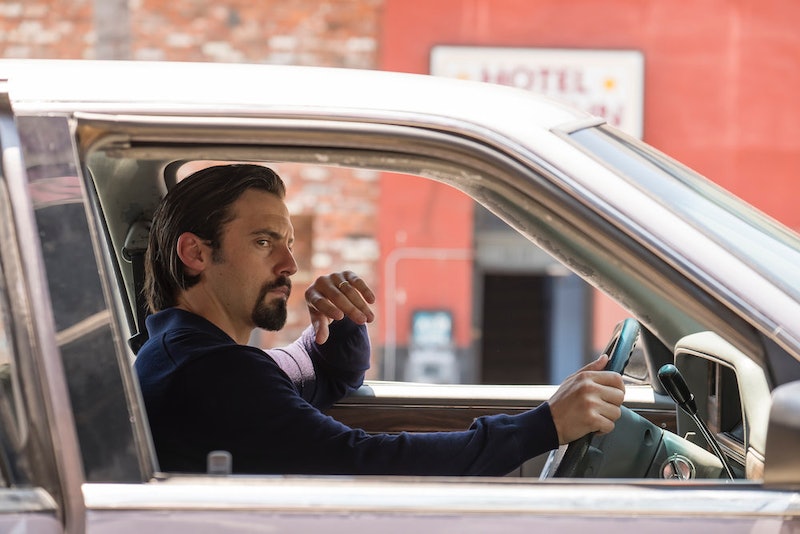 Kate blames herself for her father's death on This Is Us, but the grief-stricken daughter of Jack and Rebecca may not actually be as responsible as she thinks. Spoilers for the Season 2 premiere of This Is Us follow. After Jack revealed he was drinking again, a time jump saw a mourning Rebecca outside of the burntdown Pearson house. The timing of this information has led fans to wonder if Jack started the fire on This Is Us and died as a result. With him being a relapsed alcoholic, it's certainly reasonable to think he could have accidentally set fire to the family home while under the influence. However, even though This Is Us will not reveal any more information until the show is good and ready to, Jack causing his own death just doesn't feel right.

While the This Is Us Season 2 premiere didn't confirm that Jack specifically dies in the house fire, it seems safe to assume that he died right around the time of the fire — and quite possibly as a result of it. But, if you couldn't tell from Season 1, show creator Dan Fogelman is extremely strategic when it comes to releasing information and is keeping the exact details of Jack's death a mystery for now. During the PEOPLE and Entertainment Weekly viewing party for the Season 2 premiere, EW reported that Fogelman playfully discussed the fire theories surrounding Jack's death. Fogelman said, "Did he die in the fire? Did he get out of the fire? But we're not misdirecting — he didn't die four years later. Did he start the fire? Did Toby start the fire?" And while he was teasing fans a bit, these comments do seemingly confirm that Jack will die around the time of the fire — even if he doesn't die in the fire.

But how the fire began is a different question. And Fogelman addressed the cause in another EW interview when he said:

"What causes the fire is going to be heartbreaking. The small movements of our lives, and how big they can become if little things break the right way or the wrong way — I've always been fascinated by [the fact that] you could have met your husband or your wife if you had just not gone that way at the bar that night, or the friend hadn’t wanted to set you up. The great things in your life, how easily that sliding door could have gone a different way, as well as the tragedy. That's part of our story."

Most people probably didn't think the house fire was intentional, but this quote seems to confirm it was an accident. That's good to know because it's not out of the realm of possibility that a drunk and upset person could set a fire out of anger — even if that feels totally out of character for Jack. But if Jack is the one who caused the fire, then the most likely scenario is he made a devastating mistake while intoxicated that destroyed his family home.

However, as some fans have pointed out, having Jack cause the fire and then die shortly afterward would go against the hero father figure that Jack's children remember him as. Because even though This Is Us is known for inducing tears, the show is actually heartwarming at its core. So it would seem rather unnecessarily cruel to have Milo Ventimiglia's character not make a recovery from his alcohol addiction and cause his own death. As Reddit user EightyHM noted, it seems more likely that This Is Us would have Jack die as a hero since his adult children still revere him.

If Jack isn't the one who is responsible for the fire, there are many other contenders, including Kate. But one theory that is picking up steam is that it's actually the washing machine that will lead to the house fire. As previously quoted, Fogelman said the "small movements" of people's lives can "become [big] if little things break the right way or the wrong way." While he probably wasn't literally talking about objects breaking, Reddit user ashelizabethmoon noted that the improperly working washing machine in the basement played a huge part in the Season 1 episode, "The Best Washing Machine in the World." Perhaps that was foreshadowing the tragedy that the washing machine would cause later on. Even more fascinating is the fact that people on Reddit were discussing this theory eight months ago — long before the fire reveal.

Fogelman told EW that fans will have all the answers about Jack's death after Season 2. But that doesn't mean he won't drag viewers along when it comes to the details surrounding the fire and Jack's subsequent death. So until Fogelman reveals what happened, you can theorize away and continue to hold out hope that Jack isn't the one who is responsible for destroying the home — and the family — that he had built.

More like this
Where Is Lionel Dahmer Today? Jeffrey Dahmer’s Father Reflected On The Serial Killer’s Death In 2020
By Brad Witter
Here's What Jeffrey Dahmer's Dad Has Said About His Other Son, David
By Grace Wehniainen
If 'Entergalactic' Season 2 Happens, You Could Get A New Kid Cudi Album
By Kadin Burnett
24 Years Ago, 'Friends' Dropped Its Most Underrated Ross & Rachel Episode
By Grace Wehniainen
Get Even More From Bustle — Sign Up For The Newsletter