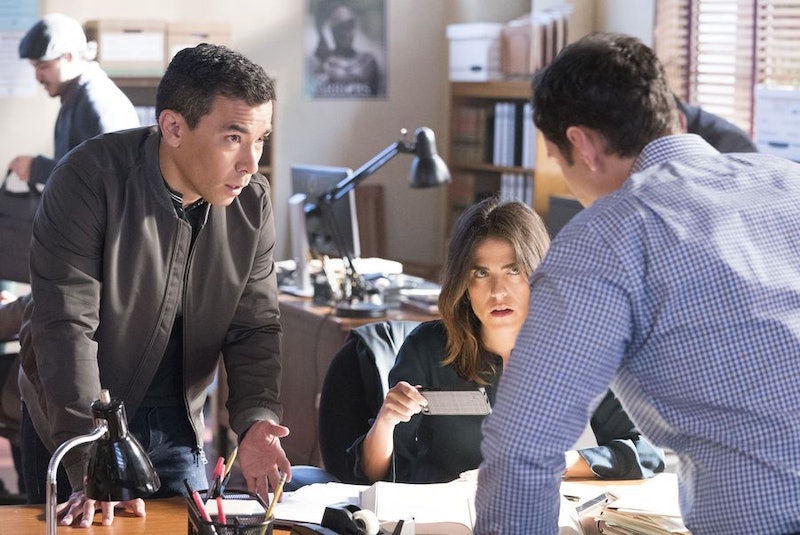 How To Get Away With Murder likes to give it all away up front and then fill in the pieces as we go — it’s a mystery series, but in reverse. The mystery (so far) of Season 4 is that Laurel was pregnant at the end of Season 3, and now, in flash-forwards, she is not pregnant, nor does she have a baby. Where is that baby? Did Laurel’s baby die on How To Get Away With Murder? Things are looking pretty sketchy at that hospital. Spoilers for the Oct. 12 episode.

Each week has revealed more and more, so let’s recap: Laurel is at the hospital, and so is Jimmy Smits' unnamed character, who also happens to be Annalise’s court-mandated therapist (she married her other one, FYI, before letting her interns kill him with a trophy). Frank is, as well, and we don’t know if it’s because he’s still working for/with Annalise or if it’s because he’s still in love with Laurel (even though he’s currently living with Bonnie, my guess is the latter). They are all frantically calling Annalise, who is conveniently not answering her phone, and Laurel is screaming “Where is my baby” and the therapist is trying to get the doctors to sedate Laurel so she doesn’t burst a blood vessel shrieking. It’s creepy to see her agency taken away from her, and it’s a bizarre turn for the show.

Bizarre, though, is what How To Get Away With Murder does best, and the Oct. 12 episode piled that on. This time around, Michaela shows up at the hospital, and girlfriend looks fried. It could be the new internship she just landed, or it could be the fact that her friend’s baby has been taken away. “Is he dead?” Michaela asks Smits' character. While it’s unclear at first if she’s talking about the baby or anyone else (because, as Michaela says, everyone dies on this show), the camera pans out to little bassinets of fresh babies. A few things struck me here — that is the barest hospital that I’ve ever seen. It’s just beige, and there’s nothing in the rooms. Is it a psychiatric ward? Has Laurel been committed?

Laurel is not mentally ill, but she is about to embark on a big, dangerous battle with her family. Laurel figured out that her father had his henchman, Dominick, kill Wes, who is the father of Laurel’s baby. They were also shacking up for a while before his death, but I refuse to see it as anything other than a fling because my brain can’t let it. In any case, Laurel told her father she had an abortion and kept the baby, a boy. Now, Laurel is plotting to ruin her father’s company, primarily by having Michaela, who just landed a plum intern spot at the firm that handles Laurel’s dad’s business, run a double-agent side gig. Laurel’s dad has literally had someone killed he didn’t want around anymore, so it’s probably safe to say that if he had to choose between his business and his daughter, he’d choose his business. If Laurel betrayed him and he found out, Laurel’s dad would punish her. Laurel has made note in past episodes of his ruthlessness.

And if Laurel’s dad had no problem killing his grandchild’s father, he wouldn’t have any problem taking the baby away from Laurel and making her seem unfit. Dominick, who has proven himself to be a messy assassin (his killing of Wes didn’t go as smoothly as he would have liked), Dominick could have gone to take care of Laurel and accidentally hurt the baby, too. This particularly makes sense because Michaela is at the hospital, and she’s the one that would be getting the best information for Laurel. With Michaela on research and Laurel running point, they could probably take down Laurel’s father’s company. But vengeful, powerful men have far reaches, and Laurel’s dad’s could extend to the life of his grandchild.