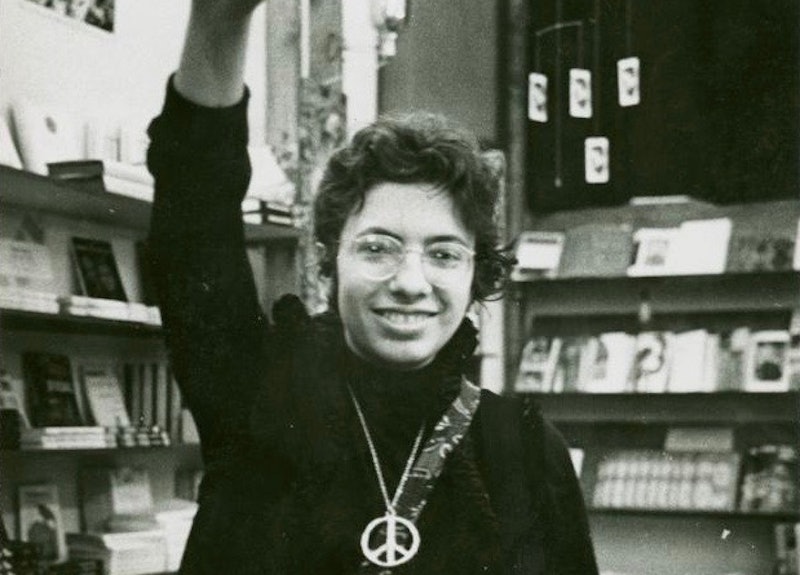 Photo courtesy of Martha Shelley, as photographed by Diana Davies in 1969

Stonewall has a distinct place in the collective memory of the United States, but for the LGBTQ community, it's the big historical event. It's when the fight for gay and lesbian rights — and eventually, bi rights, trans rights, and queer rights, too — "started," or so the common understanding goes. With New York City hosting the WorldPride for Stonewall's 50th anniversary this year, the country's largest celebration of living out and proud is looking back to the beginning. But just what Stonewall was the beginning of isn't entirely clear cut.

Back in June 1969, a police raid on The Stonewall Inn, the now-famous New York City gay bar, resulted in violent clashes between patrons and police. It was followed by several nights of protests. That moment of pushback is what has been celebrated every year since in the form of what we now call Pride parades.

In most cities, Pride parades are held during the last weekend in June to commemorate the uprising, which started in the early morning hours of June 28. This year is no different, but it will take place on an even greater scale in New York City, as LGBTQ people from around the world arrive to commemorate a movement that started 50 years ago.

Two people who witnessed the riots in 1969 and a professor of LGBTQ history who has researched the events share with Bustle what happened that day, and why it still very much matters for Pride now.

Participants in what is now known as the Stonewall Riots would likely be surprised to know that there are millions of people flying in from around the world to mark its 50th anniversary this year. The symbolism of Stonewall — which ultimately led former President Barack Obama to name the bar a national landmark in 2016 — wouldn't come until later.

Martha Shelley, an author who was 25 and active in the lesbian rights movement at the time, tells Bustle she was outside the bar when riots began on their first night — and she had no idea what the commotion was about.

"What I know is that I was passing by the Stonewall on the Saturday night when it started," Shelley, who is now 75 and lives in Portland, Oregon, says. "I saw young people throwing things at cops. I thought it was an anti-war demonstration, and I didn’t realize until the following Monday that it was a gay riot."

In recent years, there's been a lot of debate about what led to these events (some have suggested that Judy Garland's death was actually that upsetting), and who instigated resistance against the police. Who threw the first brick at the police, or if there was even a brick thrown at them in the first place, is unknown.

Some things, though, are clear. Marc Stein, a San Francisco State University historian and the author of The Stonewall Riots: A Documentary History, tells Bustle that police undeniably raided the bar. Based on the documents that Stein gathered for his book, the timeline of what happened, including police reports, suggests that the police were initially at the bar undercover.

Those officers left to get backup and then reentered, asking for everyone inside to produce identification, Stein says. Some in the bar — likely the people of color, trans people, those without IDs like undocumented immigrants, and anyone who talked back — were taken out of the bar to be brought to the police station, according to Stein.

As police began to remove patrons from the bar to wagons outside, Stein says the crowd began to grow rowdier, to the point that some of the people the cops were detaining tried to escape, perhaps with the help of protesters.

"At some point the crowd grew raucous enough and violent enough — and the police were certainly violent as well — that the police ended up retreating into the bar," he says, noting that police were then "trapped inside the bar, waiting for reinforcements."

The clashes didn't end after just one night. Dana Beyer, a trans woman and retired eye surgeon who has run for state office and is on the board of a trans rights organization in Maryland, was then just 17 years old and taking a trip into Greenwich Village from Queens on a first date. Beyer and the woman who would later become her wife happened upon the second day of the riots, which participants say were colored by suggestive chants toward the police and kicklines, like the Rockettes would do, throughout the street.

"We rose from the subway on the Seventh Avenue stop, just up the block from what was The Stonewall Inn, and discovered we were caught up in what was a rather chaotic scene, police and demonstrators running around," Beyer, now 67, recalls.

The last protests took place on what's thought to be the night of July 2, when, according to a New York Times article featured in Stein's book, four people were arrested and charged with harassment after police "dispersed a hostile crowd" of about 500 people. The effects of the rebellion lasted long after that night, however.

It wasn't the enduring nature of the riots — or uprising, as Beyer prefers to call it — that created the symbolism around Stonewall. As Stein tells Bustle, it's not the revolt itself that made those days historic, but what came next that cemented Stonewall's place in history.

There had actually been other clashes between gay protesters and police across the country, some of them large in scale, Stein says. In San Francisco, there was the Compton's Cafeteria riot in the Tenderloin, and in Los Angeles, there were protests at the Black Cat in Silverlake. None of them changed the course of LGBTQ history in the same way.

It's really the organizing that came immediately after and persisted over the next few years that explains why Stonewall stuck as such a defining moment, Stein notes. "People would invoke the riots" during the months to follow, he says, "but it took a while for it to loom quite so large."

"For most of them it was the first time they had been openly gay in public, in the sunshine."

Shelley may very well have been one of the people to make this happen. She says that as soon as she read that what she'd witnessed was in fact a gay riot, she went to meet one of the leaders of the Daughters of Bilitis (DOB), a pre-Stonewall lesbian rights organization. "We need to have a protest march," Shelley recalls telling the DOB leader. They decided to contact the Mattachine Society, a key pre-Stonewall gay rights organization. They ended up planning a protest for late July, one month after the march.

"People like me, we had all been politicized during the Civil Rights, anti-war, feminist movement and it was in the air," Shelley says. "Those of us who were already active in one way or another, we seized the opportunity."

The "little march" that they had was "maybe a couple hundred people," Shelley recalls.

"For most of them it was the first time they had been openly gay in public, in the sunshine — instead of sneaking into a bar at night to meet other gay people," she adds.

The organizers who planned the July protest with Shelley eventually came to be known as the Gay Liberation Front (GLF), one of the key organizations that formed after Stonewall, according to Stein. GLF branches across the country and other groups like it decided to keep the protest alive every year. These annual parades became so successful that they not only started the Pride movement, but rewrote the history — perhaps incorrectly — of the gay rights movement, too.

As Shelley's participation in the Daughters of Bilitis shows, there were already lesbian, gay, or "homophile" organizations in existence before Stonewall, and thus that event wasn't truly the start of the gay and lesbian rights movement. Nor is it the beginning of the trans rights movement. There were already periodicals written by and about trans people at the time, Stein says. Perhaps surprisingly, those publications pretty much ignored Stonewall.

Since 1965, the Mattachine Society and other "homophile" groups had been protesting outside Independence Hall in Philadelphia every July 4 for freedom and equal rights. One attendee reportedly said the Liberty Bell "was a great symbol." The NAACP's earlier use of the site for civil rights protests had inspired the gay rights organizers, according to Philadelphia magazine.

This changed in 1970, the first year following Stonewall. GLF chapters across the country pushed to commemorate the uprising with Christopher Street Liberation Day events in New York, Chicago, and Los Angeles in what were essentially first Pride parades.

According to a newsletter in Stein's book, the Eastern Regional Conference of Homophile Organizations agreed and passed a resolution to change the annual Philadelphia protest in "in order to be more relevant, reach a greater number of people, and encompass the ideas and ideals of the larger struggle in which we are engaged."

"It was the first, real, big gay Pride march," Shelley tells Bustle, noting that it went from Greenwich Village all the way up to Central Park. There were no fancy floats or parties. "We just marched with our banners," Shelley says.

The GLF's decision to commemorate the uprising "really cemented the status of Stonewall," Stein says, which is what ultimately fed the perception that Stonewall was the starting point of the gay rights movement.

Just because Stonewall isn't exactly the "beginning" of the gay rights movement doesn't mean it wasn't a big deal. Shelley, who talks matter-of-factly about this historical "moment of glory," acknowledges the influence and the "huge change" that it had on her life.

"I too was kind of not that proud of being gay — I was still struggling," she tells Bustle. Shelley credits Stonewall with helping her live openly and proudly as a lesbian. "After that, there was no looking back. I can’t tell you the psychological difference that it made — the extent to which that changed me."

Stonewall created a space for people like Shelley to live openly, even if they weren't out at the time. Beyer tells Bustle that stumbling upon Stonewall had a huge impact on her, even though she remained on the periphery of the protests.

"For a closeted trans girl at the time, it was rather shocking in its way," Beyer tells Bustle. "Until then, I had been deeply closeted and had gone to the Village and had gone to associate myself with 'my people' but I had done so completely as a cis, straight person."

Whether or not it was the start of the gay rights movement, Stonewall is the driving force behind the Pride we see today. It is now seen as a collective coming out for the LGBTQ community, even for those who might not have been ready.

"Had we known about it, I wouldn't have gone," Beyer says, adding she's glad she was there. "It shook me up. For me, the uprising was internal. It was the first true recognition that I wasn’t alone."

More like this
8 Charities To Donate To During Black History Month
By Alexis Morillo
These Artists Are Reimagining Black History Month To Create A Better Future
By Katie Mitchell
24 History-Making Black Women You Probably Didn't Learn About In School
By Ayana Lage and JR Thorpe
Gen Z Are Twice As Likely To Identify As Queer, According To New Data
By Sam Ramsden
Get Even More From Bustle — Sign Up For The Newsletter
From hair trends to relationship advice, our daily newsletter has everything you need to sound like a person who’s on TikTok, even if you aren’t.