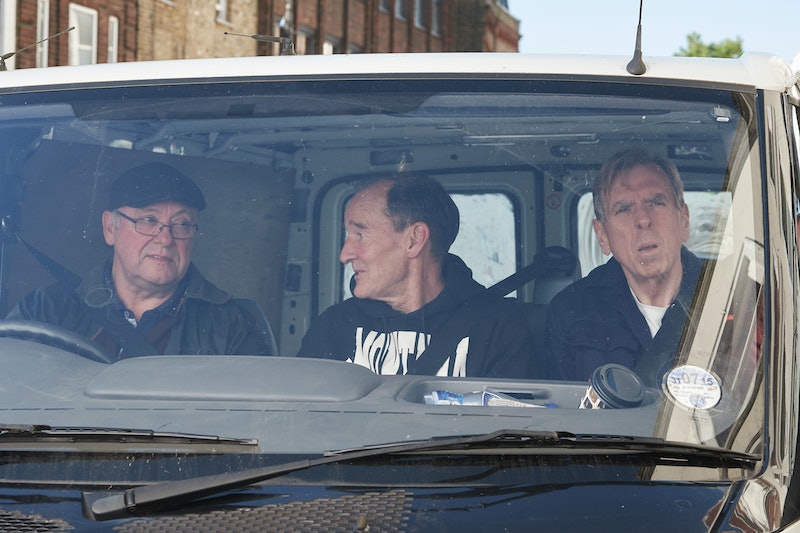 Depicting one of Britain's most notorious robberies is no mean feat, but ITV have certainly captured the nation's attention with their four-part series of the 2015 Hatton Garden heist. Obviously some liberties have to be taken in adapting this real-life story into four hours of television, but did the Hatton Garden robbers really use wheelie bins to transport the valuables they stole, or was this a fictional addition by the show's writers?

Well, as The Telegraph reported in 2015, the use of the wheelie bins did actually happen. The gang initially used the bins when they began their heist on Good Friday as a way to transport the tools necessary to drill through the concrete wall into the vault. When they left the Safe Deposit Company building on Easter Sunday, the men could be seen on CCTV "struggling with a wheelie bin that [was] thought to be crammed full of cash and gems stole from safe deposit boxes. Other wheelie bins were also dragged to the van." These bins were then loaded into the white transit van, and were kept outside Kenny Collins house overnight before the gang sorted out the loot on the Bank Holiday Monday as a "temporary solution", the Radio Times reports.

Despite triggering an alarm while they made their way into the vault, Scotland Yard didn't respond and missed "their chance to catch the thieves red-handed." The gang would eventually end up stealing "an estimated £60 million in gems, cash and other valuable items," according to The Telegraph. As the heist was cleverly planned to take place over the Easter weekend, police weren't aware of the break-in until two days later, after the company reported a burglary. As the Radio Times reports, the men were caught six weeks later after being identified on CCTV. But even though the thieves were caught, the valuables they stole "have yet to be fully recovered."

Writer and executive producer Jeff Pope told the Radio Times that their retelling of the heist is as close to what happened in real life as it could possibly get:

"There is nothing in there that has come out of thin air purely because we thought that would add a bit of spice to the pot," he said. "The absolute number one source was the transcripts, and that's where we worked with co-producer Jonathan Levi. We did have a route into one of the families, a backdoor route shall we say, and I don't want to go into any more detail than that."

Pope also told media at a press event (via The Express) that it was important to remind viewers that this heist wasn't a victimless crime, no matter how unbelievable it may have been.

"I think it's inevitable that if a group of humans come together in a task and try as hard as they can to achieve it, it's impossible not to root for them I guess," he said. "I don't want to try and pretend that we don't care whether we get into the vault or not for sure but I think the balance was the key thing."

Pope added: "But then you always have to remind yourself it's not victimless, they're not Robin Hood, they did this for themselves."

Hatton Garden concludes tonight (May 23) on ITV at 9 p.m. You can catch up with the rest of the series on the ITV Hub.

More like this
After The Bling Ring, Nick Prugo Was Embroiled In Another Scandal
By Arya Roshanian
A Familiar 'Sex Education' Star Just Got A Major Role In Fantasy Teen Drama 'Silver'
By El Hunt
Here's When 'The Crown' Season 5 Will Premiere — And What To Expect
By Bustle Editors
Louisa Harland’s New Show Is A Far Cry From Derry Girls
By Frances Stewart
Get The Very Best Of Bustle/UK