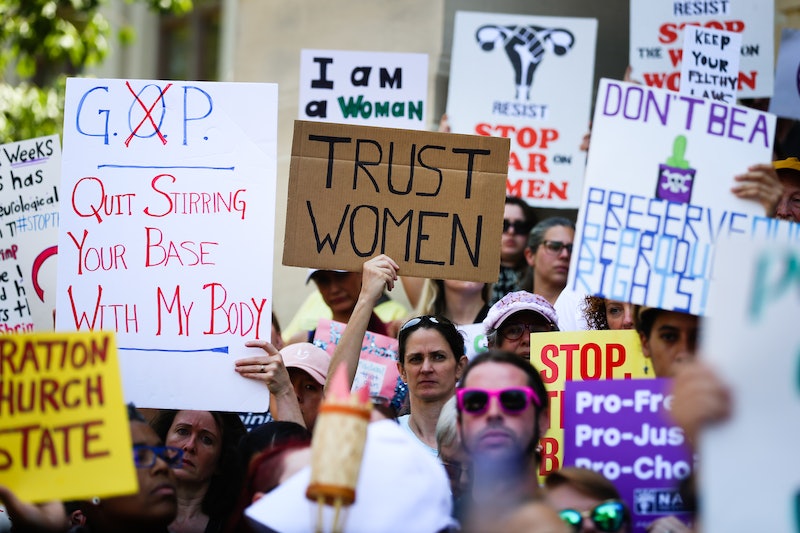 In the three weeks since Georgia passed a restrictive "heartbeat" abortion bill, many in Hollywood have spoken out against the legislation that would effectively ban abortion after the detection of a fetal heartbeat should it become law. While some, like Alyssa Milano, have threatened to boycott the state where many movie and TV projects are filmed, the studios have kept mostly quiet on the matter. On Wednesday, May 29, however, Disney CEO commented on Georgia's anti-abortion bill, expressing that it's likely the company will stop filming in the state if the bill goes into effect.

While speaking to Reuters at Disneyland in Anaheim, CA, on Wednesday, May 29, Walt Disney Company CEO Bob Iger commented on the newly signed bill that would prevent pregnant women from getting an abortion after six weeks, when most women don't know they're pregnant yet. He stated it would be "very difficult" for Disney and Marvel to continue filming in the state if it becomes law in January 2020.

“I rather doubt we will [keep filming projects in Georgia],” Iger told Reuters. Recent Disney projects filmed in the state include Black Panther, Avengers: Endgame, and the upcoming Marvel TV shows that include a Scarlet Witch and Vision team-up. “I think many people who work for us will not want to work there, and we will have to heed their wishes in that regard. Right now we are watching it very carefully.”

Iger's comments come mere days after a May 28 Variety report that questioned how Hollywood is reacting to anti-abortion bills being introduced and debated in states like Georgia, Alabama, Missouri, Ohio, and Louisiana. In the piece, Variety reported that "not one major studio would comment" for their story including The Walt Disney Co., WarnerMedia, Sony Pictures Entertainment, NBCUniversal, Viacom, Fox, and Amazon Studios. That is, except Netflix, which became the first studio to comment.

When asked by Variety how Netflix will respond to Georgia's abortion bill, Netflix's chief content office Ted Sarandos said the studio was willing to take legal action. "We have many women working on productions in Georgia, whose rights, along with millions of others, will be severely restricted by this law,” Sarandos told Variety in a statement. “It’s why we will work with the ACLU and others to fight it in court."

Sarandos provided no additional details as to how Netflix plans to contribute the ACLU's legal fight against the ban, but did tell Variety that "given the legislation has not yet been implemented, we’ll continue to film there" adding "should it ever come into effect, we’d rethink our entire investment in Georgia.”

Already, some Hollywood creators have pulled their projects from filming in Georgia including The Handmaid's Tale director Reed Morano's new Amazon Series, The Power and Kristen Wiig and Bridesmaids co-writer Annie Mumolo's new movie Barb and Star Go To Vista Del Mar. Others have chosen not to boycott Georgia entirely including Jordan Peele and J.J. Abrams' production companies, which have promised "100% of [their] respective episodic fees” for their upcoming joint TV show Lovecraft Country will be donated to the ACLU of Georgia and Stacey Abrams' nonprofit Fair Fight Georgia, according to IndieWire.

With more states passing anti-abortion bills, the question of how Hollywood should respond to the legislation is an ongoing conversation. One that more studios, undoubtedly, will need to have.

More like this
Everything To Know About The Long-Awaited ‘Community’ Movie
By Stephanie Topacio Long
Gabby Petito’s Family Responded To The New Lifetime Movie About Her Final Days
By Grace Wehniainen
The 50 Most Powerful Characters In The Marvel Universe, Ranked
By Johnny Brayson and Nola Pfau
Paul Mescal, Man Of Mystery
By Samantha Leach and Heather Hazzan
Get Even More From Bustle — Sign Up For The Newsletter