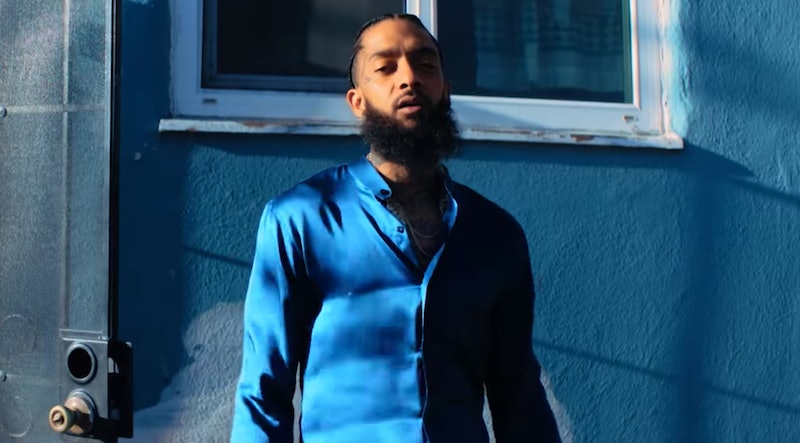 On the same day as his new album debut, DJ Khaled released Nipsey Hussle’s final music video for their joint track “Higher” — and it’s a bittersweet homage to the late rapper’s legacy. “Higher,” which also features the vocal stylings of John Legend, comes from Khaled’s latest album Father of Asahd, which dropped on Friday, May 17. The soulful music video opens with a tribute to the rapper that reads, "In Loving Memory of Nipsey Hussle."

Hussle was fatally shot on March 31 at the storefront of his apparel store, Marathon Clothing, in South Los Angeles. The rapper, born Ermias Joseph Asghedom, is survived by two children, son Kross and daughter Emani, and longtime partner Lauren London. His death sent shockwaves across the hip hop and the local community, which bore the fruit of his activism and philanthropy. In a March 2018 interview with the Los Angeles Times, Hussle — who, among other philanthropic efforts, cultivated STEM initiatives for inner cities across the country — spoke about his cultural activism. “I just want to give back in an effective way," he said. "I remember being young and really having the best intentions and not being met on my efforts… you see no structures or infrastructure built and you get a little frustrated.”

Hussle's commitment to his Los Angeles community is evident in the video, in which he emerges from a similarly-hued house and croons about his upbringing in the Crenshaw neighborhood of Los Angeles, as he raps, "Pops turned 60, he proud what we done / In one generation, he came from Africa young / He said he met my moms at the Century Club / Los Angeles love kinda of like Hussle and Boog." He also gave a shout out to his children, Emani and Kross Asghedom, continuing, "Mani turned ten, Kross turned two; startin' to see this life shit from a bird's view / We the ones that made millions off the curb, fool.”

Prior to the "Higher" music video release, DJ Khaled revealed that all proceeds from the track would go to Hussle’s children. The “Wild Thoughts” rapper took to Twitter on Wednesday, May 15, to write about the video, which, after “much prayer and reflection; and with the full support of the Asghedom family,” he’s decided to share with the world.

Khaled continued, “The very title of the song reminds us that vibrating on a ‘Higher’ level was the essence of Nipsey’s soul. It is in this spirit, of moving forward, of preserving his mission that I, my co-writers, producers and label partners are donating 100% of all of our proceeds from ‘Higher’ to Nipsey’s children, Emani and Kross.”

Legend also took to social media on Wednesday to commemorate Hussle's legacy. “Proud to be a part of this inspiring record with @djkhaled and @nipseyhussle. We lost him too soon. The proceeds will go to his loved ones," he wrote on Instagram.

With its stunning visuals and soulful sound, "Higher" certainly marks a bittersweet final video for Hussle. Though it is also proof that, though he may be gone, his music will live on for years to come.