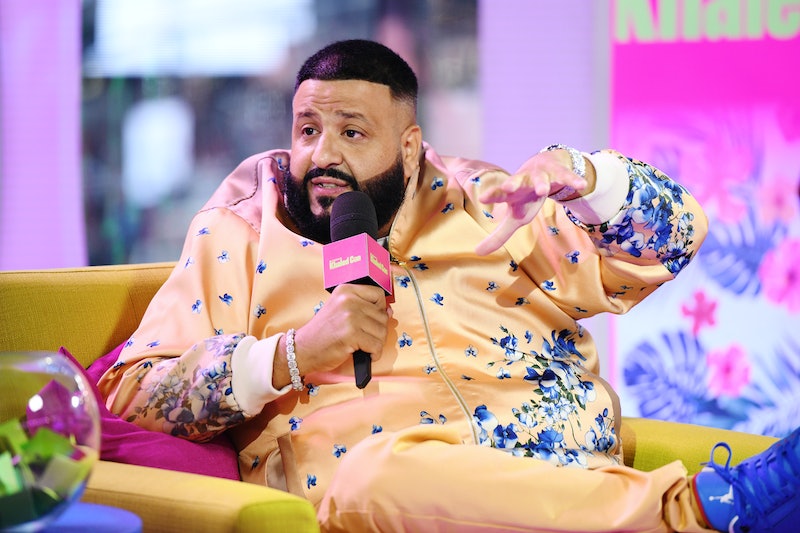 From the opening Queen parody to a Grace And Frankie rap, the SNL Season 44 finale was filled with music. In fact, DJ Khaled's SNL performance basically turned the show's studios into a makeshift music festival. He brought out that many stars.

DJ Khaled has been a major part of the pop music landscape for over a decade, though what exactly he does may evade some casual listeners. He doesn't rap or sing on his songs, and instead simply repeats a number of catchphrases while making way for other performers to take the lead. It's not clear how involved in the beat-making Khaled is, either, as all of his songs are co-produced with other musicians — his Father of Ashad album features notable production from famous beatmakers Tay Keith and LVM. Basically, he's a glorified hype man, and his SNL performance was a perfect showcase of what DJ Khaled does best: curating acts and lifting up collaborators on his shoulders.

DJ Khaled made it abundantly clear from his first moment onstage that his SNL appearance was a massive triumph. "They said I would never do SNL," he claimed, not offering context or explanation for who was accusing DJ Khaled of not being able to headline his own SNL episode, "So I'm doin' the SNL finale — another one!" " Another one" is one of Khaled's many catchphrases that made an appearance during the night, as did his popular refrain "We the best."

His performance itself featured DJ Khaled serving as a hype man for a variety of guests and repeatedly encouraging fans to put their hands in the sky. During his first performance, Khaled introduced Lil Wayne and Big Sean to perform the song "Jealous" off of his latest album Father of Asahd. They then left the stage to make room for Jeremih, Meek Mill (who appeared as an SNL musical guest back in January of 2019), Lil Baby, and J Balvin for a shortened rendition of "You Stay," closing the first interlude out by repeating the mantra "Summer starts now" as the show went to commercial.

The second performance slowed things down, bringing out SZA to perform she and Khaled's "Ms. Jackson"-sampling collaboration "Just Us." Finally, Meek Mill came back out to perform "Weather the Storm" before Khaled tapped John Legend for their track "Higher," a collaboration with the late Nipsey Hussle. An image of Nipsey Hussle, who passed away about a month and a half prior to Khaled's performance, adorned the front of Khaled's hoodie, and his profile was projected above Legend's piano during the performance.

While Hussle may not have gotten the opportunity to perform on the SNL stage while he was alive, this tribute allowed fans of the late rapper to celebrate him, and served as an introduction to the artist for viewers who may not have been familiar with him during his life. Khaled's tribute to his fallen collaborator was a perfect encapsulation of what Khaled does best: celebrating others and providing musicians with a platform to shine.