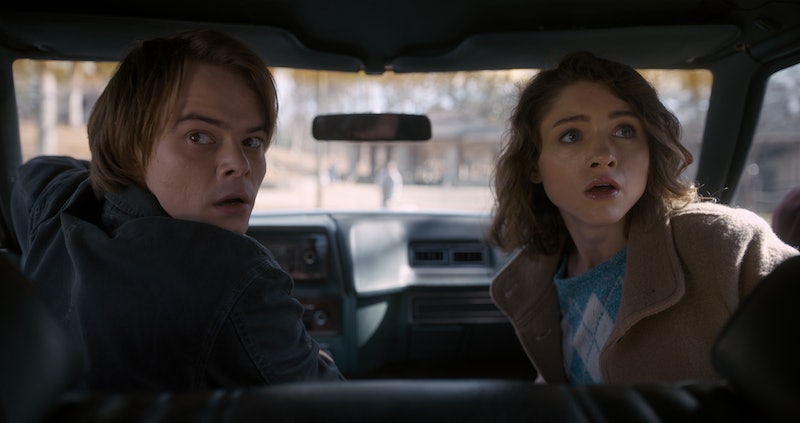 When there are demogorgons running around Hawkins, Indiana, it's easy to forget that the most important part of Stranger Things is the love triangle between Nancy Wheeler, Steve Harrington, and Jonathan Byers. Just kidding. But fans are really invested who Nancy will ultimately choose, and those who were shipping Nancy and Jonathan (Nonathon? Jancy?) were distraught when it was revealed in the Season 1 finale that Nancy and her boyfriend Steve were still together, especially when you consider that Steve is basically the dictionary definition of a f*ckboy. But all the hopeless romantics out there are holding out hope that this season will finally determine whether Nancy and Jonathan will end up together.

Last I checked, Nancy's boyfriend Steve was a grade-A jerk (as well as Jean Ralphio's father). Contrast with Jonathan, a sweet, sensitive photographer who just wants to find some friends, and it's pretty clear who Nancy's choice should be. (Though, it can't be ignored that he took some pictures of Nancy without her knowledge last year. Hopefully, he's learned why that's wrong.) But alas, even though Nancy gave Jonathan a new camera for Christmas, a silent tear rolled down the cheeks of Team Jonathan as he had to witness Nancy snuggling up with Steve, and was left mourning his unrequited love from afar. Okay, so maybe it wasn't actually that dramatic, but you get the picture.

The Season 2 trailer doesn't provide many hints in the way of romance for Jancy, but it does seem like they will definitely be hanging out a ton. After all, it's Jonathan who Nancy really turns to in the first season when she realizes there is something really bizarre going on in Hawkins, so it makes sense that she would go to him again when it seems like things aren't exactly solved for good. But Matt Duffer, one half of the Duffer Brothers pair who created the show, told IGN that it might just be too unrealistic for Nancy to end up with Jonathan. He said:

"Jonathan is a complicated guy. He's not the smoothest when it comes to dealing with girls. He's never had — in my eyes anyway — he's never had a girlfriend. So he doesn't really know what the hell he's doing. Whereas Steve knows what he's doing. I feel it's very realistic. Some of it is just me still angry about High School, in a very immature way. I never got a girl in High School. It didn't happen. If Jonathan ends up getting Nancy that's like a fantasy to me — it doesn't feel very realistic. But maybe we can build to it."

With all due respect, Mr. Duffer, having a popular girl end up with a kind of dweeb-y guy is not the most unrealistic thing occurring in your show about parallel universes and demogorgons. Give the people what they want! Because according to these tweets, a big contingent of fans are hoping Jancy becomes a reality in Season 2:

There were also a few people with an interesting alternative solution to the love triangle debacle:

But even if it's not clear yet whether Nancy will ditch her terrible boyfriend for Jonathan in Season 2 (or date the both of them at once), fans can be satisfied by evidence that the real life Nancy and Jonathan are dating. That's right: 20-year-old actress Natalia Dyer and 23-year-old Charlie Heaton were spotted holding hands in New York City between seasons, fueling rumors that the two co-stars have a romance IRL, even if Nancy and Jonathan don't. Or won't.

Their Instagram accounts also indicate that the pair seem to be spending a lot of time together:

It seems like Natalie and Charlie once traded shoes:

They even posted near-identical photos for National Ice Cream Day:

Even though the pair has yet to confirm they're a couple, the signs are there. Which leaves the question: will art soon imitate life? Is there hope yet for Jancy to become a reality? I guess we'll just have to wait impatiently for Season 2 to see.

More like this
Kate Bush Revealed The Real Meaning Behind 'Running Up That Hill' Lyrics
By Darshita Goyal
What’s New On Netflix: Meet 'The Real Bling Ring'
By Arya Roshanian
What’s New On Netflix: Camila Mendes & Maya Hawke 'Do Revenge'
By Arya Roshanian
‘The Ultimatum: Queer Love’ Is Officially On The Way
By Radhika Menon and Kadin Burnett
Get Even More From Bustle — Sign Up For The Newsletter