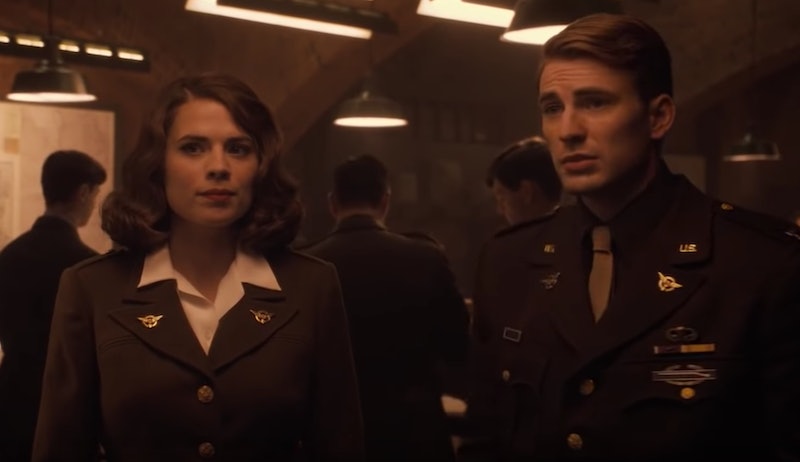 Spoilers ahead for Avengers: Endgame. In Marvel Studio's recently released billion-dollar blockbuster, Endgame, one of the most shocking events — of which there were many, so this is really saying something — occurs at the very end of the movie, when Steve Rogers (Chris Evans) goes back in time to the '40s and lives his life out in an alternate timeline without having been frozen in ice so he ages along with the love of his life, Peggy Carter (Hayley Atwell). That plot twist raises so many questions about what Steve and Peggy's — or Steggy's, if you ship it — life together looked like, which the source material might help answer. So do Steve and Peggy have kids in the comics?

Not only do they not have kids, but in Marvel comics, Steve and Peggy never even get married. So Endgame's portrayal of the couple finally getting to share their long-awaited dance was a strictly-MCU moment. Some fans have pointed out that the movie's portrayal of Steve and Peggy living out their lives together might mean that Steve Rogers could have been Peggy's husband all along. In Captain America: Winder Soldier, we see pictures of her and her children when the younger Steve goes to visit an ailing Peggy, but no husband. In the series Agent Carter, Peggy ends up with Daniel Sousa (Enver Gjokaj), making some fans believe at the time that he was that future parter.

Just because Steve and Peggy don't have kids in the comics doesn't mean that they don't create a family in this new MCU alternate timeline, which will most likely only exist in Marvel fans' imaginations rather than playing out on screen. It's definitely comforting to know that, while it's terribly sad that Chris Evans will likely no longer play Captain America in MCU movies, his beloved character gets to live out the life he always dreamt of.

In the comics, Steve has kids with other women besides Peggy, too, so if you have high hopes for Steve becoming a family man, they're at least somewhat validated, if not with his MCU soulmate. The comics have portrayed Steve having two kids in two different timelines. One of the women who Steve Rogers has kids with in the comics is — get this — Natasha Romanoff, after the two get married in an alternate future.

According to CBR.com, the relationship between Cap and Black Widow isn't exactly acknowledged by mainstream comic fans. The child that Cap and Black Widow have though, named James Rogers, appears in the 2010 Avengers comics, as well as the movie Next Avengers: Heroes of Tomorrow.

Cap's comic book progeny will most likely never appear in the MCU, which may be just as well considering how complicated the whole thing is. Whether they had a family or not, it seems that he and Peggy had a happy life together.

More like this
Zendaya Shares Intimate Photo With Tom Holland To Wish Him A Happy Birthday
By Bustle Editors
The First 'Percy Jackson & The Olympians' Teaser Comes With An Ominous Warning
By Grace Wehniainen
Nicola Coughlan Shared A Lady Whistledown Excerpt From ‘Bridgerton’ Season 3
By Grace Wehniainen, Alyssa Lapid and Sam Ramsden
The New Bachelor Will Be Announced Next Week & Here Are The Top Contenders
By Grace Wehniainen
Get Even More From Bustle — Sign Up For The Newsletter