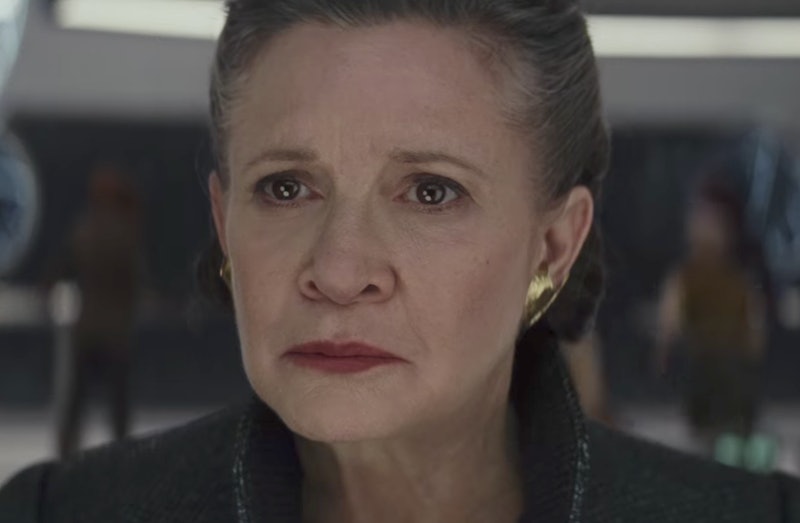 On Monday night, the full trailer for Star Wars: The Last Jedi finally premiered, and although it's gotten fans even more pumped for the next installment of the legendary series, a few are also worried about what's to come. There's one detail in The Last Jedi trailer that makes Carrie Fisher's appearance even sadder... if, of course, what the promo is leading us to believe turns out to be true. Of course, seeing Leia in Episode 8 knowing Fisher's real life fate was always going to be difficult, but now, it looks like it might be even more brutal than anyone imagined.

Following Fisher's unexpected death last December, Star Wars fans began wondering how Leia's exit from the series would happen. That's a question that still remains unanswered, but the trailer did hint at what the future could hold for her. It seems like Leia might die the same way Han Solo did: at the hands of their son, Kylo Ren.

Unquestionably the most heartbreaking moment of The Force Awakens was seeing Kylo kill his father rather than leave the dark side and join his family again. Who could forget the look on Han's face when he realized his son was about to betray him? And now, the Last Jedi trailer is bringing all those emotions right back.

The trailer emphasizes how much power Kylo Ren holds, accompanied by a quote from him that definitely sounds ominous. "Let the past die. Kill it if you have to," says Kylo's voiceover. "That's the only way to become what you were meant to be."

Kylo's past includes his parents, Han and Leia, and Leia's the only one left living, so it makes sense that she's what he needs to kill so that he can answer Supreme Leader Snoke's call for him to use his power to become even stronger than before. It almost seemed like he hesitated when he killed Han, so there could still be an emotional connection left to his family — one that might be preventing him from using his power to the fullest.

Later in the trailer, we see Kylo with his finger on a detonator, his eyes full of tears, and the next shot is one of Leia looking supremely concerned. Could there be a chance that he's about to blow up a ship holding his own mother? There's so much emotion in those clips that that it's almost impossible to consider any other ending for her.

And then, there's Luke. In his exchanges with Rey in the trailer, he seems set in not leaving the place where he's been hiding out for all of this time, so if he's going to rejoin the rebels, something big and important is going to have to draw him back in. Could it be the death of his sister, or the threat of death from Kylo? It seems possible.

But even all of this evidence doesn't mean that Kylo will kill Leia. After all, this is only two and a half minutes of footage, and there's a good chance that the way Leia is written out of the series will be one of the most pivotal moments in the movie. It makes sense that producers would want the trailer to misdirect fans to the wrong conclusion about her death to keep them guessing.

Besides, there's still so much mystery about Kylo's relationship with his parents and what may have happened between them in the past. Until those blanks are filled in, it's hard to say whether or not he'd follow through with killing his own mother... and then there's the very important fact that we have no idea if Leia actually dies or not.

With just a little over two months left until The Last Jedi hits theaters, there's not too much time left before we finally have answers. Regardless of how she leaves the franchise, it goes without saying that more than a few tears will be shed when Leia's time comes to an end. What is Star Wars without our general?

More like this
Lego Just Announced Its 'Black Panther' Set Release Date
By Maxine Harrison
Margot Robbie Breaks Her Silence On *That* Viral 'Barbie' Moment
By Maxine Harrison
The Trailer For The Whitney Houston Biopic Has Twitter Feeling Heated
By Radhika Menon
Paul Mescal, Man Of Mystery
By Samantha Leach and Heather Hazzan
Get Even More From Bustle — Sign Up For The Newsletter