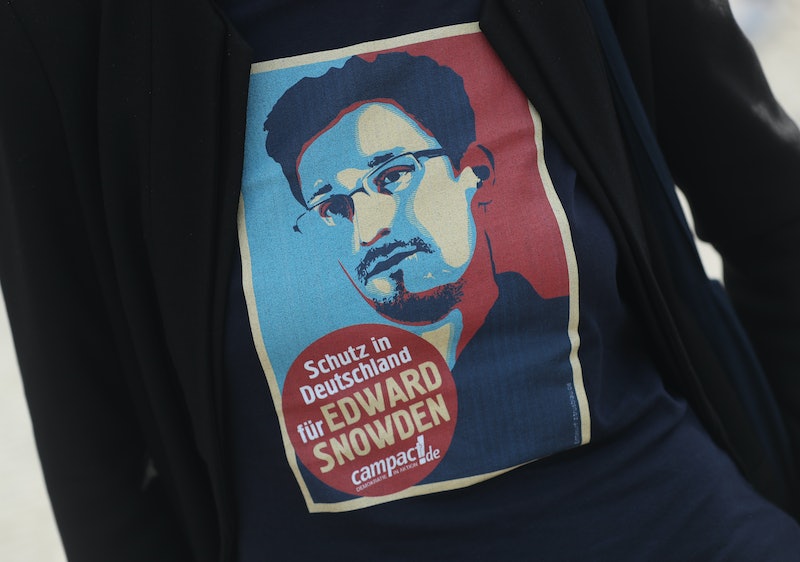 On Christmas, Edward Snowden’s girlfriend posted a picture of her and Snowden wearing Christmas hats, Snowden feeding her a piece of chicken. The infamous NSA leaker has been confined to Russia since 2013, when he released troves of classified information about the U.S. government’s surveillance programs to the press and then fled the country. This begs the question: Does Lindsey Mills live in Russia too, or was Snowden’s girlfriend just visiting him when that Christmas photo was taken?

She’s in Russia. Because Snowden is a wanted man, he won’t be able to return to America without being arrested. This means that practically, he’s confined to Russia for the indefinite future. Mills moved to Russia in 2014 to be with her partner.

Unlike Snowden, Mills isn’t wanted for any crime, so she’s free to travel wherever she pleases — and that’s just as well, given that she can’t live in Russia full-time due to visa restrictions, according to the New York Post. An acrobat and pole dancer, Mills frequently posts pictures of her travels on her blog.

Snowden was a contractor for the National Security Administration when, in 2013, he decided to leak information about government surveillance to the press. In doing so, he also decided to leave his entire life behind. That included Mills, his girlfriend of around four years at the time. The two were living together in Hawaii when Snowden flew to Hong Kong, then Russia, to escape American authorities.

In an interview for the documentary Citizenfour, Snowden explained that he told Mills he’d be going away for a few weeks, but didn’t say where.

“That is not an uncommon occurrence for someone who has spent the last decade working in the intelligence world,” he added.

Although Mills generally stays out of the spotlight, she did appear on stage during the Academy Awards in 2015 when Citizenfour won an Oscar. More recently, Mills was depicted by Shailene Woodley in the Oliver Stone film Snowden.

As of now, Snowden probably won’t be able to leave Russia anytime in the near future. He was confined to a Russian airport for over a month before the Russian government granted him limited asylum, but so far, no other countries have extended such an offer. In November, President Obama refused to pardon Snowden for his crimes, and there’s no reason to believe president-elect Donald Trump will do so once he's in office. Hopefully, Snowden and Mills enjoy Russia, because they won't be spending time elsewhere anytime soon.