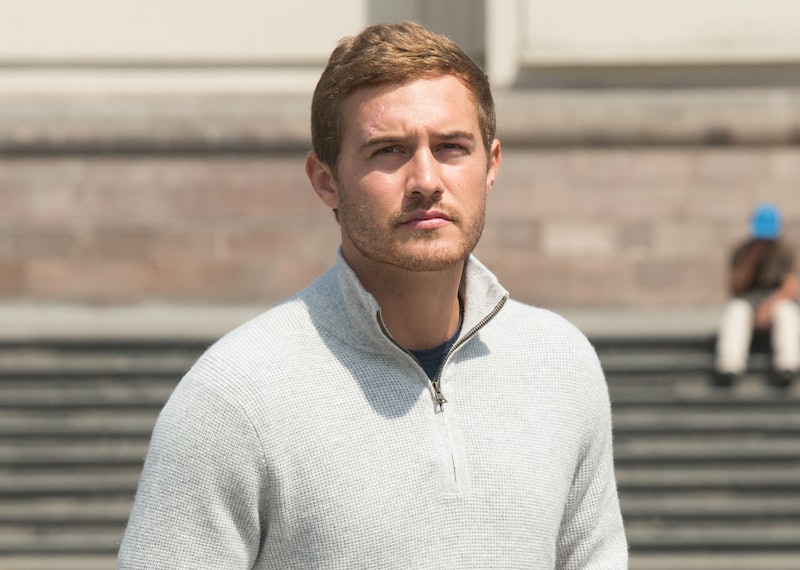 Peter Weber is entering into the Fantasy Suite dates admittedly in love with all three of his final women. That can make for a pretty major complication when it comes to proposal time, but then again, Peter may not be engaged after The Bachelor. In previews for the finale, it looks like Chris Harrison tells Peter that production learned a massive secret right before the Bachelor is about to propose. "I feel like I'm going to pass out right now," Peter replies. "That's just like the last thing I needed to hear." Of course, fans still don't know what that info was, how it affects the finale, or if it's even a big deal at all. Remember: The Bachelor likes to mess around with editing its trailers.

It might not be related, but Peter told The Hollywood Reporter how no one — not even Bachelor spoiler extraordinaire Reality Steve — could spoil his ending. "I'm really excited for this season because I'm very confident that no one is going to be able to spoil it," Peter said. "There's a reason I believe that — and obviously I can't say it, otherwise it gives it away." The most likely reason that Peter's ending is fail-safe regarding spoilers? It hasn't finished yet.

In an interview with People where he also confirmed that no one will be able to figure out his ending. Peter said he had expected to end up engaged. But he quickly followed that by saying he didn't pressure himself to propose. "When I decided to be the Bachelor, obviously, I envisioned at the end getting down on one knee and getting engaged to — to someone," Peter said. "Navigating the whole journey, I never made that an ultimatum where it had to happen that way and if it didn't, it was going to be a failure for me."

With the typical expectation of a Bachelor and Bachelorette season to end in a proposal, Peter's comments seem to be bracing the audience not to anticipate that. That's a nice change of pace for the franchise since many of the rushed engagements don't end up succeeding. Plus, if he did ask for more time after learning some game-changing information about the woman he wanted to propose to, there's a chance that an engagement could occur live during the After the Final Rose special or in filming that occurred post-production.

"I'm not sure how all this ends," Harrison says in the preview where he delivered the bombshell. And if Harrison doesn't know, Bachelor Nation has no hope. But Peter's interviews have established that his season most likely won't end with the standard Neil Lane-approved proposal, so prepare yourself accordingly.