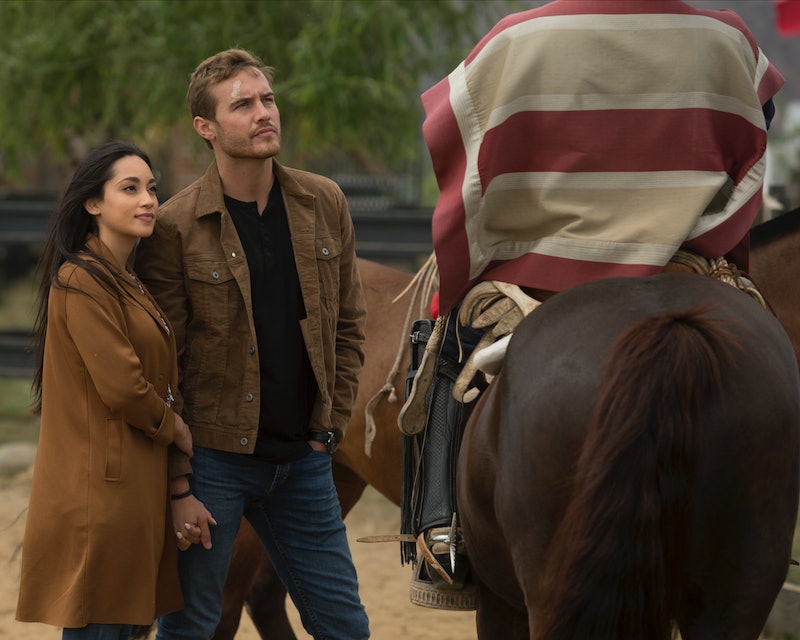 Peter's upcoming hometown date with Victoria F. is guaranteed to be full of drama — and some of it might come courtesy of someone from his past. After Merissa Pence, Peter's ex, revealed that she used to be friends with Victoria in an interview for Us Magazine, it seems like Peter's ex-girlfriend might crash Victoria F.'s hometown date on the upcoming Feb. 17 episode of The Bachelor. And if it is Pence, she's going to have a lot to say about the finalist competing for Peter's heart.

On Feb. 12, ABC released a promo teasing the shocking revelation of "Victoria's secret" during her hometown date with Peter that threatens to ruin their relationship for good. In the clip, a blonde woman — who is almost completely blurred out — calls Peter over to share some news about Victoria with him. "She brought some stuff to my attention that she thought I should know," Peter tells Victoria, before their dramatic confrontation kicks off when he asks for "the truth."

Based on Peter's reaction in the clip, it's clear that the mystery woman is someone that the pilot knows, and if she has something to share with him about Victoria's past, she's probably somewhat friendly with the controversial contestant. Pence, meanwhile, recently opened up about her relationship with both of them. And though she didn't confirm that she's the one who warns Peter on Victoria's hometown date, she didn't have any nice things to say about Victoria, which could be a major hint as to her involvement.

"We had a great relationship," Pence told the magazine about her five-month fling with the pilot, which took place back in 2012. "It was casual and I got to meet his parents and his brother ... We were friends for quite a while after [our breakup]." Their split was completely amicable, claimed Pence, but they lost touch due to new relationships and her decision to move back to her hometown of Virginia Beach, Virginia, which just so happens to be Victoria's hometown, too.

In her interview with Us, the boxing instructor explained that she saw a change in Victoria's behavior once she was cast on The Bachelor. "She just became a very self-centered person," Pence claimed. Once this season began airing, she says she was even more worried about Peter and Victoria forming a relationship, as she felt the brunette was putting on a "coy" act for the cameras. These quotes, in addition to Reality Steve's a spoiler-filled column that claimed Pence wanted to let her ex-boyfriend know that she had some reservations about Victoria, definitely makes it seem like Pence will be making an appearance on The Bachelor next week.

Neither Peter nor Victoria have publicly talked about their dramatic hometown date. However, back in November, Victoria addressed her dramatic tenure on the show in a lengthy Instagram post, adding that she will eventually share her side of the story. "The RUMORS you are hearing are FALSE," Victoria wrote at the time. "There will be a time & place where I can defend myself, but for now I choose to wait."

Fans will have to wait until Victoria's explosive hometown date to find out exactly what these rumors are — and to find out, once and for all, the identity of the mystery woman who wants to reveal Victoria's secret to Peter.