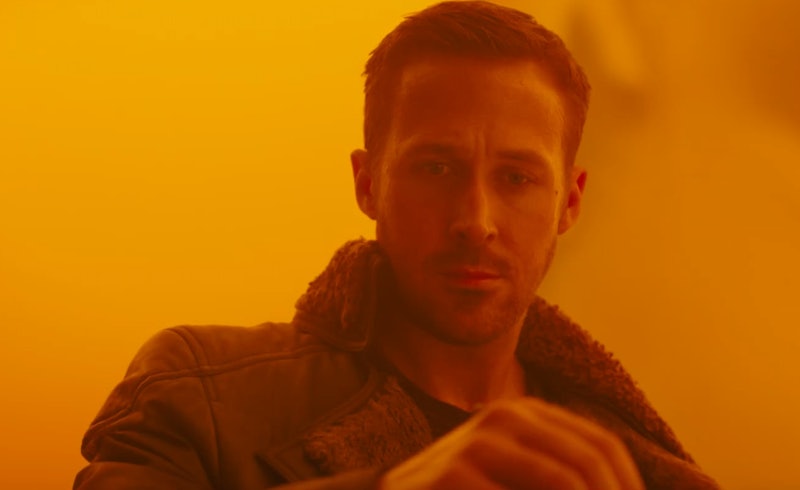 Blade Runner 2049 picks up where 1982's Blade Runner left off — only 30 years later, as the first film was set in 2019. Besides a time leap, the second installment has the same general idea of the first: Blade Runners, like Harrison Ford's character Rick Deckard, must track down and kill replicants. It sounds simple enough, but it's not at all, because Blade Runners are only trying to track down and "retire" replicants that have gone bad, and replicants are difficult to identify. Spoiler alert: Since in the new movie Ryan Gosling plays a replicant, does that mean that Ryan Gosling's character dies in Blade Runner 2049?

Fans of the original Blade Runner know that replicants are supposed to have lifespans of just four years, so the chances of him reaching the end of his life are high, and in fact (major spoilers ahead!) Gosling's character does die, but not because he naturally reached the end of his short life.

Gosling, who plays K, is an LAPD officer who teams up with Deckard to defeat the creator replicants, played by Jared Leto. It's a battle towards the end of the film that ends up killing Gosling's character, who throughout the movie is hinted at being more of a human than he might think. In a way, K's death is the greatest hint that he might actually be human, or at least closer to it than mots replicants, because he dies a noble death after fighting against evil. Earlier in 2049, he's told that dying for a good cause is the most human thing someone can do. It's a nice moment — or as nice as a protagonist's death can be — because K is allowed to feel fully human.

Perhaps the most intriguing aspect of K's death is that it's not 100 percent confirmed. It's definitely implied that he dies, the end of 2049 doesn't actually show him die. Gosling hinted at the potential that he might not have died in an interview with L.A. Times, when he said that he might be interested in being in a third Blade Runner. "If there was a story to tell that was worth telling and worth the effort that we were going to put into it, then sure. But I have yet to hear that story," Gosling said. Hmm, peculiar words for someone who was supposed to have died at the end of 2049.

It's worth noting that Gosling implied he might come back to Blade Runner in September before most people had seen the film, so he may have been simply maintaining an air of mystery and lead people on to believe he lives. That's the most likely scenario, because K's death appears imminent after he's injured in battle. And no, his being a replicant doesn't protect K from dying after being badly wounded since they're made of organic substance. Also, as we know from the blade runners' work in "retiring," or killing them, they're not the kind of androids that are impervious to death.

Because there's the slightest chance that Gosling's K lived through the long battle at the end of 2049, it leaves the door open for a third Blade Runner to pick up where it left off and either deny or confirm — GOT style — whether he lived. Regardless, the chance that a third Blade Runner will be made seems likely, as while it's a satisfactory return to the world of Blade Runners and replicants, 2049 doesn't exactly tie up all loose ends and answer every questions fans might have. Only time will tell if another film in the series ever will.

More like this
Margot Robbie Breaks Her Silence On *That* Viral 'Barbie' Moment
By Maxine Harrison
Lego Just Announced Its 'Black Panther' Set Release Date
By Maxine Harrison
Paul Mescal, Man Of Mystery
By Samantha Leach and Heather Hazzan
12 ’90s Movie References You Missed In 'Do Revenge'
By Radhika Menon
Get Even More From Bustle — Sign Up For The Newsletter