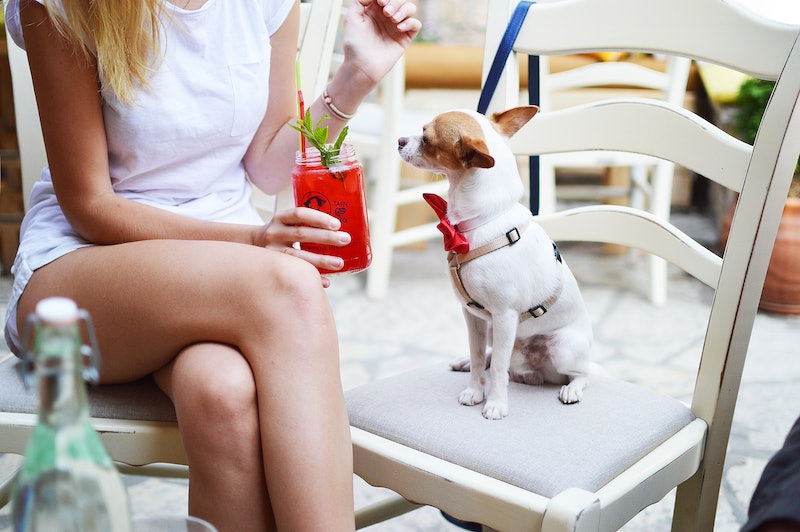 We live in a time where a dog or even a baby hippo can develop a cult following. So if you're wondering why another puppy story just went viral (AGAIN) while you struggle to get those "likes" on that selfie, don't worry. We humans never really had a chance against cute stories about animals with flagrant personalities and adorable outfits. A new study seems to indicate that the obsession is worse than we thought, because evidently, dog owners would rather snap a photo of their dog than their own partners.

Rover.com, a dog-sitter and dog walker company, recently released their Truth About Dog People report, which revealed a lot of what we already know. It shared that dog owners now care more about the well being and dignity of their pets than they have in years past. But the other results brought a whole new meaning to human's best friend. Twenty-four percent of people surveyed admitted that they make up songs to sing to their pets, and indeed confirmed that at least 29 percent of dog-owners surveyed love taking pictures of their pets — maybe a little more than posting your #WCW or #MCM. Sixty-five percent of dog owners admitted that they have more photos of their dogs than they do of their own partners; perhaps unsurprisingly, over half (54 percent) of people said that they would consider the future of their relationship if their pet didn't like their partner.

Even with this generation trying to navigate adulting, this hasn't stopped us from being pet owners. The report stated, "Young Americans are less likely to be homeowners or parents than previous generations, but one category they lead in, is pet ownership." So you could say, that instead of pining after the romantic fairytale, what many of us really want is loyal companionship.

It's also become a part of the culture in ways that normalize having your pup around. Not only have one in four people brought their dogs on a date, but almost half (47 percent) said that it would be more difficult to leave their pet for a weekend rather than their partner. And celebrating major holidays and events in your life or with your dog, like their birthday, is perfectly normal. The report stated that 78 percent of people want to include their dog in memorable moments like marriage proposals and vacations.

This all seems strange ... until it starts making sense. If this all sounds a lot like you, there is no shame in it. Ninety four percent of those surveyed by Rover.com consider their dog a part of the family, and that isn't to be taken lightly. Feeling loved and appreciated is a basic human need, but sometimes difficult to find outside of your family unit. At the end of the day, your dog knows what you look like when you wake up and maybe even supports you (in a very dog-owner way) when you've hit a rough patch without judgment. All we are missing is a hashtag to commemorate the dog-owner duo love in response to a generation that may not be dating in a traditional sense, and would rather chill out with a dog instead.