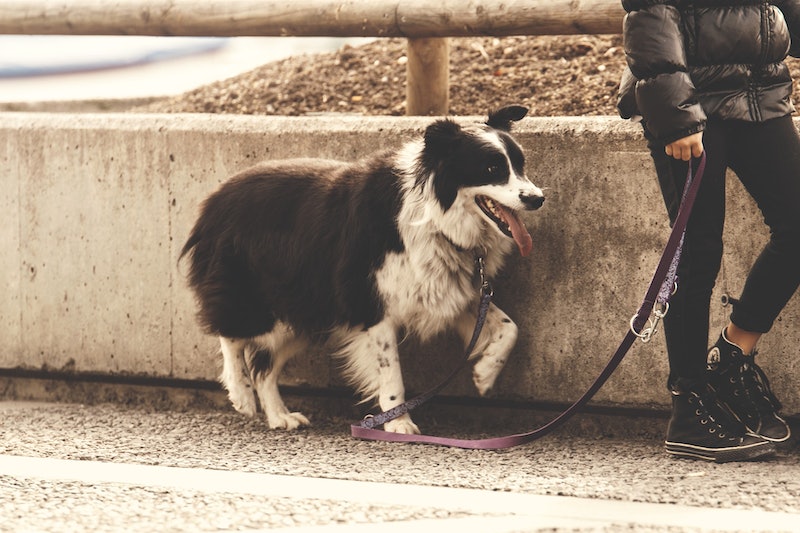 Here's an experiment. Next time you're at a party, play "spot the dog person." Chances are you'll find them capering around at the center of a growing crowd — unless they're cooing over Lassie in the corner. Humans get along so well with their furry BFFs because they have something unexpected in common with dogs: an affable nature. To be fair, the details vary; most humans don't sniff each other's butts upon first meeting. However, new research has suggested that the two species share an underlying genetic basis for being so darn friendly. In fact, mutations of these genes might be the reason dogs were domesticated in the first place.

In a study published in Science Advances this month, researchers studied a group of 18 domestic dogs and 10 wolves, both of whom had been raised around humans. After sequencing a portion of their genes and comparing their behaviors, scientists turned up a few interesting findings. First, dogs are far friendlier than wolves toward humans. Even when the person in question was a stranger, dogs interacted with humans much longer than wolves did, and they were more likely to look to humans for help solving puzzles. Say it with me: Awwwww.

Second, researchers were able to identify some genetic differences that appeared to correlate with sociability. Disruptions in two genes in particular, GTF2I and GTF2IRD1, were associated with dogs' friendliness. This supported previous research from the study authors linking hypersociability in dogs with their genetic code. Unaffiliated research has shown that GTF21 plays a role in hypersociability in mice, too.

That's cool enough on its own, but the most interesting part is yet to come. The same genes mentioned above are also associated with Williams-Beuren syndrome, a developmental disorder in humans. According to the National Institutes of Health, people with this disorder are incredibly outgoing and "tend to take an extreme interest in other people." Sound familiar?

The study's authors have been careful to explain that they haven't found a single sociability gene. For one thing, the research focused on a relatively small group of dogs and wolves; larger, more diverse studies are needed before any wider conclusions can be drawn. For another, genes interact with each other in complicated ways, so it's difficult to point to a specific gene and declare it responsible for something as wide-ranging as social behavior.

There's also the question of environment in the domestication of dogs. Did they evolve to be friendly after humans started using them for hunting, or did friendly wolves approach humans first? The current study appears to support the latter, but there's evidence for both possibilities. The only certain truth is that dogs are indeed descended from ancient wolves. That's right -- regal wolves share an ancestor with fluffy, slobbering corgis who depend on humans to pick up their poop. It's a tough life, but some dog's got to do it.