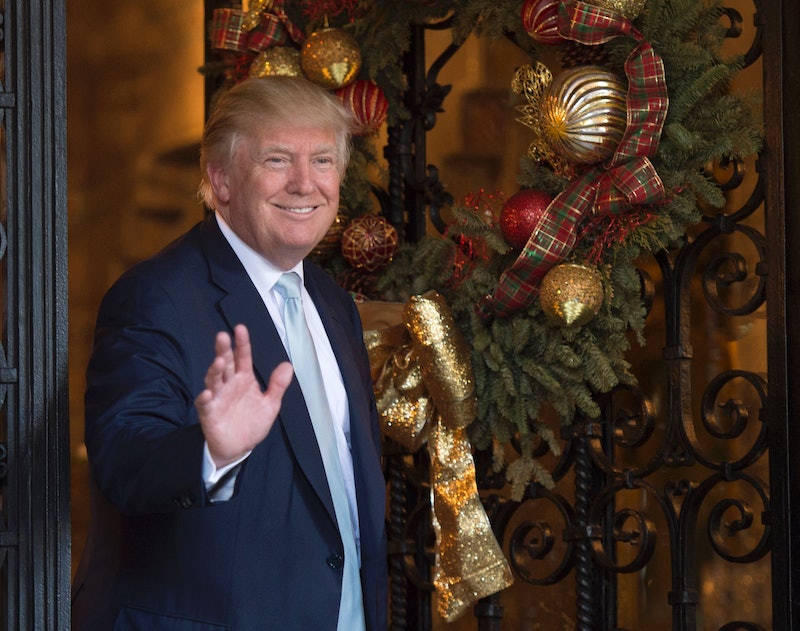 During his blustery and unconventional campaign, it seemed like Donald Trump spent most of his time on camera addressing crowds, giving interviews, and taking center stage at numerous debates. Since his victory on Nov. 8, however, he has remained relatively quiet — I'm putting emphasis on the "relatively" part, considering he continues to tweet and put out statements. Nonetheless, President-elect Trump will hold his next news conference on Jan. 11, and it's about time he made the announcement.

Trump announced his upcoming news conference on Twitter on Tuesday evening, calling the event a "general news conference." It will apparently be held in New York City. He had previously planned to hold a news conference in December, but needless to say, it was postponed.

According to Fox News, Trump's last formal news conference was held on July 27. At that time, he had landed the Republican presidential nomination, but still had months to go before the November election. Now he's on his way to the White House, and many unanswered questions remain. On Tuesday, Trump's tweet did not specify the topic of the conference, but his use of the word "general" seems to suggest that he could cover a wide — or disappointingly narrow — range of topics.

One such topic could be the future of his businesses. For months, Americans have wondered how Trump will walk the fine line between businessman and U.S. president, steering clear of any conflicts of interest. He has mentioned a blind trust, his children, and other solutions for his businesses, but he hasn't delivered a finalized plan. In fact, that was set to be the topic of his December news conference until it was postponed. It would make sense for a plan to come at next week's conference, prior to his inauguration.

Another topic on the agenda could be Trump's controversial Cabinet choices. Since winning the general election, Trump has nominated several unexpected and unpopular figures to the executive branch. Among the most controversial picks are incoming chief strategist Steve Bannon, formerly of Breitbart, and proposed attorney general Jeff Sessions, a senator from Alabama. Other than issuing prepared statements and a handful of tweets, Trump hasn't much answered for his Cabinet choices during the transition period.

That transition has likely kept Trump and his team busy since November. As he prepares to take office, though, Americans may be more anxious than ever to hear what he's thinking and what he's doing. With any luck, the long overdue news conference will clear up some of those inquiries.