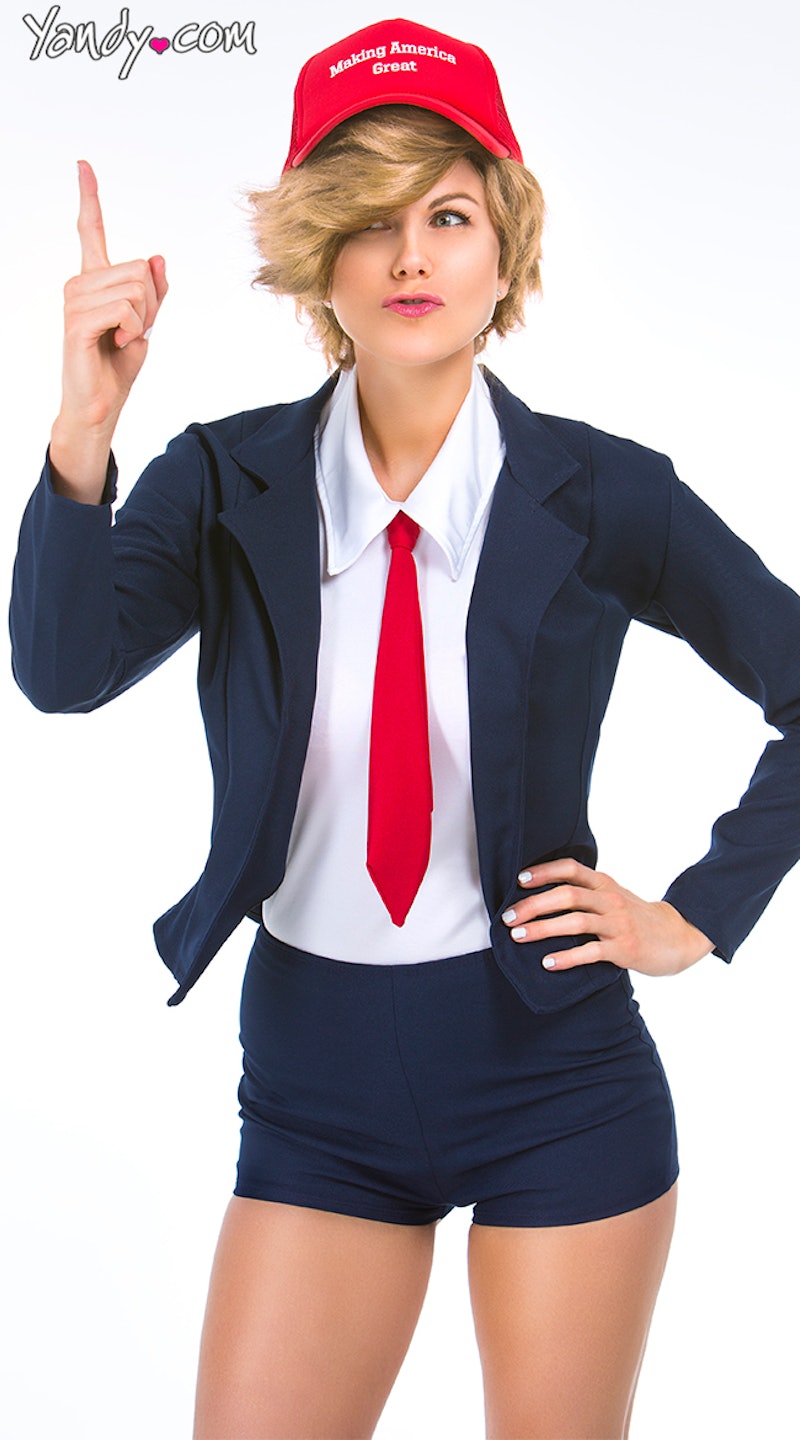 Halloween is just a few more planning weeks away, and a lot of us are desperately trying to come up with the most funny/creative/timely costume possible. If I had to guess, most Halloween parties will feature at least 12 witches, seven cats, three Blade Runners, and one person who is "ironically" Ken Bone but actually they paid good money for that red Izod sweater and want to get good use of it. There will, also, inevitably be one or two Donald Trump costumes. The wearers will do their best impersonations of Alec Baldwin impersonating Donald Trump, and while a few people might laugh, the truth is that dressing up like Donald Trump for Halloween isn't funny, because Donald Trump isn't funny.

Donald Trump is a man who has bragged about assaulting women, who has called Mexicans "rapists," and has failed to firmly denounce white supremacist groups. He has railed against freedom of the press, called for a ban on people from majority-Muslim countries from entering the U.S., and has needlessly escalated tensions with North Korea to the point that nuclear war is a real thing we talk about in our (not fake) news cycle. So yes, he may have absurdly long ties, a bad fake tan, and a peculiar hairstyle, but no, Donald Trump is not funny. (And same goes for any Trump-adjacent characters, too.)

So before you drop $59.99 on that "Donna T. Rumpshaker" costume, consider the following:

Because of Donald Trump calling on Congress to end DACA (Deferred Action for Childhood Arrivals), nearly 700,000 young people who were brought to the U.S. as children, are living in fear that they made be deported from the country they call home.

Because of Donald Trump's repeal of the Obamacare-era birth control mandate, hundreds of thousands of women are at risk of losing access to affordable contraceptives.

Because of Donald Trump's transgender military ban, thousands of men and women in uniform are unsure of whether they will be allowed to continue to serve their country.

Putting on a Donald Trump or "Donna T. Rumpshaker" costume belittles the real fear and uncertainty all of these people feel about their futures, their health, and their safety, by turning it into a cheap party joke.

Maybe you think that wearing a Donald Trump costume is a way of undermining him, of ridiculing him. The thing is though, wearing a Donald Trump costume plays into exactly what helped Trump rise to power in the first place. What you may mock about Trump are the very things his supporters love most about him, and which helped him get elected to the White House in the first place. Wearing a Trump costume doesn't undermine this brand, it strengthens it and normalizes it.

Halloween is meant to be scary, and there's a definite argument to be made that Donald Trump is one of the scariest people alive today. But Halloween is meant to be "Boo!" scary, not existentially scary; to make fun of those things that go bump in the night. After all, there's a big difference between going through a haunted house, or seeing someone in a hyperrealistic zombie costume, and the very real possibility of being deported from the country you grew up in, or fired from your job because of your gender with no legal recourse. To the most vulnerable communities in the U.S., to people who are low-income, to women, to LGBTQ folks, to people of color, Donald Trump is not a joke. A Donald Trump costume is not funny, because Donald Trump is not a punchline. He is a threat. Don't dress up as him for Halloween, please.