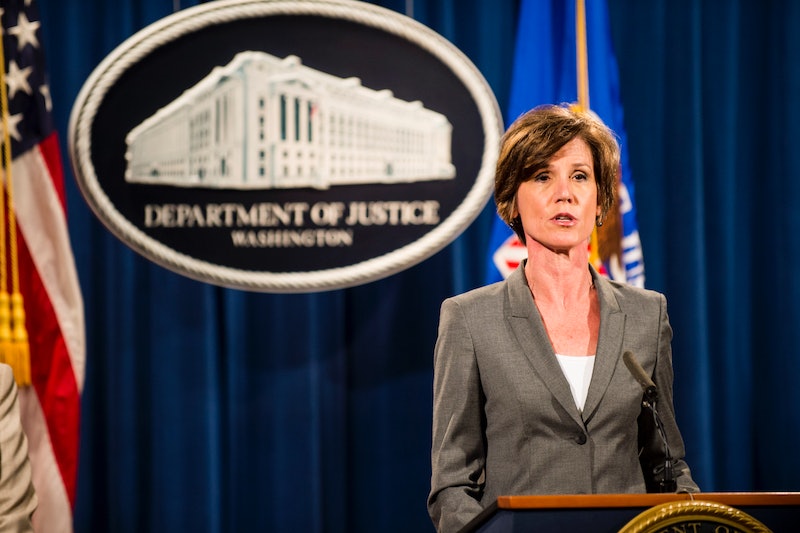 Only shortly after the acting attorney general wrote a letter announcing that she would not defend the executive order banning refugees and immigrants, Donald Trump fired Sally Yates from the Justice Department. Yates' letter stated that she felt it was the department's responsibility to ensure that the order was legal, and because she wasn't convinced it was lawful, she would not defend it.

That apparently got under Trump's skin. It was just a few hours later that Press Secretary Sean Spicer wrote on Twitter that Yates had been "relieved." Trump has named Dana Boente, a U.S. attorney for the Eastern District of Virginia as acting Attorney General, Spicer said. According to The New York Times, Trump felt Yates had "betrayed" the administration. The letter from Yates, along with pondering its legality, also questioned it as a whole. The Office of Legal Counsel's review of the order, Yates wrote, "does not address whether any policy choice embodied in an Executive Order is wise or just."

Trump responded with a statement on Facebook, writing, "The acting Attorney General, Sally Yates, has betrayed the Department of Justice by refusing to enforce a legal order designed to protect the citizens of the United States. This order was approved as to form and legality by the Department of Justice Office of Legal Counsel. Ms. Yates is an Obama Administration appointee who is weak on borders and very weak on illegal immigration."

Trump had earlier complained about Yates on, of course, Twitter, stating that the reason he still had an Obama-era attorney general was because "Democrats are delaying my cabinet picks for purely political reasons." In fact, the White House released a whole statement solely on the claim that Democrats are obstructing his nominees.

Currently awaiting confirmation to the attorney general position is Sen. Jeff Sessions, who was once denied a federal judge position because of allegations of racism. Members of Congress have expressed concerns about his nomination and what it would mean for him to be leading the Department of Justice, of all things. Boente will serve as the acting attorney general assumably until (if) Sessions is confirmed.