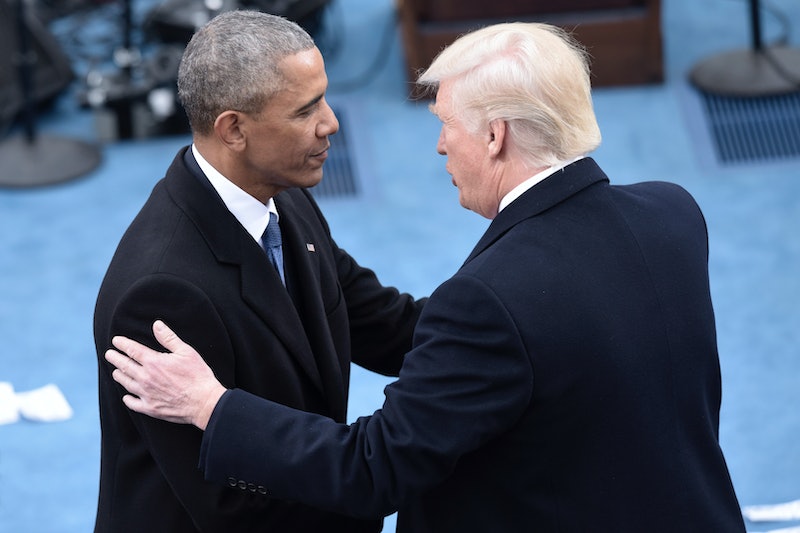 The inauguration is over, and new President Donald Trump has taken over the @POTUS handle on Twitter. And quickly, people noticed something strange about Trump's Twitter cover photo: it was from Obama's inauguration.

Of course, it was pretty obvious that someone on Trump's team had used an image featuring attendees of Obama's 2009 inauguration. The photo was quietly replaced by that of an American flag, and then by one of Trump gazing through a window, but not before Twitter users jumped on the Trump team's mistake.

Some pointed out similarities, though to a lesser extent, between Trump's Twitter account using Obama's inauguration photo and First Lady Melania Trump's 2016 plagiarism incident, during which her speech closely resembled one given by former First Lady Michelle Obama in 2008. (Campaign chairman Paul Manafort at the time denied the accusations of plagiarism, telling CNN that "To think that she'd be cribbing Michelle Obama's words is crazy.")

And while his wife, Melania, has taken over the @FLOTUS Twitter handle, she took a while to publish her first tweet. Actually, Melania hasn't tweeted since November 2016, even on her other Twitter handle, @MELANIATRUMP.

The Donald has already had to make some changes to his tweeting routine; the new president reportedly had to swap his Samsung Galaxy phone with one approved by the Secret Service. Hopefully Trump and his team have learned their lesson and won't make a similar mistake by appropriating another president's photo again.

And we can only hope that as president, Trump will use a less inflammatory style when tweeting from @POTUS, you know, since he's acting as a representative of the United States on an international scale and all that.