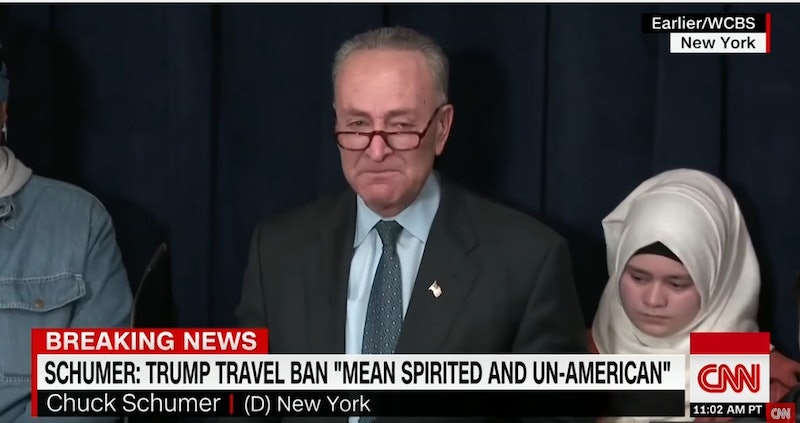 Donald Trump's Twitter responses to the uproar over his refugee ban have been disjointed and somewhat nonsensical, but that's no surprise. But perhaps worst among all of them was his claim that Sen. Chuck Schumer's tears during a press conference had caused problems at airports. Sen. Schumer's tears, I'd argue, are actually a lot less problematic than the toxic masculinity that led Trump to make fun of him.

Trump's tweets about the refugee ban are typically blustery and hyperbolic — if you can find them among all of his other rambling about how unfair the media is and how senators Lindsey Graham and John McCain are trying to start World War III. Schumer, on the other hand, started with a strong message and hasn't yet left it. He teared up at a press conference in which he called the ban "un-American" on Sunday.

"There are tears running down the Statue of Liberty tonight," Schumer posted the evening that the ban went into effect, along with a picture of Lady Liberty herself. According to his Twitter feed, he then spent the weekend helping refugees in whatever way he could.

"I noticed Chuck Schumer yesterday with fake tears. I'm going to ask him who is his acting coach, because I know him very well. I don't see him as a crier. If he is, he's a different man. There's about a 5 percent chance that it was real, but I think they were fake tears," Trump said in an Oval Office meeting open to the public Monday morning.

Of all of the myriad criticisms of the ban, why did Trump choose to make fun of Sen. Schumer in what he probably thought was a hilariously pithy way? My guess is that he saw it as a weakness. A man who expresses sadness over the plight of other humans probably emasculates himself in Trump's world, where Sen. Schumer's comments are worth making fun of, but talk of grabbing women by the pussy is just locker room banter.

Trump has couched this whole refugee ban in the language of protection, using slogans like "Make America Safe Again" (I won't torture you with his use of all caps there) and saying that the "administration will ALWAYS have your back."

Moving beyond the obvious fact that there are clearly many people whose backs this administration does not have, it's an extremely paternalistic way to approach things. Let the Trump administration decide how you need to be kept safe — and ignore or belittle all attempts to point out the faults with the administration's actions. Emotional appeals like Sen. Schumer's try to focus the president on the true human cost of his actions, which he is apparently unwilling to see. And the fact that an emotional appeal is coming from a man? That's even worse — and so Trump singled it out for ridicule.

It was an altogether terrible thing when Trump's toxic masculinity led to thousands of women in the U.S. feeling traumatized by his election to the presidency. It's sunk to a new level, now that it's led to the signing of an executive order that could amount to a death warrant for thousands of vulnerable men, women, and children from around the world. We can only hope that Sen. Schumer's appeal, and the appeals of those aligned with him, will soon become louder than the president's blustering.