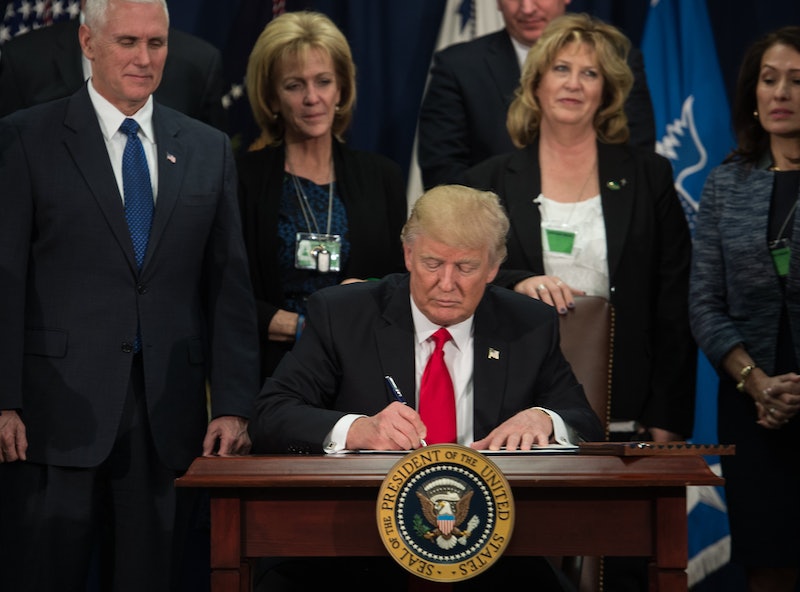 Donald Trump signed an executive order on Wednesday threatening to strip federal funding for sanctuary cities. The order includes a horrifying plan for the Department of Homeland Security to publish a weekly newsletter listing crimes committed in sanctuary cities by "aliens." Veiled as an action in the interest of public safety, the newsletter would essentially attempt to shame these cities into complying with federal immigration law. And by focusing on the alleged crimes of those the administration deems foreigners, the newsletter will unfairly give the impression that those are the only people committing crimes in the U.S. today.

And as scary as this "comprehensive list of criminal actions committed by aliens" is, it's not the first time Trump has used public shaming to scapegoat marginalized people for the country's crime rate. Back in 1989, Trump took out full-page ads in four of New York City's biggest newspapers at the time calling for the state-sanctioned killings of five innocent black and Latino teenagers in the "Central Park 5" case.

The group of boys, ages 14 to 16, were charged with assaulting and raping a young woman who was jogging through Central Park. Each was interrogated by police for hours without a parent or lawyer present before they eventually confessed to assaulting the woman, despite not committing the crime. They were sent to jail where they spent the next six to 13 years of their lives.

Meanwhile, the actual perpetrator of the crime went on to commit more rapes and murder. He was serving a life sentence in prison when DNA evidence linked him to the crime in 2002 and exonerated the innocent Central Park 5.

Trump's part in all this was stoking public opinion against the boys before their trials began. In the full-page ad that ran in the Daily News, the New York Post, New York Newsday and The New York Times, Trump wrote of "muggers and murderers" in the city:

They should be forced to suffer and, when they kill, they should be executed for their crimes. They must serve as examples so that others will think long and hard before committing a crime or an act of violence. ... I want them to be afraid.

He began the letter with rhetoric similar to that which he uses today:

Back then, Trump did not have all the facts, but still used five young people of color to represent the crime problem in New York City. The same could happen today nationally, as the new weekly newsletter he has ordered to focus on the crimes committed by "aliens" will likely feature most, if not all, people of color. And as Press Secretary Sean Spicer proved in his first press conference, the administration's bar for fact-checking is extremely low. If Trump and his administration refuse to give us accurate numbers on things as basic as voter fraud and inauguration crowd sizes, how can we trust the numbers in this crime report? That doesn't bode well for a newsletter that will ultimately be putting people's reputations and lives at risk.

And with this newsletter fanning the flames of xenophobia, immigrants in the U.S. will most certainly be "forced to suffer," living in the type of fear Trump once wished upon a group of high schoolers who had done nothing wrong. And if you think Trump learned from his past misstep, think again. As the Central Park 5 were being exonerated, Trump refused to apologize for the ads, telling The New York Times, "They confessed. Now they say they didn't do it. Who am I supposed to believe?"

If his 1989 ads are any indication of what this newsletter will be, Americans will have to step up in a major way to fight misinformation that threatens immigrants, refugees, and anyone else that can be considered an "alien." There are many lessons to be learned from the case of the Central Park 5, and one of those is that scapegoating marginalized people doesn't solve any problems. It just exacerbates them.