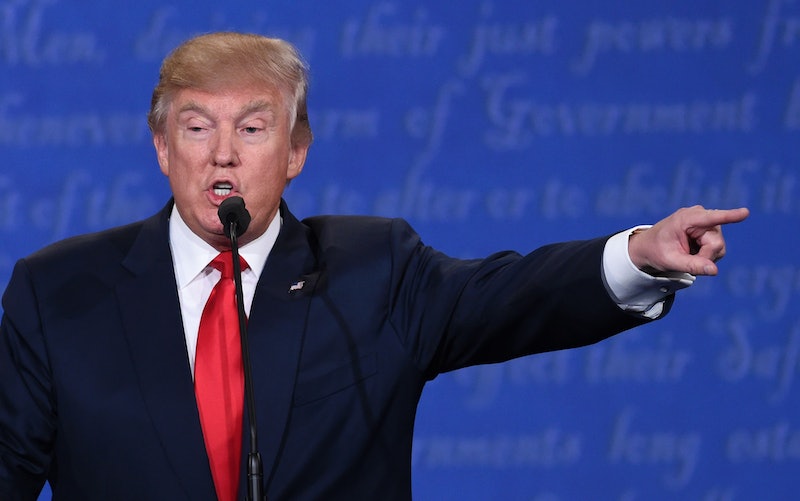 President-elect Donald Trump took to Twitter early Friday morning to share his thoughts on some of his favorite targets — the "dishonest" media, Hillary Clinton, and the Democratic Party. But he also added one new subject to his blacklist: the new host of Celebrity Apprentice, Arnold Schwarzenegger. These latest seemingly petty tweets aimed at protecting the president-elect's ego are leading many to ask, "What is Trump trying to distract from this time?"

In a two-part tweet, Trump highlighted that ratings for the former governor of California's season of the reality TV show didn't match up those of the last and first seasons of Celebrity Apprentice, which the president-elect himself hosted.

Ignoring the fact that he is the executive producer of Celebrity Apprentice, Trump seemed to take glee in Schwarzenegger's apparent failure, writing, "So much for.... being a movie star," and then ironically adding, "But who cares."

Apparently, Trump wasn't watching Thursday night when, in an interview with PBS NewsHour, Vice President Joe Biden advised the soon-to-be president, "Grow up, Donald. Grow up. Time to be an adult. You're president."

In fact, it's pretty likely that Trump missed the program. According to a Washington Post report from early December that analyzed his tweets from the beginning of his presidential campaign, most of Trump's TV-watching time is spent on Fox News. NBC, which airs Celebrity Apprentice, comes in fourth on that list, while PBS is all the way down at the 10th spot.

And similar to Trump's previous Hamilton Twitter rant, people are wondering if his latest trivial tweets have an evasive intent. Is he trying to draw attention away from today's intel briefing on Russian interference in the election? Or, despite his tweeted reassurance otherwise, is Trump trying to distract from CNN's recent report that American taxpayers will paying for the proposed wall on the U.S.-Mexico border?

Just how calculated or not Trump's tweets are is up for debate. And no matter how he may or may not be trying to distract from the issues of the day, news outlets are well-equipped to report on both the president-elect's social media habits and the state of national security simultaneously.

Still, even though Trump's tweeting style hasn't changed from his days as a regular citizen to now, the public's interpretation of it has. And with good cause. With the former reality TV star about to take on the most important job in the country, everything he puts out there, even his pettiest tweets, calls for some level of deeper scrutiny.