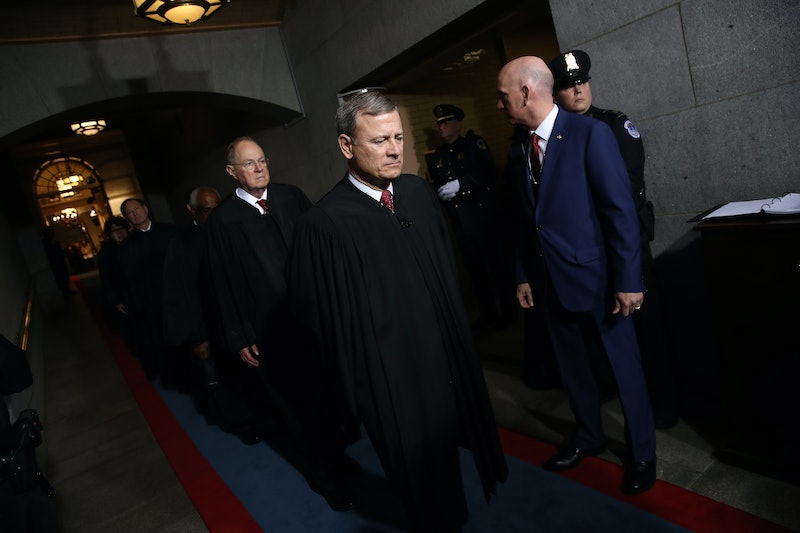 Donald Trump entered the presidency with the rare pleasure of already having a vacancy on the Supreme Court. Now, right from the beginning, he'll get to extend his legacy far past the end of his tenure — that is, if Democrats let it happen. There are now two possible Donald Trump Supreme Court picks, and liberals won't exactly be happy with either one — but that's to be expected at this point.

You can basically take it as a given that any president will want to nominate Supreme Court justices who are young and in line with his or her politics. Trump's politics may have been pretty unclear in the past, but on this front he went full conservative, taking a short list put together entirely by two different conservative organizations, the Federalist Society and the Heritage Foundation. His expressed goal was to pick someone who would be as similar to deceased Justice Antonin Scalia as possible, and to that end he and his team have reportedly narrowed an original list of 21 down to two. Someone even did a "Scalia-ness" study, trying to figure out which of Trump's potential picks would be most like Scalia.

The two men in question are both middle-aged white federal appeals court judges — Neil Gorsuch, 49, and Thomas Hardiman, 51. There was until very recently a third middle-aged white man in the mix, William Pryor, 54, but CBS News reports that he's been ruled out over concerns that he could draw pushback from both the left and the religious right.

To liberals around the country and Senate Democrats in particular, though, the two potential nominees look pretty similar. "It's hard for me to imagine a nominee that Donald Trump would choose that would get Republican support that we could support," Senate Minority Leader Chuck Schumer said. This shouldn't be at all surprising to Senate Republicans, who refused to bring President Barack Obama's nominee, Merrick Garland, up for a vote for almost a year.

Senate Majority Leader Mitch McConnell, unsurprisingly, is acting shocked that the Democrats would consider using the same tactic as he used to block Garland. Gorsuch and Hardiman are both certainly qualified, and it must be said that they could be more extreme in their positions — but that's not saying much. "Those of us who believe that Merrick Garland was improperly denied a vote and also recognize that the majority of the American people voted for Hillary Clinton are going to refuse a nominee who moves the court in such a right wing direction," said Caroline Frederickson, speaking on behalf of the American Constitution Society. At the very least, the two opposing sides are setting up for what is sure to be spirited debate about Trump's pick for Scalia's successor.