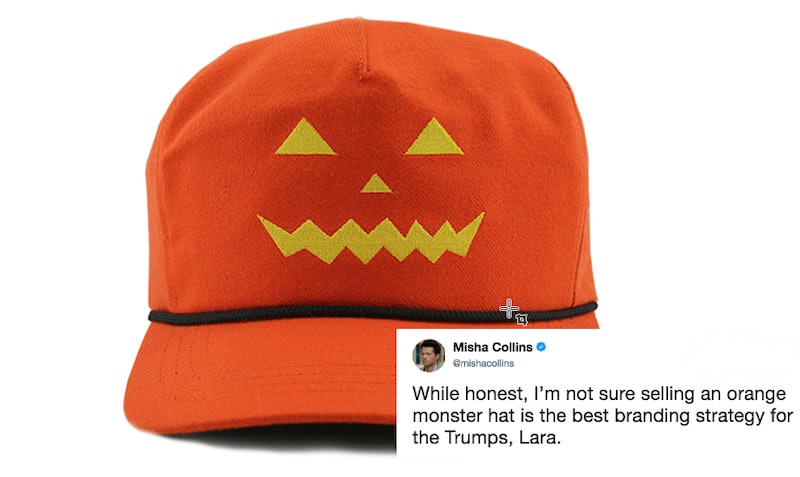 These spooky Make America Great Again hats may look like they're straight from the Halloween pumpkin patch, but they're not the scariest thing President Donald J. Trump has ever created. Just look at his policies to be scared straight. Regardless, Trump is selling Halloween pumpkin Make America Great Again hats because pumpkin spice rules everything in fall.

Trump's limited edition pumpkin MAGA baseball caps are bright orange with a yellow Jack-o-Lantern design on the front. The hats are adjustable snapbacks, and include the president's infamous campaign slogan embroidered in black on the back.

Many critics of the 45th POTUS have long poked fun at his orange-y skin tone, which makes these hats both eyebrow-raising and comical. But the comparison is probably not intentional, given Trump's history.

Trump has shown himself to be extremely sensitive to criticism, often clapping back at those who express their dissent with his opinions and policies. So while the hats may appear self-referencing, it's highly doubtful that the caps are Trump's way of displaying a self-deprecating humor.

Unfortunately, if you were hoping to nab one of the hats to wear as part of your Halloween costume (how spooky!), you are firmly out of luck. The caps, which cost $45, are already sold out on Trump's website. There is no news about a potential restock either.

Of course Twitter is experiencing all of the feels regarding this Halloween-themed MAGA cap, which was modeled by Trump's daughter-in-law Lara on social media. After looking at the hat, everyone turned in to a comedian.

The cap sparked an immediate and impassioned response — and users did not hold back. Trump critics ultimately roasted the president and his family with their comments on the silly Halloween hat.

That said, the Internet is generally a house divided over anything and everything. And that probably applies to this interesting hat, as it was quickly scooped up by supporters. So among the dissent, there are still folks willing to pay $45 dollars for a Trump pumpkin hat.

The irony of the citrus-y hue of the hats was not lost on these users.

The Twitterverse most certainly pounced with its savage reactions to these seasonal Make America Great Again hats.

This user makes a great point about brand. Are the Trumps really turning a corner and developing a more light-hearted self-awareness?

Eh, probably not. They don't seem like the type.

Halloween is canceled for some, due to these questionable caps.

Twitter users had all of the complicated feels and all of the ruthless jokes. Perhaps the marketing and branding folks behind the pumpkin MAGA hats should have named them "Trump-o-Lanterns." Now there's an idea.

This user expressed palpable disgust over the price, since nearly $50 does seem exorbitant for a seasonal baseball cap. But, hey, he's the president.

Zing! This user took a shot at the POTUS, referencing his recent draft-dodging headlines, in which he blamed bone spurs for deferring enlistment and ultimately avoiding military service. Now that's harsh.

This tweet pretty much sums up what millions of people are thinking once realizing a MAGA Halloween hat exists.

But it wasn't all jokes. Many users questioned how these hats were paid for, and how much the Trump family is profiting off of them.

They may look silly, but these hats lead to some serious questions.

These pumpkin MAGA hats were hardly just a simple and fun fashion item to celebrate the majesty of the Hallloween season. They truly ruffled the Internet's feathers — and tickled its funny bone.