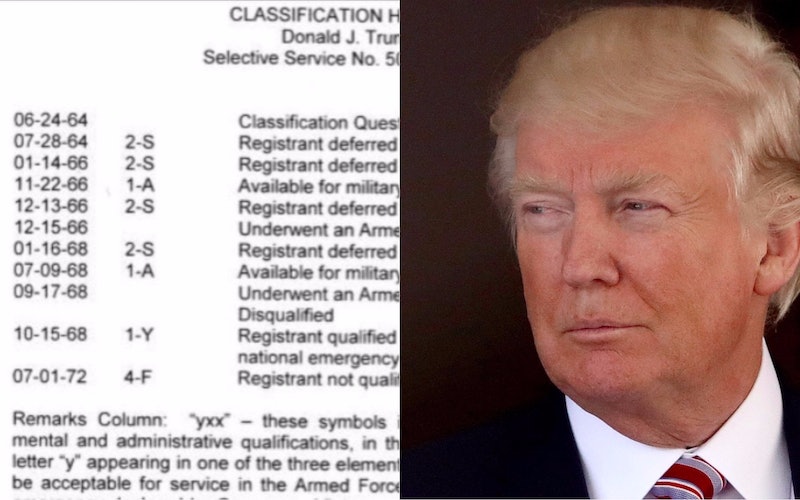 In the wake of this morning's transgender military ban, Donald Trump's deferment documents from the Vietnam War are making the rounds on Twitter. His own conflicting stories about his health, plus comments he's made about veterans in the past, have many shedding light on his relationship to the military.

It was a sad morning indeed, as POTUS announced via Twitter (in between trashing Democrats and obsessing over Hillary Clinton, obviously) that transgender people will not be allowed to be a part of the military in any way, shape, or form. In a series of tweets, he wrote, "After consultation with my Generals and military experts, please be advised that the United States Government will not accept or allow transgender individuals to serve in any capacity in the U.S. Military. Our military must be focused on decisive and overwhelming victory and cannot be burdened with the tremendous medical costs and disruption that transgender in the military would entail. Thank you."

The announcement is an obvious step back, reversing the policy that was approved by the Defense Department under President Obama that would allow transgender people to serve — a policy that was still under final review.

It's only fitting to shed light on his deferment documents once again, reminding everyone that this is the same person who was deferred from serving in the Vietnam War five times.

Four of the deferments were because of college, while one was due to a bone spurs in his heel — something Trump himself doesn't seem to fully remember. In a recent interview with the New York Times, for instance, he said the bone spurs were "temporary," "minor," and had no real impact on him. Yet he's also said that the bone spurs made it difficult for him to walk "long-term." In other instances, he's declared that he's in perfect health, and his longtime physician stated Trump has had "no significant medical problems" in over 40 years. They both seem to have forgotten that one problem supposedly so detrimental that it kept him from serving.

Simultaneously, Trump has said that it was ultimately getting lucky with a high draft lottery number that kept him from the war. However, he had already been deferred for medical reasons for over a year when the draft lottery started, making the lottery irrelevant for him.

Then, oh yes, there are the comments he made regarding Senator John McCain — a prisoner of war during Vietnam. He said that McCain was not a war hero, and that Trump liked "people who weren't captured." And let's not forget the audio clip from the '90s in which Trump told radio host Howard Stern that avoiding STDs while dating is his "personal Vietnam."

Our president, ladies and gentlemen.

The official reinstatement of the trans military ban is just the latest in a series of moves that undoes some of the progress the LGBTQ community has made in recent years.

To make matters worse, Trump's reasoning for reinstating the ban doesn't even stand on solid ground, not unlike countless other arguments he's made. The "tremendous medical costs" he spoke of? Inaccurate. The Defense Department commissioned a 2016 Rand Corp. study, which found that allowing transgender people to serve has a "minimal" impact on military readiness and health care costs, mainly because there are so few transgender people serving — somewhere between 1,320 and 6,630 in a military of 1.3 million. Including gender confirmation surgeries (very rare) and hormone treatments, we're talking about a cost somewhere between $2.4 million and $8.4 million — pocket change when you consider total health care costs and military spending. To put this in perspective, this equates to an approximate 0.04-0.13 percent increase in spending. Reminder: Trump proposed a 10 percent increase in overall military spending.

It's no secret that "Trump" and "equality" don't belong in the same sentence. (Unless the sentence is "Trump wouldn't know equality if it bit him in the ass.") This unfortunately rings true even when we're talking about people willing to put their lives on the line for the sake of their country.

We already know that he doesn't deem women equally capable in combat, as evidenced by what he said during the December 6 edition of Face the Nation: "You know, I mean, you're in there and you're fighting and you're sitting next to a woman. I mean, now, they want to be politically correct, they want to do it, but there are major problems. And as you know, there are many people that think this shouldn't be done, at a high level, and a level of general."

There have been endless fears that Trump in the White House could mean a harder barrier to entry for women, LGBTQ people, and other minority groups. The latest news of the military ban for transgender people doesn't do anything to help extinguish those fears. Rejecting transgender people from the military does nothing but further stigmatize them as a community, and it all comes down to two things: ignorance and fear.