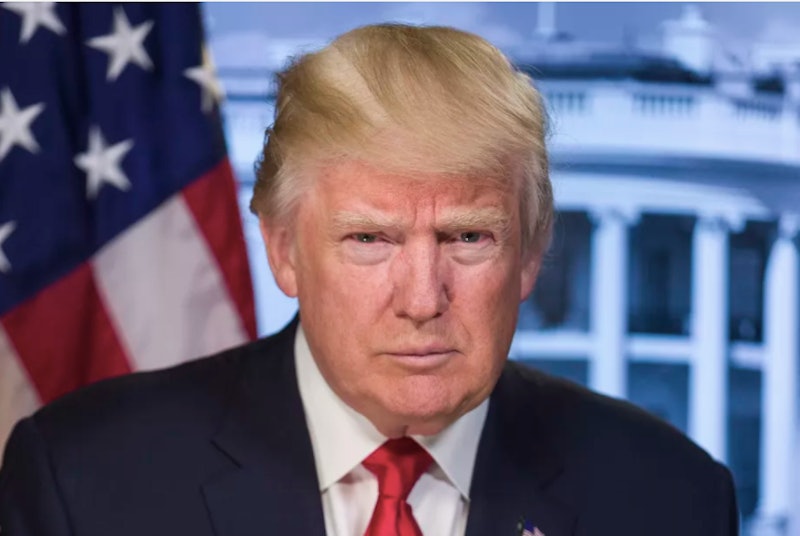 Of all the things to be scared of regarding Donald Trump's presidency, his official presidential picture is surprisingly close to the top of the list. Besides the immediate and visceral flashbacks to The Picture of Dorian Gray, Trump's picture is a troubling symbol for all the social division that led to his Electoral College win and what may come of it in the future. Donald Trump's official White House portrait is a scarily accurate reflection of his presidency: It's objectively frightening, but people will still see in it what they want.

Trump wasted no time in releasing his official portrait, which was posted online while his inauguration was still taking place. The picture shows Trump with his signature scowl and red power tie, with an American flag and the White House in the background. Cara Finnegan, a communication professor at the University of Illinois Urbana–Champaign, told Vox that there is an objective difference between Trump's portrait and those of his predecessors. While most recent presidential portraits have shown warm, smiling faces in front of a subtler background, Trump specifically shot his in front of a green screened White House while being lit from underneath, so as to emphasize the intimidating persona he's trying to cultivate.

However, that objective difference may be overlooked in favor of partisan interpretation. “If you supported Donald Trump in the election, this might be an image of a very serious man for a serious time; he might look very committed and patriotic,” Finnegan said in the interview. “[But] if you opposed Donald Trump, you might find the opposite to be true.”

People saw exactly what they wanted to see in his campaign, too. Women who fully recognized the heinousness of Trump's actions were still able to rationalize their vote choice.

Despite directly saying that he intended to further restrict abortion, people were shocked to learn that he would further restrict abortion. Many people are still completely oblivious to the fact that he's gaslighting the country on purpose, because they have yet to encounter anything that personally negatively affects them (though many more may finally figure it out soon now that avocados are at stake). Just like his campaign and, now, his administration, Trump's portrait seems to be so clearly menacing from a liberal perspective, but supporters won't perceive it that way until he comes after their beliefs too.

Trump's White House portrait is unlikely to be the most lasting part of his presidency, but 100 years from now (when the United States still exists, I hope), it may be a visual representation of the dark political mood of the country right now. From the current standpoint of the political left, the portrait looks like a dark, looming vision of a future that is going to get a whole lot worse before it gets better.